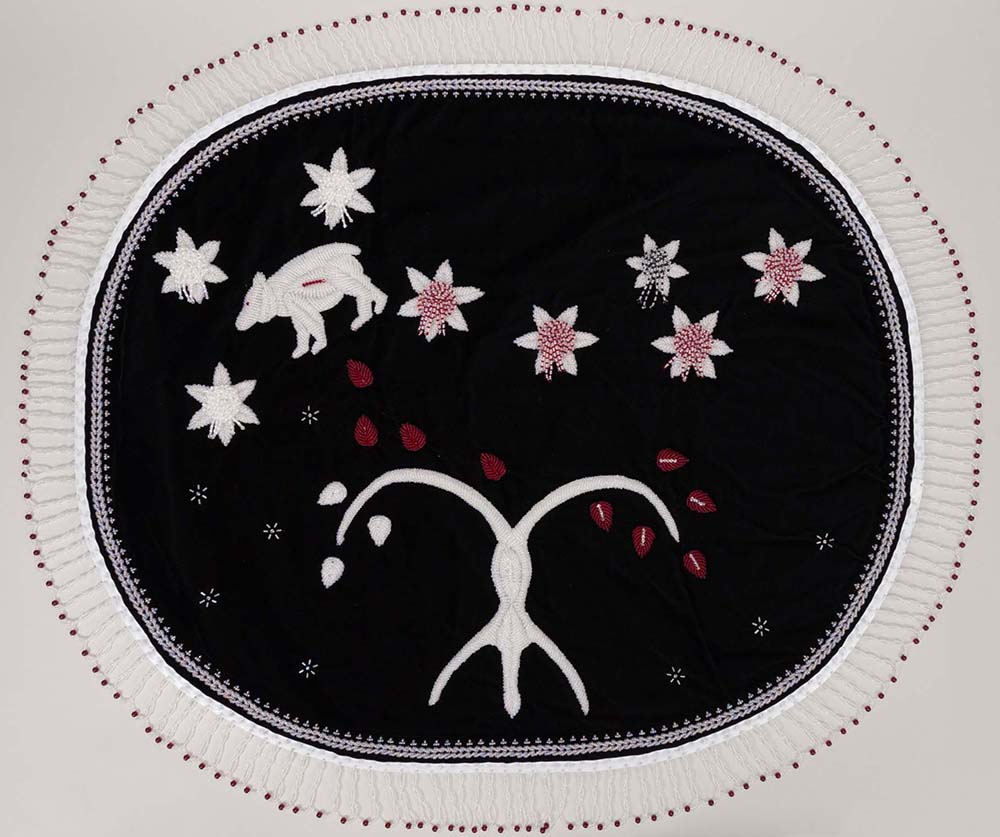 This weekend and next week, Indian Country is tuning in to music with a message, and streaming TV with an Indigenous edge.

Must-hear-and-see happenings include performances by a stellar storyteller and a hot hip-hop duo, a fascinating Chicago art show centering Native stories, and an announcement of the return of a breakthrough TV hit. 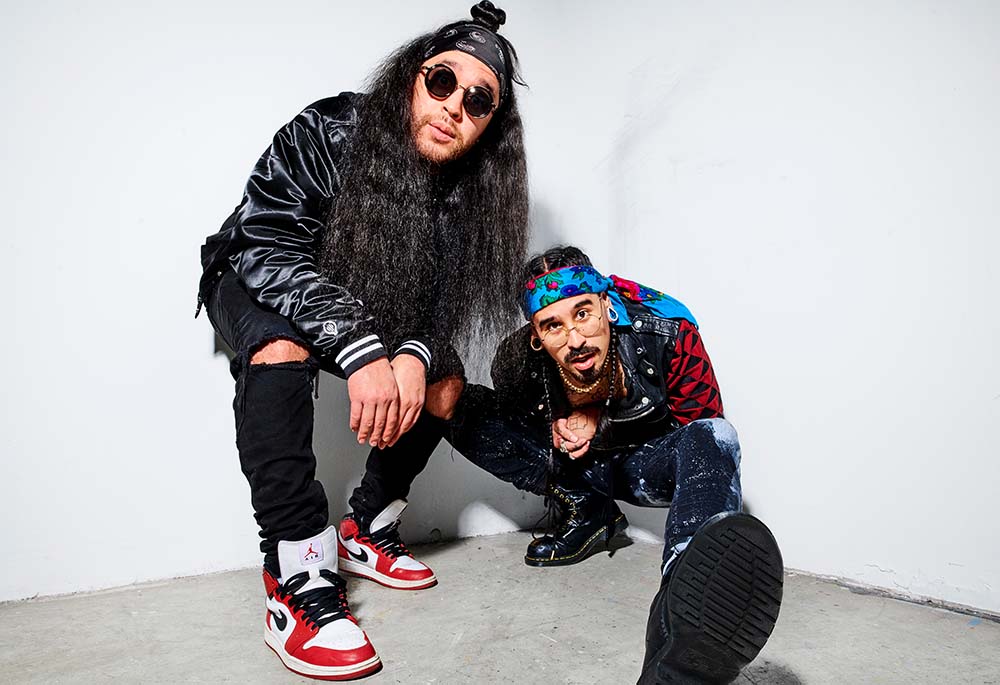 The Snotty Nose Rez Kids of Haisla Nation in Vancouver will perform at the JUNO Awards on Sunday, May 15, on CBC. (Matt Barnes)

The Snotty Nose Rez Kids are scheduled to get the house hip-hopping at the JUNO Awards -Canada’s version of The Grammys–this weekend.

Their latest album, Life After.., explores the effects the COVID-19 epidemic had on their lives, careers and community.

At the JUNOS, the Kids will be joined by Mohawk producer and artist DJ Shub, aka the Godfather of Powwow Step. a subgenre of club music melding Indigenous drumming and singing with modern beats and electronica to create  a soulful, otherworldly, and highly danceable sound.

Native Truths: Our Voices, Our Stories

A scene from a mural by Potawatomi artist Monica Rickert-Bolter. The mural is part of the exhibit Native Truths: Our Voices, Our Stories at the Field Museum in Chicago. The Native community preview for the exhibit is Saturday, May 14, and Sunday, May 15. (Ben Bolter)

This weekend, Indigenous community members can get a special sneak peek at Native Truths: Our Voices, Our Stories.

The exhibition, which highlights Native historic and present-day stories of sovereignty, resilience, continuity, and the future, is located in the newly renovated Native North America Hall.

The stories are illustrated with historical objects from the museum’s collection in concert with contemporary art, poetry, and photography created for the exhibition. There is also a section dedicated to Chicago’s Native community.

“This exhibition is as needed as ever,” Meranda Roberts, PhD, one of the co-curators for the exhibition and a citizen of the Yerington Paiute tribe. “Our country is at a precipice at thinking about how to come to terms with the horrendous ways it has treated our people, how to address that history, and how to ensure that it never happens again. I think this exhibition does a beautiful job at highlighting the way Native people should be celebrated and talked about in public spaces, like the Field Museum.”

Witnessing California basketry traditions passed on across generations, seeing the magic of music-making through the eyes of a young Lakota hip hop artist, and following the process of Meskwaki efforts to revitalize heirloom and ancestral plants are just a handful of the experiences awaiting exhibit-goers.

Potawatomi artist Monica Rickert-Bolter, aka Monica Whitepigeon (who is also a Native News Online contributor), has several works in the new show, and was one of dozens of Native Americans who provided input on how to transform the Native North American Hall into a  more authentic representation of Indigenous stories and realities.

“I was an Anthropology volunteer at the Field Museum back in 2017 and took notes with my friend Debra on how the Native Hall could be better. I never thought that in five years I'd have three installations going up for its Native Truths exhibition,” Rickert-Bolter told Native News Online. “There is a piece about a Native myth, an underrepresented societal challenger, and a new narrative about the Great Lakes. In the same vein of Indigenous Futurism, these artworks speak to our past, present, and future through the lens of a mixed-identity Potawatomi woman.”

The Native Truths: Our Voices, Our Stories exhibit opens to the public on Friday, May 20.

Hear Our Voices with Robert Lewis 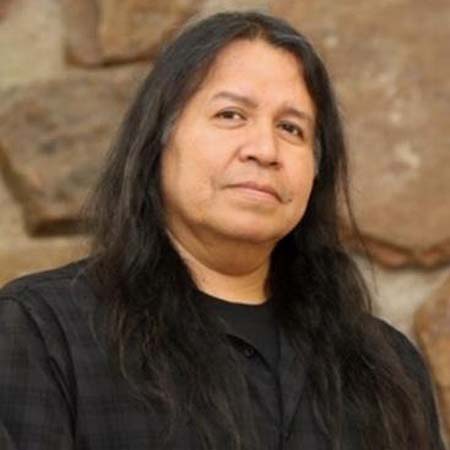 For Lewis, storytelling is a lifelong passion and pursuit.

“I heard my first story from my Father, who told me about the creation of the universe at the age of seven and I never forgot it,” Lewis said in a statement.

His presentation, an installment of MONAH’s Hear Our Voices series, will also be viewable online on MONAH’s YouTube channel.

Lewis, a school and community specialist for Cherokee Nation, was designated a Cherokee National Treasure in 2015, and has been sharing Cherokee culture with students and Indigenous communities for more than two decades

Attendees will also get to play a part in this family-friendly storytelling event. Audience participation is encouraged.

According to Lewis, storytelling is a living and breathing artform which is constantly changing, and each storyteller adds their  own flair and perspective to the  process.

“I believe Storytelling is an art form and as an art form in order for it to continue to be relevant to the present, the Stories must evolve as well,” he said in a statement. “One of the reasons I stress to those who enjoy these stories is that each Storyteller will tell the same story slightly different than what one may have heard before and in these retellings a new flavor is added and new awakenings are born.”.

WHEN: Premieres on Thursday, June 16 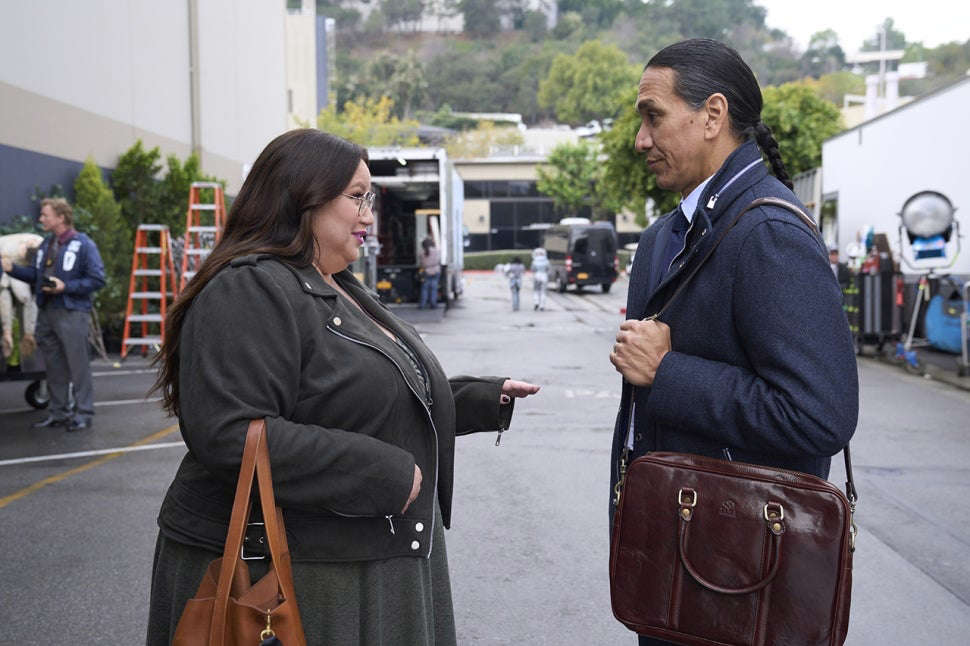 Michael Greyeyes and Jana Schmieding in Rutherford Falls, which returns to Peacock TV for a second season on Thursday, June 16. (Peacock TV)

Spunky Reagan Wells, canny casino manager Terry Thomas and the rest of their Minishonka brethren will return for a new season of Rutherford Falls, premiering on Thursday, June 16.

The streaming show set in the fictional small town of Rutherford Falls, is a deft send-up of political correctness and colonial entitlement  that  tackles current issues between Natives and settlers by dealing with the friction between the town’s invented Minishonka tribe and non-Indigenous citizens, with a focus on the unlikely and embattled friendship between proud, plucky Minishonka woman Reagan Wells (Jana Schmieding) and the well-meaning, yet clueless and privileged Nathan Rutherford (Ed Helms).

A breakthrough for modern-day representation of Native communities ,the first season of  Rutherford Falls was a hit with audiences and critics. Along with Reservation Dogs, it has opened the doors for more smart and authentic shows about the contemporary Indigenous experience.

Not much has been revealed about the new season, but Peacock is dropping a few hints and images to whet the audience’s appetite.

We do know there will be some new faces in Rutherford Falls, including Dallas Goldtooth, who plays the hilarious and wise Spirit on Reservation Dogs.

If you haven’t yet met the residents of Rutherford Falls, catch up on the first season here.