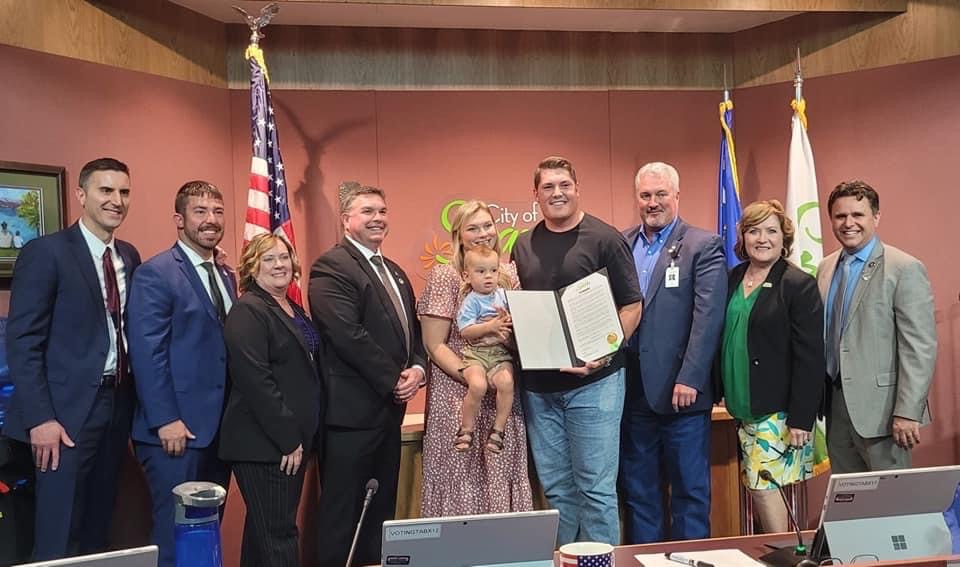 On Monday, the City of Sparks, Nevada dedicated April 25, 2022 as Austin Corbett Day. Austin Corbett is a citizen of the Walker River Paiute Tribe in Schurz, Nevada, and a former starting offensive guard for the Los Angeles Rams–the team that won Super Bowl LVI earlier this year.

“The City of Sparks is thankful to have an Austin Corbett representing our city and community at the highest level of professional football,” said Mayor of the City of Sparks Ed Lawson in the Austin Corbett Proclamation yesterday. “We congratulate Austin on this amazing accomplishment and wish him many more successful seasons in the National Football League (NFL). We also wish him the best of luck this upcoming season with the Carolina Panthers.”

Corbett was born and raised in the City of Sparks, and started playing football in Sparks Pop Warner leagues at the age of 7. He graduated from the Edward C. Reed High School in 2013 and earned varsity sports letters in baseball, basketball, football, track and field, and wrestling. He walked on the University of Nevada—Reno (UNR) football team in 2013 and started in 48 consecutive games.

Corbett was the 33rd draft in the 2018 NFL Draft and the first athlete to start in the Super Bowl from the Reno-Sparks region. He spent a season with the Cleveland Browns and was traded to the Rams in 2019.

“On behalf of the Walker River Paiute Tribe and our community, it is my honor and pleasure to congratulate our Tribal member on all his amazing accomplishments in his career and his personal life,” said Walker River Paiute Tribal Chairman Amber Torres in a statement. “We are here to celebrate you Austin, support you and uplift you on your new adventures ahead in life. You have set an outstanding example for our native youth across Indian [C]ountry to set their goals, and go after them.”

Post-Super Bowl win, Corbett was traded again and signed a three-year contract with the Carolina Panthers.