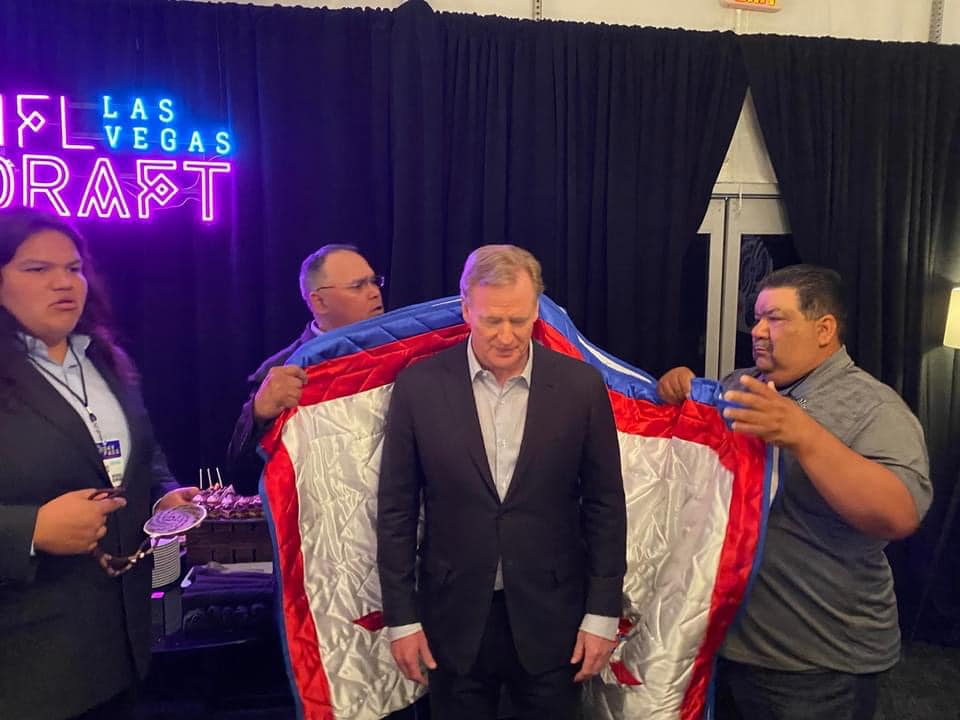 The 7G Foundation was invited by Goodell to attend this year’s event in Las Vegas and as a sign of appreciation, the organization gifted the NFL commissioner a star quilt made by Oglala Lakota Bessie Ann Ihanbla. They also gave a 7G Foundation hoodie and a woven medallion with 7G Foundation’s logo. The medallion was gifted to Goodell by Edward Hill, son of 7G Foundation’s founder Bennae Calac, who earned it in his participation in the 2nd Indigenous Bowl, an all-star football game that features football players recommended by their coaches from all over Indian Country, in 2018.

7G Foundation is also the organizer of the Indigenous Bowl.

“We weren’t sure he was actually going to do it,” Stopp told Native News Online. “We were so excited that he followed through with his word.”

“That medallion is a symbol of our organization,” 7G Foundation’s Founder and Executive Director Bennae Calac told Native News Online. “It’s also a symbol of discussions we’ve had with Roger Goodell and his staff, about diversification of the NFL from vendors to the executive office.”

“The NFL has become a real partner with 7G and we look forward to growing that relationship,” said Calac.

7G Foundation is hosting an all-star baseball game, Native American All-Star Showcase, in partnership with the Atlanta Braves. The event will feature some of Indian Country’s most talented and ambitious student athletes along with Major League Baseball (MLB) coaches, players, and executives. The event will feature training and tips by professionals in the sports industry including tours of facilities, presentations by executives and team building with some of the top baseball players in Indian Country.

The Native American All-Star Showcase is scheduled for July 16.