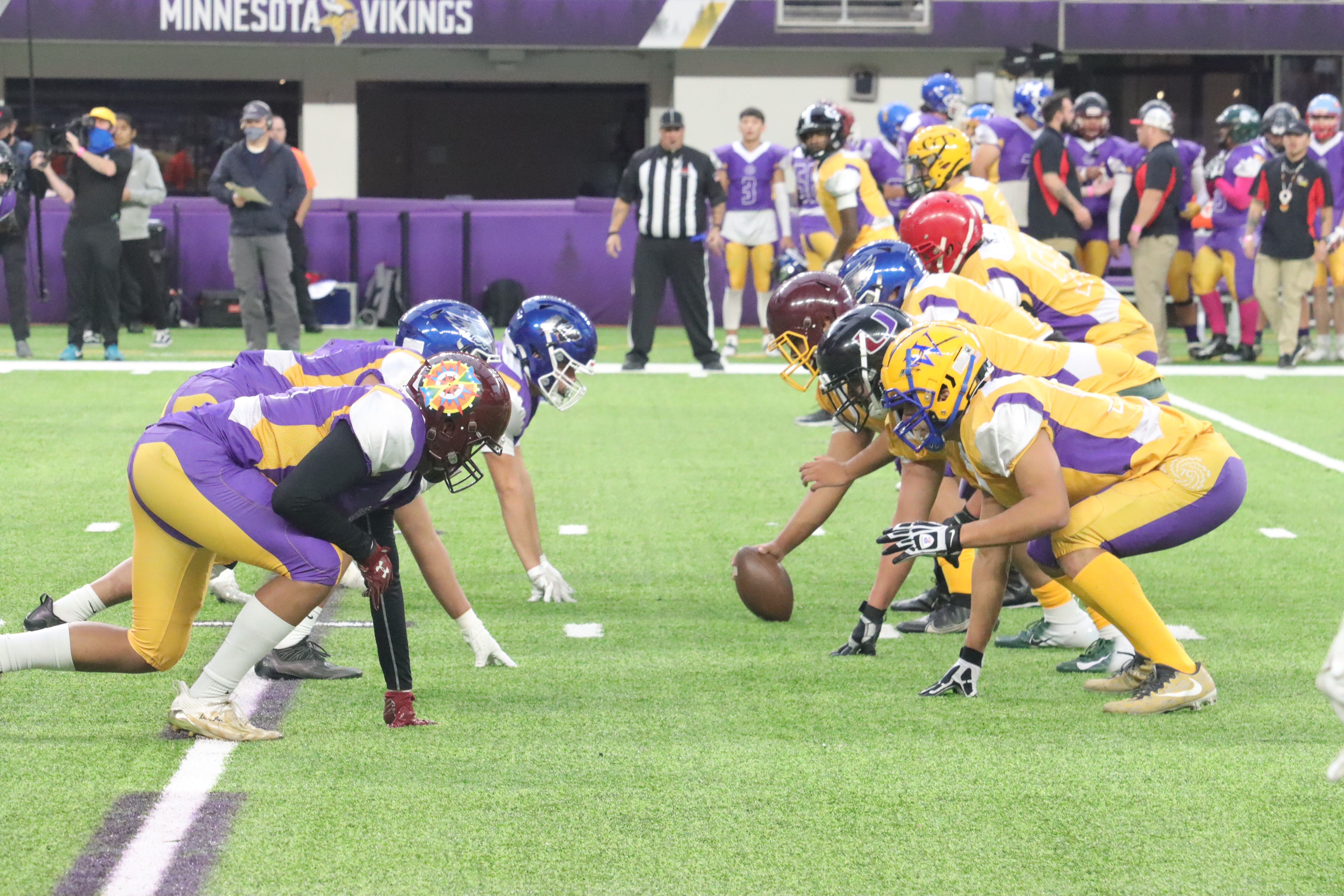 MINNEAPOLIS — On Sunday, the 4th annual Indigenous Bowl convened at the US Bank Stadium, home of the Minnesota Vikings, in downtown Minneapolis. Native American student athletes in their senior year of high school, recommended by their coaches to the 7G Foundation, along with their families and spectators from all over the country, traveled to Minneapolis to participate in a weekend of team-building and empowerment.

“As a Native woman and a mom, I’m super excited to be here, that we can host and showcase the best of our athletes, the best of our warriors, the best of our young men and families,” said Minnesota Lieutenant Governor Peggy Flanagan at the Indigenous Bowl banquet on Saturday. “This year has been incredibly difficult, for all of us, as we have been navigating through the last 20 months.”

Last year’s Indigenous Bowl was cancelled, like many other events, because of the coronavirus pandemic and organizers said they weren’t sure the event would continue. However, 7G, a nonprofit organization based in California, and the National Football League and the Minnesota Vikings decided to try to host the 4th annual event just 6 weeks ago.

It was the first Indigenous Bowl to be hosted outside of the Soboba Band of Luiseño Indians reservation near San Jacinto, California.

The event featured 54 Native American high school football players from more than 30 different federally recognized tribes from California to British Columbia, and many other states across the Midwest. It was the first time many student athletes left their state to get exposure to the professional sports industry.

“Indigenous athletes, starting at the Carlisle Indian School through Jim Thorpe, changed the game of football forever,” said University of New Mexico Assistant Professor Nick Estes during the banquet Saturday evening. Jim Thorpe was named All-American at the Carlisle Indian School twice and would go on to become an Olympic gold medalist, excel in basketball and baseball, and become the first president of the American Professional Football League, later known as the National Football League.

7G was founded by Bennae Calac, an enrolled member of the Pauma Band of Luiseño Indian of Pauma Valley, California, with the aim of developing Native leaders through education, athletics, culture and real-world support for the next seven generations. The organization’s biggest event each year is the annual Indigenous Bowl.

The game featured all Native talent, from singing the National Anthem by Oglala Lakota Sierra Bettleyoun to a halftime show by Little Earth Singers with a dance group. The game was announced by Ernest Stevens III, an enrolled member of the Oneida Nation of Wisconsin.

“It is a dream come true to participate in this event,” Bettleyoun told Native News Online.

“It was really amazing to be a part of this,” said Easton Laster, an enrolled member of the Oneida Nation of Wisconsin, of his participation in the Indigenous Bowl. “This was a dream come true.

The game was free and open to the public. Nearly 1,000 people watched the game. Players were divided up into two teams, Purple and Gold, with Gold winning 18-14.

“Everything went well this year. We were all so pleased with how our student-athletes were treated by the NFL, the Minnesota Vikings and the local community,” 7G Executive Director Bennae Calac told Native News Online. “We’re so glad we had all the support we had.