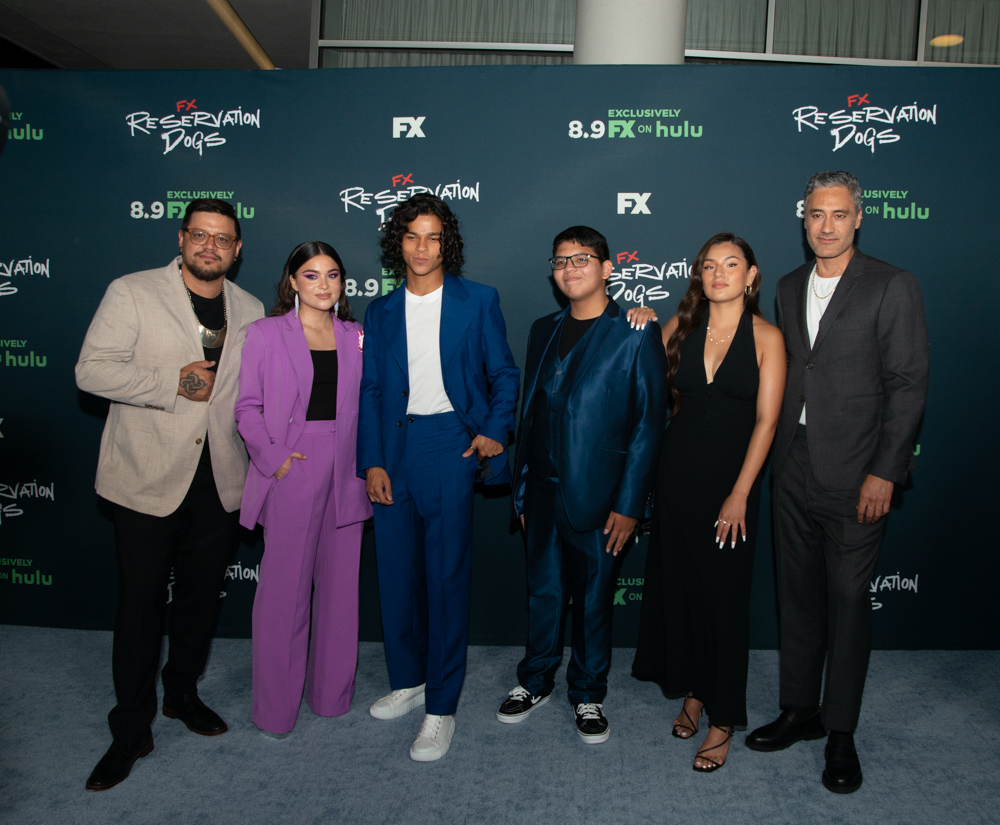 LOS ANGELES – The new series Reservation Dogs debuted last night at a star-studded red-carpet event at the trendy NeueHouse in the center of Hollywood.

The edgy new comedy series, which showcases ample Indigenous representation, has already garnered praise from the New York Times, which called it “an often gritty, often dark look at life on a modern-day Native American reservation.”

Some of the guest star actors also made carpet appearances, including Zahn McClarnon, Lil Mike & Funny Bone, Sten Joddi, Dalton Cramer, Bobby Lee, and Kirk Fox. Other writers and directors were also on hand, including Tazbah Rose Chavez and Sydney Freeland. Closing out the night was energetic musical performances by Indigenous rappers (and guest stars) Mike Bone and Sten Joddi.

QUOTES FROM THE CAST AND CREW

Devery Jacobs (“Elora Danan”) on what it was like working with an Indigenous cast
“Working on Reservation Dogs has proved to me that I thrive when I’m surrounded by community and collaborating with community. I have worked on many projects before where I am the only Indigenous person for miles, let alone the only queer Indigenous person for miles. I didn’t realize how isolating and lonely that experience was until I stepped on the set of Reservation Dogs and saw myself surrounded by community. It was such an emotional and empowering moment. It was unlike anything I ever experienced on set. For the first time, we’re telling an Indigenous story from our perspective. It truly felt like we created a space that was ours and non-Indigenous crew members were being welcomed into that space. From the beginning to the end, we all supported each other.”

Sterlin Harjo (co-creator, executive producer, writer, director, showrunner) on the cast
“We just got lucky and cast the right people in the right roles. They just jelled. It just came together. It’s my job to make them feel comfortable with each other, so there was some hanging out and just talking together, but there were no exercises. They just hit it off. In the end, it turned out better than I imagined. I knew it was going to be good, but I didn’t know it was going to turn out this good. Part of that is the support we had from FX, but also just the talent”.

D’Pharaoh Woon-A-Tai (“Bear Smallhill”) on prepping for his role
“There was nothing surprising. I felt the character was written for me. Really, what I did was learn about the community. I learned about every single nation— the 38 nations in Oklahoma. It’s about studying and learning. It was about appreciating the land and the people you’re speaking for.”

Lane Factor (“Cheese”) on his prior acting experience
“This is my first ever gig.  I’m 16, I was 15 when we filmed the series. I’ll see where I am in a few years, but I plan to keep acting. This was the first project I ever worked on and it was absolutely great. I learned a lot. First of all, there is a lot of waiting around. It was mostly about learning lines and trying to not look in the camera. I don’t know how many times we had to re-do a scene because one of us looked into the camera. It was a lot of little things, like learning my placements — hitting your marks.”

Sterlin Harjo on filming in Oklahoma
“I always film in Oklahoma. I kind of mythologize the place a little bit. It’s where I grew up and there’s something magical about it. I always try to create that feeling. Every episode has multiple stories or characters from my life. There’s so many.”

Zahn McClarnon (“Big”) on working with a young cast
“It’s amazing. You kind of thrive on it, that enthusiasm. Being with kids on a set for the first time, and how excited they were to be stars of a TV show. I could draw from that because, after a while, work can get mundane a little bit.”

Tazbah Rose Chavez (producer, writer, director, Ep. 106) on writing about reservation life
“There is no story I know better than this. I grew up on my dad’s res in California, so a lot of what you’re going to see on this show comes from different writers’ childhoods. In that way, this was the easiest thing I’ve had to write. I didn’t have to take on somebody else. With all of these characters, we all have that aunt, that cousin, that friend.”

Sterlin Harjo on the Reservoir Dogs/Quentin Tarantino connection
“Taika and I were talking about it. I think I remember Taika saying, ‘We should call it Reservation Dogs.’ And I was like, ‘Of course we should!’ Part of the show is, it has a lot of references, and that’s what Quentin Tarantino does. If there is one similarity to Tarantino’s work it’s that he references other movies—so we were giving him a shoutout.”

Paulina Alexis (“Willie Jack”) on her first big break
“Ghostbusters. I had a small part in that, but this is the first big gig where I actually got to get into my groove and show what I can do. Show my chops.”

Sten Joddi (“Punkin Lusty”) on being a musician/actor
“Music is always where I am going to go to. Music and tattoos are what got me out of hard times. It saved my life. Music is literally tattooed on my face. But this is my first acting job ever and to do it at this caliber, this level, is amazing. It’s crazy. Most people start as an extra or in the background. It’s zero to a hundred real quick.”

Lil Mike: “One thing I learned is when you learn a song, the song stays the same. But when you learn a script, and then go to the set, they can change it on you! (laughs). It throws you off if you’re a rapper. You had a rhythm to it down.”

Funny Bone: “We adapted really well, though. The directors really loved how we flipped it and threw our two cents in. We came naturally with it, and I think they really digged that.”

Lil Mike: “But it’s really been surreal. There’s a lot more media involvement in this than in the underground rap scene.”