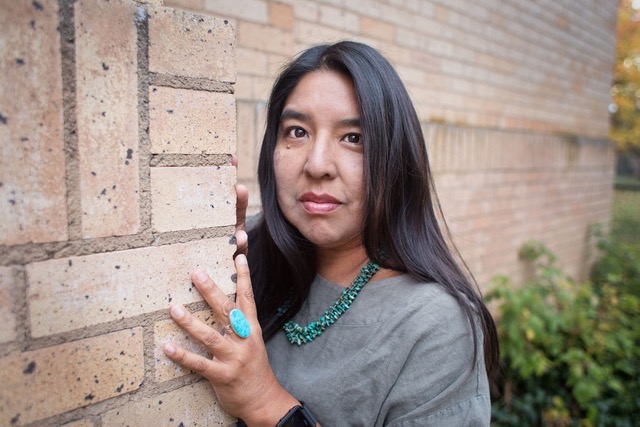 Poet and artist Esther Belin, Diné Navajo, spoke with Native News Online about her recent role guest-editing the July/August issue of Poetry Magazine, which features a collection of poems dedicated to Land Acknowledgement.

Belin has been writing poetry for more than 30 years since her undergraduate years. She currently teaches at Fort Lewis College in Durango, Colorado as part of the school’s Indigenous Studies Program.

What inspired you to use poetry as a medium for your thoughts, views, and experiences?

I think the biggest thing for me about poetry was that it’s your own voice. Meaning you didn’t have to be so conscious as in more traditional writing forms like complete sentences or paragraphs. The grammar of poetry is very different. You can create your own structure and your own language.

I think some of my favorite poets embrace that idea of being able to create a whole new context of how we communicate and use writing for that, like letters on the page, and things that aren’t on the page as well. It really is about things that are left out of the conversation.

That spoke to me quite a bit because of my experience as a Native American woman and young girl. My parents went through the boarding school process; they went to school in the 1950s at Sherman Institute in Riverside, California. I grew up in the LA area of Southern California, having those interesting dichotomies daily. Like, here we are, a Native American family living in an urban center where both my parents spoke the language at home. We did things that were very cultural at home, yet I was being educated in this really foreign landscape.

And also, from an early age, no one had to tell me that the things that we were learning excluded my experience — the Native American experience, the Indigenous experience. I think that definitely influenced a lot of the writing piece.

There’s a strong sentiment that Native Americans aren’t able to write, or that Native Americans are super silent and aren’t able to offer critical thinking perspectives, which is completely untrue. I feel like what was needed was that bridge to really connect. I felt like poetry was able to do that and was a really good kind of connector for that.

Being a direct descendant of boarding school intergenerational trauma, would you say that plays a part in the message you’re trying to convey in your poetry?

Oh, it’s a huge part. It’s so integral from before they even had that word: intergenerational trauma. When I went to UC Berkeley, at that time, there was a Native American psychologist there, Bonnie Duran. She and her husband started these concepts and ideas about psychic wounds like there’s something going on in terms of our identity that’s affecting our ability to have engagement with the land that we’re on or the community that we’re in. I really dug into this idea of identity politics. A lot of my art encircles that.

I have been working personally on my own trauma for at least 15 years super intentionally, which includes not only Western therapy but tribal healing, my own healing through writing, and so much so that I, about ten years ago, I worked at an inpatient Native American treatment center for substance use. I became a licensed addiction counselor here in the State of Colorado. Basically, everything was trauma related — if it wasn’t immediate in their own memory, it was the intergenerational trauma.

I did a lot of art and writing through grief and trauma when I was there. That helped me, listening to their stories. My ability to talk about these things without being completely in tears and in an articulated way, is not only because I’ve worked at it, but I have benefited from people who shared those stories with me.

I always acknowledge that. I’m only able to speak because people not only prayed for me, they sacrificed, they struggled, and they shared those stories and those prayers that I’m benefiting from, and I think that’s huge.

When I teach students about these ideas, it’s not just the facts. It’s more of a contextual comprehension which is really hard, and you have to take time with it. I feel like sometimes people have been overusing those ideas of intergenerational trauma or de-colonialism and not truly understanding what that is. It’s a way of living, a practice, and no one’s perfect at it. We need to be checked on because just because I’ve been doing the work doesn’t mean I’m not going to create more harm.

What is your experience with your poetry/writing getting watered down or changed by editors?

My experience with that is mostly on my end, the internal end, and what I mean by that is that mindset of ‘my work is not good enough. Nobody wants to hear it. I think there are quite a number of writers where that entire internal battle prevents them from not only writing but having the courage to read aloud to other people. I see that a lot in some younger people when I do poetry workshops at reservation schools.

There’s like, ‘I don’t have anything to say, and nobody wants to hear it. To me, that’s the biggest thing for Indigenous writers right now.

That’s what I like about poetry. To start in poetry, it’s OK to begin in silence. That’s part of it because something is happening in there, the person’s breathing, thinking, and formulating still, like we’re not ready yet to actually articulate it.

The fact that I was published was just a miracle. There were some conversations with editors like, I want to keep this or they wanted to change this or do that, so I think that’s another battle. When you publish, you’re not always aware of when your work is accepted.

Before, I thought, ‘Oh, you’re the experts. Whatever you think is good,’ because I’m just so happy to be getting a book published. Now the publishing world has changed a bit. I think it’s open a lot more. People of color are part of the publishing world, even in the big publishing houses. So they are seeking these voices.

There’s still such a vacuum and misinformation about Native American history and experience and what’s available is the smallest representation of what’s out there.

What is the biggest thing you want people to take away from your work?

There’s been a lot of talk about ally-ship these last few years and white privilege. The big thing for me is for the audiences to know that there are Native writers out there and they have a vast container of stories that are ready to be told. Some are holding on and waiting still, but they’re formulating.

The other thing I think is for the non-Indians to really understand that to understand our experience, it’s great to be a fan of our work or a collector of our art, but I feel like they have to do so much more to be a true ally.

Use that power, that privilege, to start talking about change in their community. Whatever side of the spectrum they’re on, to not just say, ‘Oh, I have an Indian friend,’ but start being active in their area around land issues or around the changes in monuments or being more inclusive because every place in the United States not only has history, but has an Indigenous presence

I think for those folks to understand that, then that’ll make it easier for the writers and artists to come out. So we don’t have to do all this education, all this explaining, and then I can finally have a conversation with you. I’m constantly educating these people about really basic things and how draining that is, how inequitable that is. There needs to be a little more balancing. I’m really hoping that these last three additions to the magazine changed the scales a little bit.