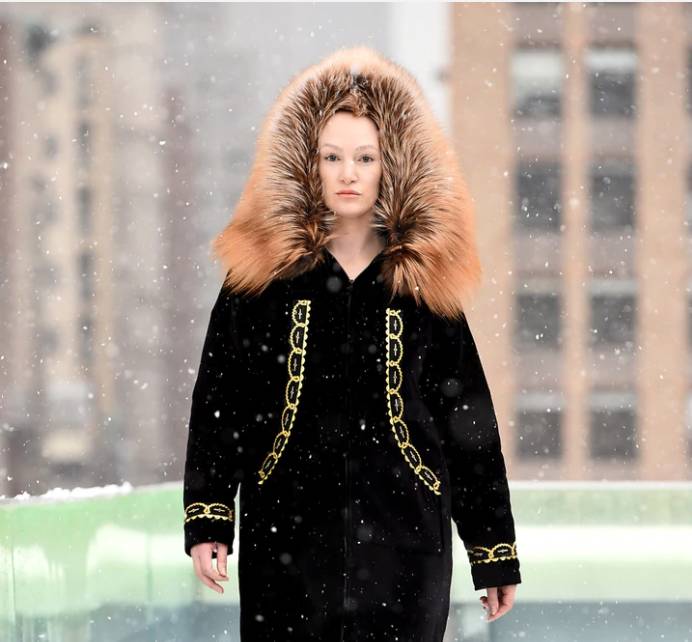 “All of my models were so happy,” Brower, 36, told Native News Online. “They're like ‘finally! An appropriate thing to wear on the runway.’ It was perfect for my collection.”

Eight professional models donning Brower’s designs are captured in photographs strutting down a rooftop catwalk in Manhattan’s SoHo neighborhood, comfortably adorned in the felted parkas with elaborate fur hoods and trim as the snow dusts down.

But the coats aren’t just meant to look warm, Brower said. They’re meant to keep wearers warm in subzero temperatures, down to -50 Fahrenheit.

“It's part of our culture,” Brower said. “Being Alaska Native and growing up in the Arctic, it’s survival gear. It’s not just, ‘I killed these animals so that I could wear fashion.’ It's about keeping my kids warm and keeping my family warm.”

Brower, the designer behind Arctic Luxe, traveled over 4,000 miles last month to make her career dreams come true. After she learned she’d been accepted into New York Fashion Week last April, she began preparing eight atigiit, or parkas, at her home in Anchorage, where she’s recently relocated from her hometown in the Arctic, Utqiaġvik.

One of the male coats was made from sealskin pelts Brower salvaged from a big storm last year, when around 40 dead seals washed up on the beach in Utqiagvik. Brower and her brother were able to skin nine of them, and used the meat to feed animals at the beach.

That coat will now be shown on loan as part of a nine-month long exhibit at The Museum of International Folk Art in Santa Fe, New Mexico.

In the end, she said the exposure from New York Fashion Week was well worth it.

“I'm a single mom of four kids. So it was really hard for me to hold on to all my parkas because it took me about a year to prepare everything,” she said. “But I didn't only do this for myself, you know, I feel like I represented Alaska Natives as a whole. I think it was really needed for people, especially our young people.”

Although Brower wasn’t able to bring her own models to the show, her next big event— Indigenous Fashion Week Toronto, Canada this June—will showcase her work on exclusively Indigenous models. She said that the more exposure her contemporary Iñupiaq wares gets, the better it will be for young Natives like her children.

“There's still a lot of racism and hate towards Natives,” she said. “Being able to show that I went to New York Fashion Week and showed Alaska Native culture on the runway is crazy. I don't know what will come out of New York Fashion Week. I can't wait to see what things are going to come next.”