Native in the Arts Spotlight: Visual Artist Andrea Carlson Talks About Her Chicago "You Are on Potawatomi Land" Mural 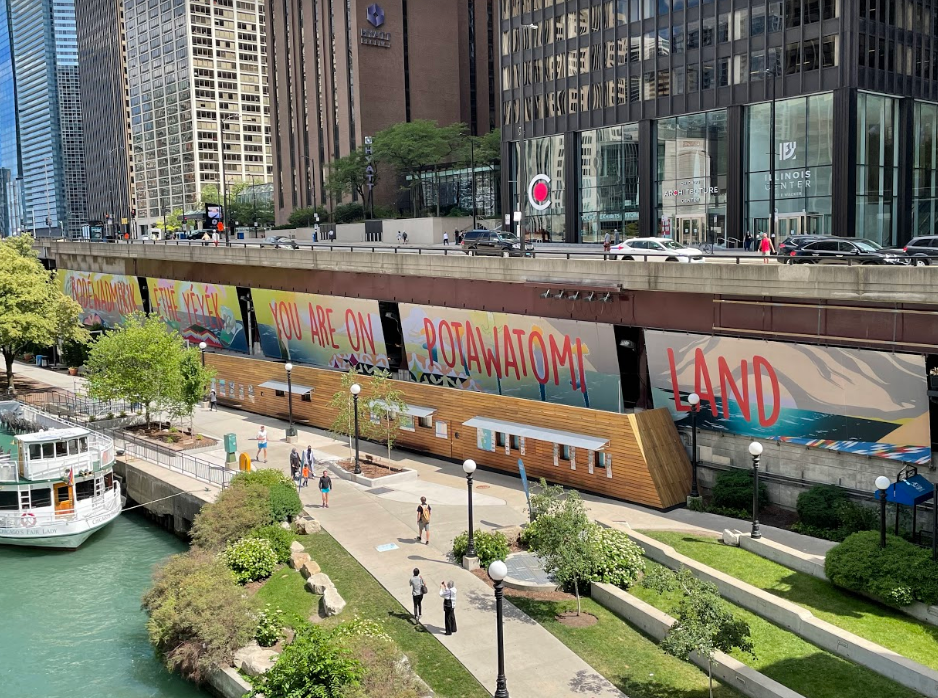 CHICAGO —The “Windy City” is undergoing a cultural reckoning, especially within the public art scene, and Native people are making their presence known. Just below the city’s ever-changing skyline is its RiverWalk that caters to tourists by offering architectural boat tours and restaurants/bars along the southside of the Chicago River. Above the ticket stands is a mural with an eloquent reminder, “Bodéwadmikik ėthë yéyék/You are on Potawatomi Land.”

The multilingual mural was created by local Ojibwe artist Andrea Carlson. It was installed this past June and will be on display for at least the next two years. The project was designated before Chicago’s recently established monuments committee, which was created in response to last year’s protests against the Columbus statues and aims to rectify monuments throughout the city. Carlson is not on the committee but recognizes the need for transformative change and utilizes her paintings/drawings to reference cultural narratives in resistance to institutional authorities.

In a recent interview with Native News Online, Carlson explained her perspective and take on this project.

What is the official name of the project? What are the dimensions? What material did you use? How did you create it?

The piece is called “You are on Potawatomi Land” and its overall dimensions across all five banners are 15’ high by 266’ long. The original artworks are five oil paintings on canvas. These paintings were scanned with a large format scanner and the digital files were blown up to accommodate the incredibly large format of the banners. The text was digitally added. The images were then printed on a mesh that allows the wind and air to flow through it.

I got a lot of help.

What are you hoping people will take away from your mural?

The phrase “Bodéwadmikik ėthë yéyék” (You all are on Potawatomi land) is a simple statement of truth in a sea of settler fantasies in that particular area of Chicago. Within a block of the banners is an image of a dead Native man on DuSable Bridge, there is a Blackhawks merchandise store, the former site of Fort Dearborn, and many people in Chicago don’t know this, but the man-made lakeshore is unceded. So, the audience takeaway should be a simple moment of truth in a harmful and antagonistic area of the city.

Tell me how the project came to be and why you’re so passionate about Potawatomi representation in the city.

I’m Ojibwe, and I moved from Minneapolis, which is Dakota country, to Chicago about five years ago. I was thrilled to finally be on Anishinaabe/Nishnabek land, but it didn’t take me long to learn that the Potawatomi were removed and exiled from Chicago. That historic removal takes on new forms to this day. The location of the Zhegagoynak (Chicago) is in the very heart of Potawatomi’s traditional territory. Although Ojibwe and Potawatomi people are ethnically related and we hold each other close, I don’t want to prioritize my sense of belonging. I don’t want to participate in the prolonged displacement Potawatomi people.

I must confess, it took me a while to get, as you say, “passionate about Potawatomi representation” in Chicago. When I was thinking of texts for the banners, my first thought was for it to say, “Former Shoreline” because, indeed, that area of the river was a shoreline before the settler, man-made land was extended into the lake. I also considered “You are on Stolen Land” but that seems to be focused on the past, centering the settler act of stealing land. Bodéwadmikik ėthë yéyék (you are on Potawatomi land) seems more hopeful, and it is a statement of perpetual belonging for the Potawatomi people. I want you to see it and feel seen, not erased. “You are on Stolen Land” doesn’t give me that same sense. “You are on Anishinaabe Land” was also considered, because I was hoping that the word “Anishinaabe” would provide me with cover from Native nations who like to see ourselves mentioned. When I asked Kyle Malott (Pokagon Potawatomi) to translate the English to Potawatomi for me, he changed Anishinaabe to Potawatomi, and I thought about it for a second, and thought, “Yes, he is right.” That specific land where the banners fly was contested, and it was the Potawatomi who came back and fought for it.

Without getting into too much legal talk, the Pokagon Band of Potawatomi sued the city claiming that the man-made lakefront violated the treaties and was not part of the original agreements. The Supreme Court of the United States—big shocker—ruled against them in Williams v. City of Chicago, 242 U.S. 434 (1917) claiming that the Potawatomi “abandoned” the land. The Trail of Death, which is the name given generally to the removal of Potawatomi happened before the shoreline was built out, but we must remember that Native removal isn’t a singular event of removal, but rather, a prolonged exile. SCOTUS’s decision over Potawatomi belonging and Chicago’s lakefront is incredibly hostile. If anyone wanted to read into this decision, I strongly recommend reading John Low’s book Imprints: The Pokagon Band of Potawatomi Indians and the City of Chicago (2016). John Low’s book and friendship was a big inspiration for this banner piece.

Another reason I chose those words for the banner piece is the current #LandBack movement. This movement of rematriating the land means that we as Native people must start thinking of these historic cases. The Pokagon Band came back for the land. They had used their resources to sue and made a case for the lakefront on behalf of all Potawatomi people. I wanted my piece to bow to those Potawatomi ancestors whose hearts were broken with that decision. I want to make sure that Potawatomi people know that they are home when they see this work.

This area has historical significance as the former site of Fort Dearborn and the bridge commemorates it with a statue of white settlers and a dead Native man. What do you think would be a better way to permanently (or not) signify the history?

There are images of violence towards Native people all over that area of the Chicago River. These images normalize anti-Indigenous violence. It is a harmful place, but it could be a place of healing. I would love to see Native-made art all over the city. I worked with Lydia Ross at the Department of Cultural Affairs and Special Events (DCASE) for You are on Potawatomi Land. We had started working on it prior to the pandemic, well before the Columbus statue was removed in Grant Park.

If I were to make recommendations, I think that a formal and ongoing program where Potawatomi and other Native artists are supported by the city is needed. Foundations and other institutions that are highly visible need to adopt the language of supporting “Chicago based and displaced artists” that recognizes that Potawatomi people and their artists will always have belonging here.

The city erases us, but artists can draw us back in. To your other question: I don’t know if artworks need to be permanent, as long as we are always present. You are on Potawatomi Land will be up for years, but it will eventually come down. I would be thrilled if the next artist to make a banner project in that location was Potawatomi.

You’ve done a lot of social justice work in Minnesota and at institutions in different states. What’s your experience been like in Chicago/Illinois?

It is weird because I find myself clinging to a small group of artists here (including Monica Whitepigeon). We are in the process of starting up the Center for Native Futures, a Native artist-run art space in downtown Chicago. The city is so big that I think that we are like ants on the surface of water clinging to each other to stay afloat. We are aiding each other’s wellbeing and survival, unlike crabs in the bucket, which Chicago has plenty of.

I could speak at length about institutional abuse, specifically about museums. They are not so different from city to city. They all read from the same colonial playbook, and their healing processes are also looking very similar. Some things are incredibly disheartening about Illinois. I am on the Illinois State Museum board, and there are seven thousand ancestors in the collection, but that will change soon.

That [email protected]#$ing mascot! The Blackhawks team reaches into its pockets to make it seem like they are different from other Native mascots. They try their hardest to make it seem like Native people approve of it. The Columbus Day Parade in downtown Chicago is a white supremacy march. No Indigenous Peoples Day here. We get nothing here. We have a lot of work to do in Chicago.

What are some other projects you’re currently working on?

I’m working on a large painting right now called Cast a Shadow. It is full of references to Native memory work and memorial practices, and it has a sculptural component. Effigy poles will be installed in Infront of the painting and obscure it. I am also working on a painting about a fantasy I have about Michigan returning Isle Royale to Grand Portage Ojibwe people. I’m also researching materials for two major commissions, but I’m not allowed to talk about those yet.

What’s your advice to others who want to see more accurate Native/Indigenous representations of their tribes in cities?

Listen to Native people. Go to our presentations, our exhibitions, and read our books. Antagonize the settler mentality that lives in your head -- I must do that too. Question institutions that don’t acknowledge the Indigenous land that they are built upon. If you live in Chicago, pay attention to your alderman and their views towards things like the initiative for replacing Columbus Day with Indigenous Peoples Day. Stop Line 3, give the movement money to bail out Water Protectors. Help us with these things so we can focus our time on our robust survival, our joy, and our healing. We can tell our own stories. Take a class in American Indian and Indigenous Studies. I could go all day.