Columbus Statues in Chicago Removed Overnight After Week of Protests 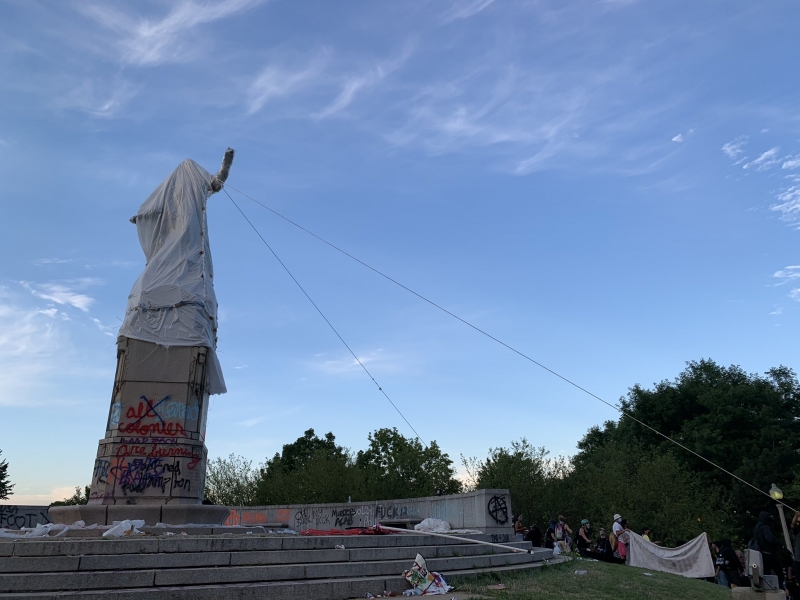 CHICAGO — In the early hours on Friday, two statues of Christopher Columbus in two Chicago parks were taken down. Crowds cheered and passing cars honked as cranes removed the monuments from where they once stood, making Chicago the latest American city to bring down statues of the Italian explorer responsible for the genocide and exploitation of Indigenous peoples.

After an intense week of violent clashes with police and attempts from protesters to pull down the statues, Mayor Lori Lightfoot made an unexpected move and ordered an overnight removal of both Columbus statues from Grant Park and Arrigo Park, which had become the scene of civil unrest. They will be placed in storage until further notice.

Mayor Lori Lightfoot has Christopher Columbus statue removed from Chicago’s Grant Park under the cover of the night.pic.twitter.com/my9JKQ1UBW

What started off as a peaceful protest last Friday led mostly by youth organizers ended in violent confrontations with Chicago Police Department officers.

As the night progressed, CPD presence increased around the monument but protestors managed to tie ropes around the Columbus statue and attempted to pull it down. 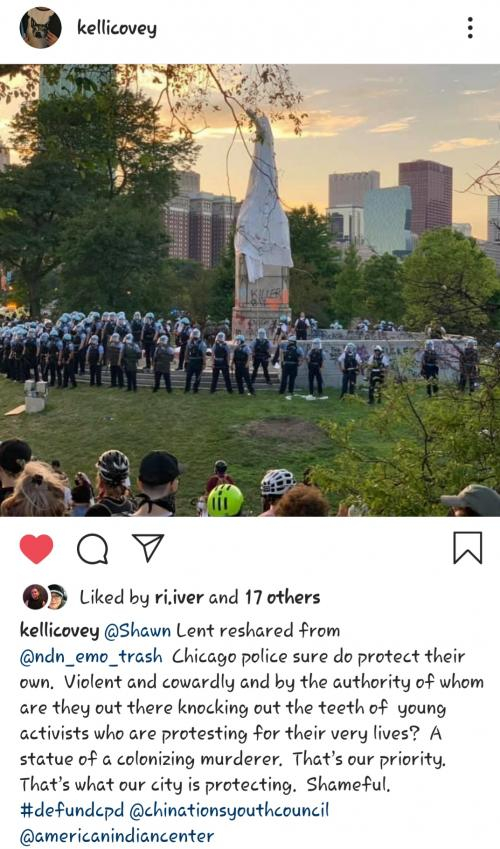 Tensions flared when unknown participants started throwing frozen water bottles, fireworks and other projectiles at Chicago officers while they used pepper spray and other excessive force against protesters.

In the end, dozens of protesters and nearly 40 officers suffered injuries. The Civilian Office of Police Accountability is investigating more than 20 complaints that have been filed by demonstrators.

“The Chicago Police Department was founded before the city of Chicago in 1830 as part [of] the Indian Removal Act,” said Chi-Nations in a recent Facebook post. “Since they were founded the police have continued to target Indigenous and Black peoples. We recognize our struggles are intertwined and stand in solidarity with each other's communities, we will continue to work together until we are all free.”

The post also included a video that highlights their message of Black and Indigenous Solidarity, a call to disinvest in the police and to instead invest in community organizations and featured local activists such as Dallas Goldtooth (Mdewakanton Dakota and Dine) from the Indigenous Environmental Network, Jae Rice from Brave Space Alliance and 18-year-old Miracle Boyd, who is now permanently missing teeth after being hit by a police officer on Friday. 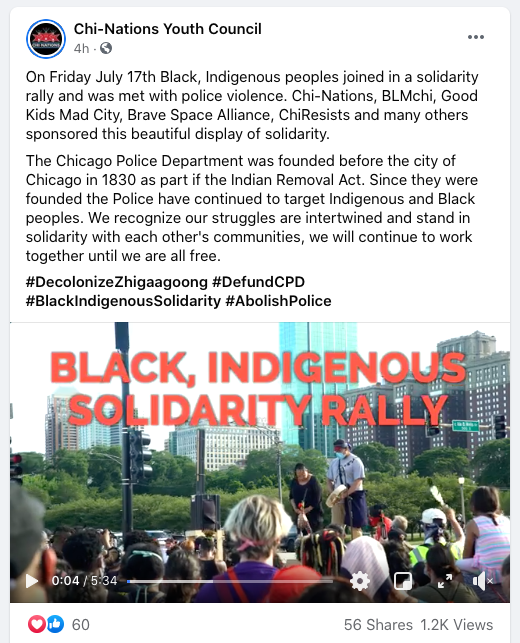 At a press conference on Monday, Mayor Lightfoot commented briefly on the violent outburst and the city’s action plan for inventorying controversial statues, monuments and other artwork that acknowledge Chicago’s fraught history.

Lightfoot said Friday’s rally was originally meant to uplift stories of Indigenous people in Chicago, adding that she supports the effort.

“Unfortunately, what we saw… is a group of vigilantes — people who came for a fight, not a peaceful protest. You’re going to see video that shows these people before they got to the Columbus statue kneeling down, dressing in all black with goggles, forming a phalanx with umbrellas and with shields around them and then pummeling police with projectiles,” Lightfoot said.

Lightfoot did not offer any specific plans nor did she share her stance on the removal of statues like Columbus. In June, Lightfoot said she didn’t believe the statue should be taken down, and that it serves as a “full history” educational tool.

Last Friday, anti-gun violence youth group GoodKids MadCity and activist Ja’Mal Green responded to the protests and Lightfoot’s response. Demonstrators held a press conference in front of the statue at the intersection of Columbus Drive and Roosevelt Road.

The Trump administration started targeting major cities with large-scale demonstrations and claims it will send federal agents to Chicago by this weekend. The Department of Homeland Security plans to deploy 150 federal agents for a 60-day duration to crack down on the city’s increased clashes. Mayor Lightfoot warned against such acts as it will only fuel more discord among protesters and law enforcement. This has led other groups to speak out.

As of this year, Chicago’s police department budget is $1.6 billion, which equals to more than $600 per resident spent on policing.

“Right now, we’re paying the police to kill folks like me, that’s what’s happening,” said Ald. Jeanette B. Taylor (20th), one of six democratic socialists on the city council. “We can’t get a nurse, a social worker or a counselor in schools, but we can always afford more police? That’s not common sense.”