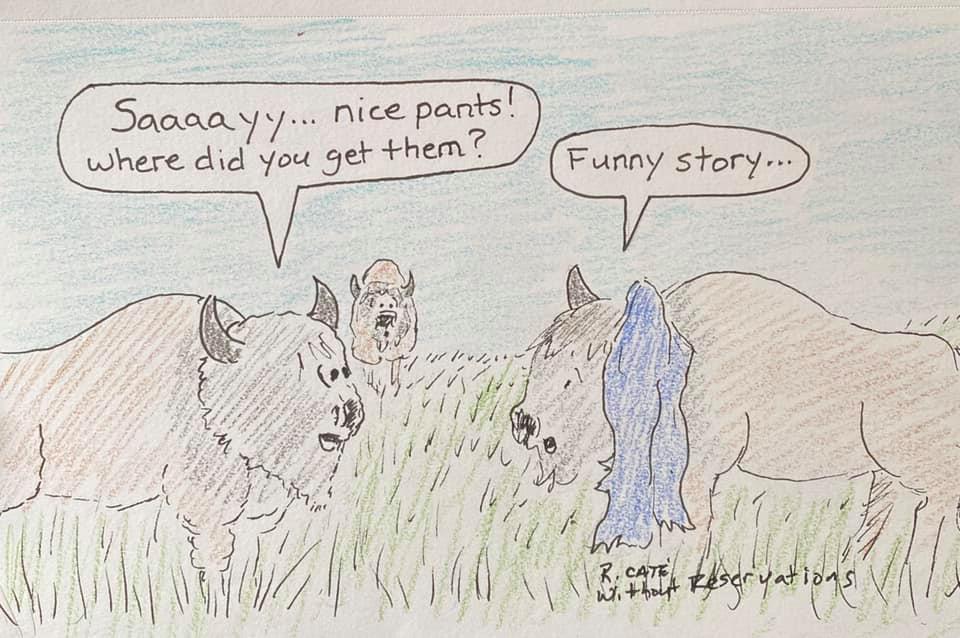 An act of nature in South Dakota’s Custer State Park has unleashed a stampede of cheeky, cautionary creations.

The art started about a week ago, when an Iowa woman’s foray into wildlife photography brought her way too close to a mother bison and its calf. A male bison charged the woman, hooked a horn into her jeans, spun her around in the air, and deposited her, minus her denim pants, onto the earth.

The woman survived, and video capturing the ordeal produced the now infamous image of her former pants hanging from her assailant’s horn.

Now, the jean-hanger bison is being memed all over social media, and Indigenous artists are finding it irresistibly inspiring.

In several of the works, artistic license was used to substitute a buffalo for the bison.

Native News Online rounded up some prime pieces from the Bison Art Attack movement for you to observe at a safe distance. 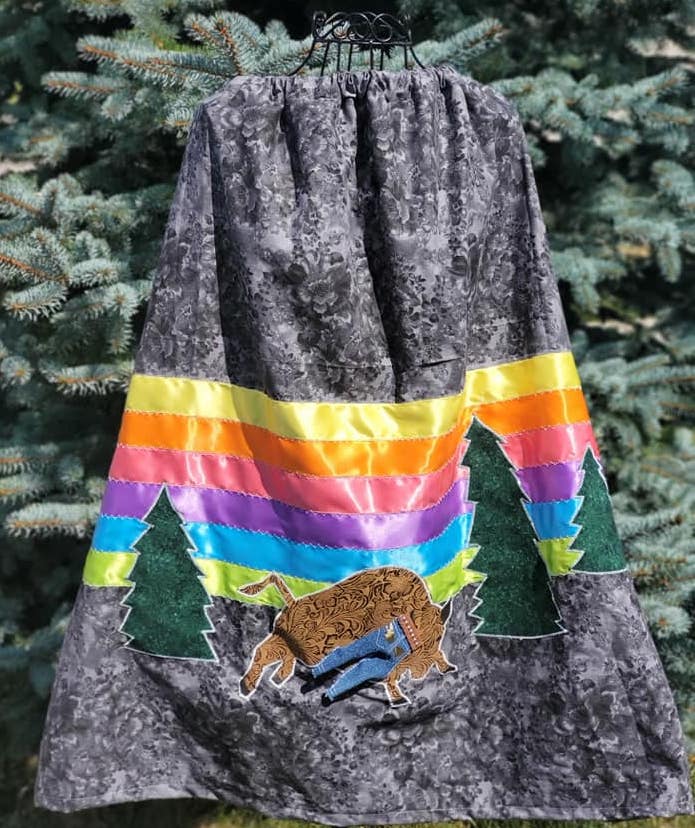 Oglala Dakota mother and daughter Cindy Schippacase and Isabella Allison made a ribbon skirt together in response to the recent bison attack in South Dakota. (Cindy Schippacase)

The statement: The Lakota phrase Nuge Wanice means “no ears,” and Schippacase said it references the woman who dared to approach the mother and baby bison.

”It’s a phrase we've heard from our parents and grandparents when we failed to heed warnings. I saw people turning out cartoons and art about the attack and I told my daughter, let's do this before anyone else. So it was a late night project but we had a good time. The materials were things we had on hand, cotton fabric, satin ribbons and faux tooled leather for the bison. I had fun with the details of the tiny jeans, but also the whole ordeal with the bison was a serious reminder that people can be put in their place rather quickly.” 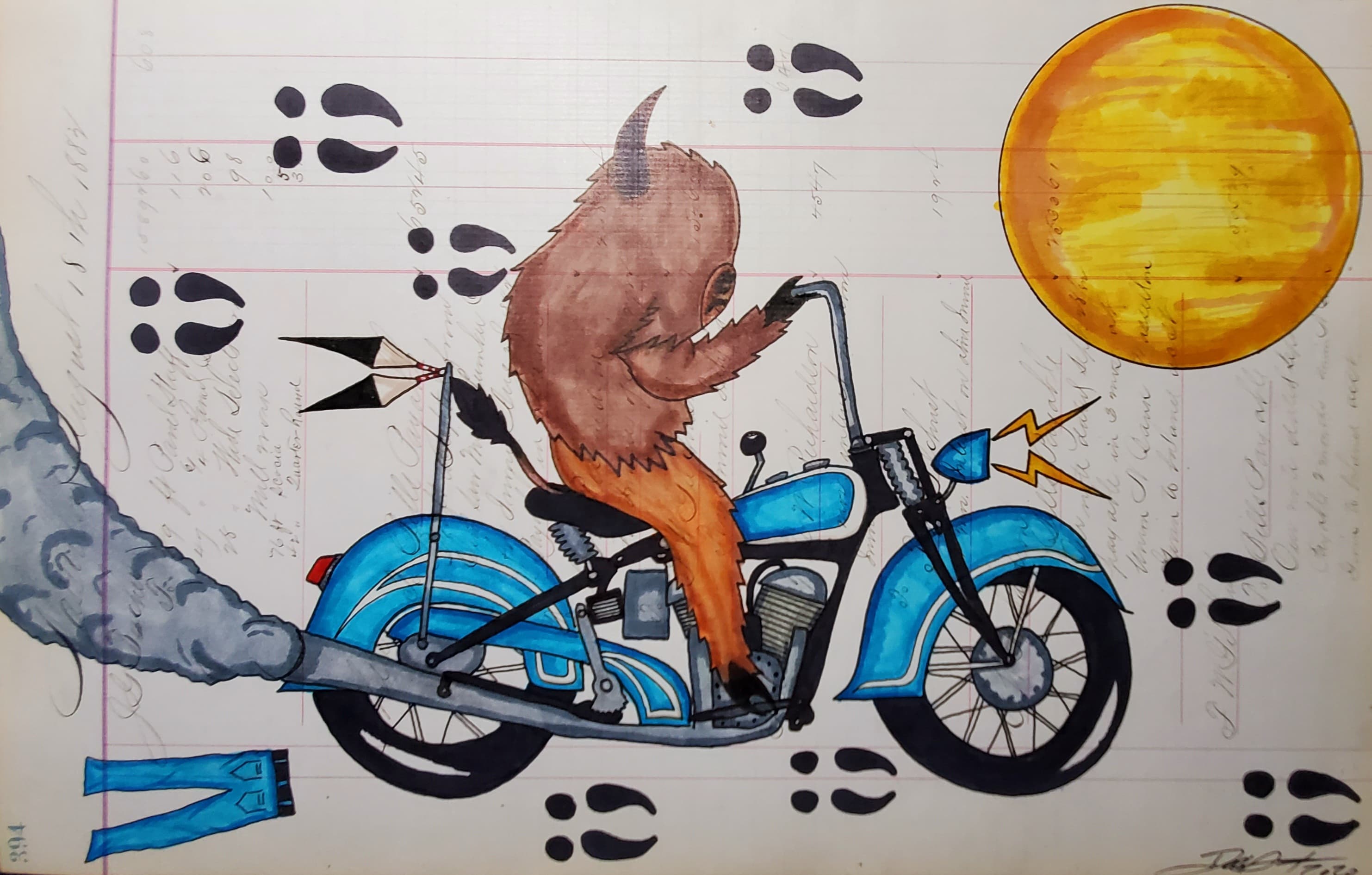 The statement: In a piece that strays from the jeans-on-horn theme, Atcheynum played off the fact that a group of bikers were at the scene of the incident.

“I made it like, I don't want the pants, give me the bike! I always think outside of the box when creating art. I’m from the Buffalo Society, so a lot of my pieces have buffalos in them and when I saw that I had to create something different. That piece is on an 1882 document, and I used archival ink and alcohol based inks. Ledger art is one of the oldest forms of our art. We would draw stories of our battles and hunts to remember events that happened. I do modern things as well as it's current history that we all go through.” 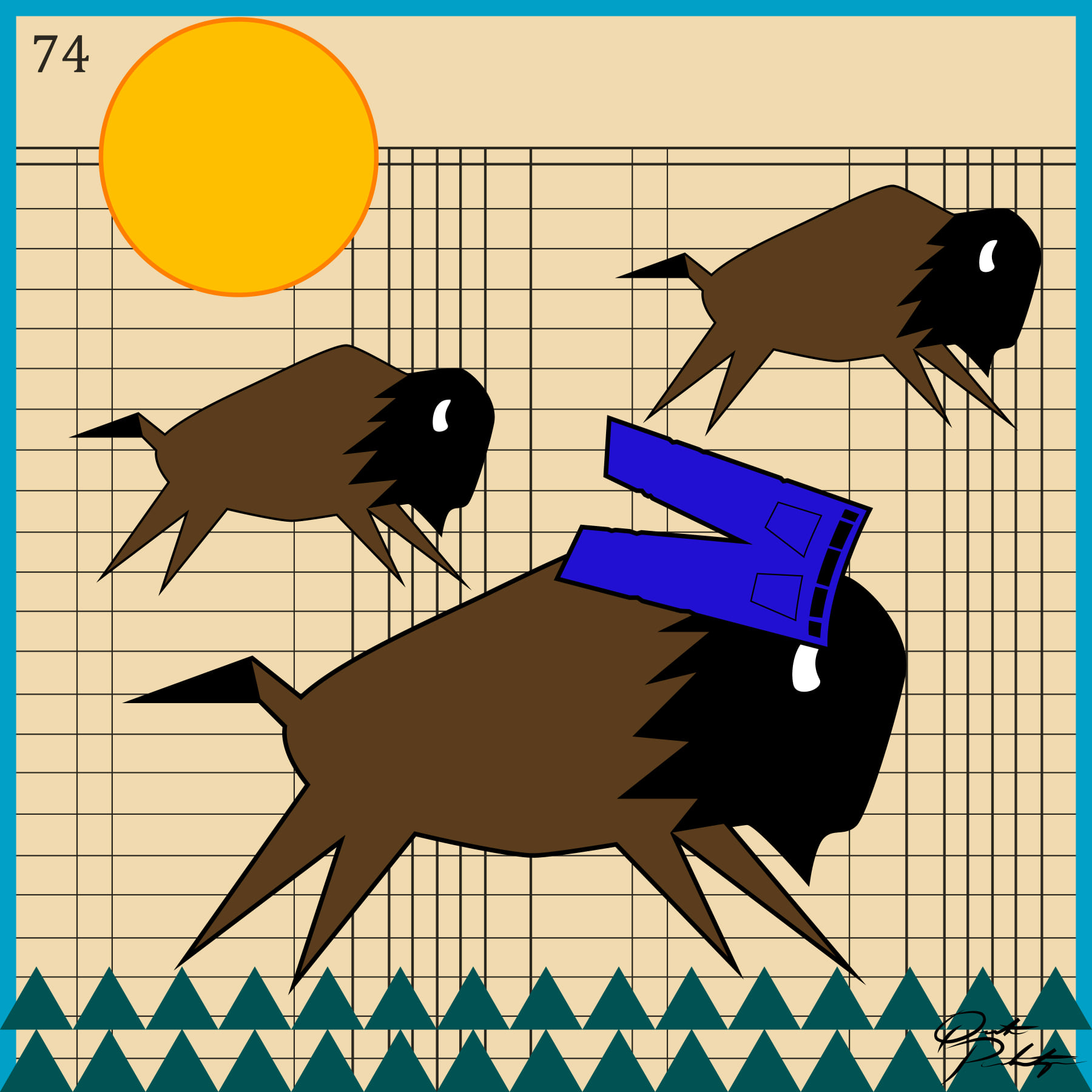 The statement: “After the video of the incident came out, I started seeing the memes and cartoons being shared on Facebook with the bison and the pants. I thought they were funny. I've always admired ledger art but never attempted it myself. I do a lot of work with Adobe Illustrator creating designs for t-shirts and I thought it would be fun to create my own (ledger -style) take on the bison/pants thing on Illustrator. I posted it on my Facebook not expecting a huge reaction and was surprised when people started sharing my image.” 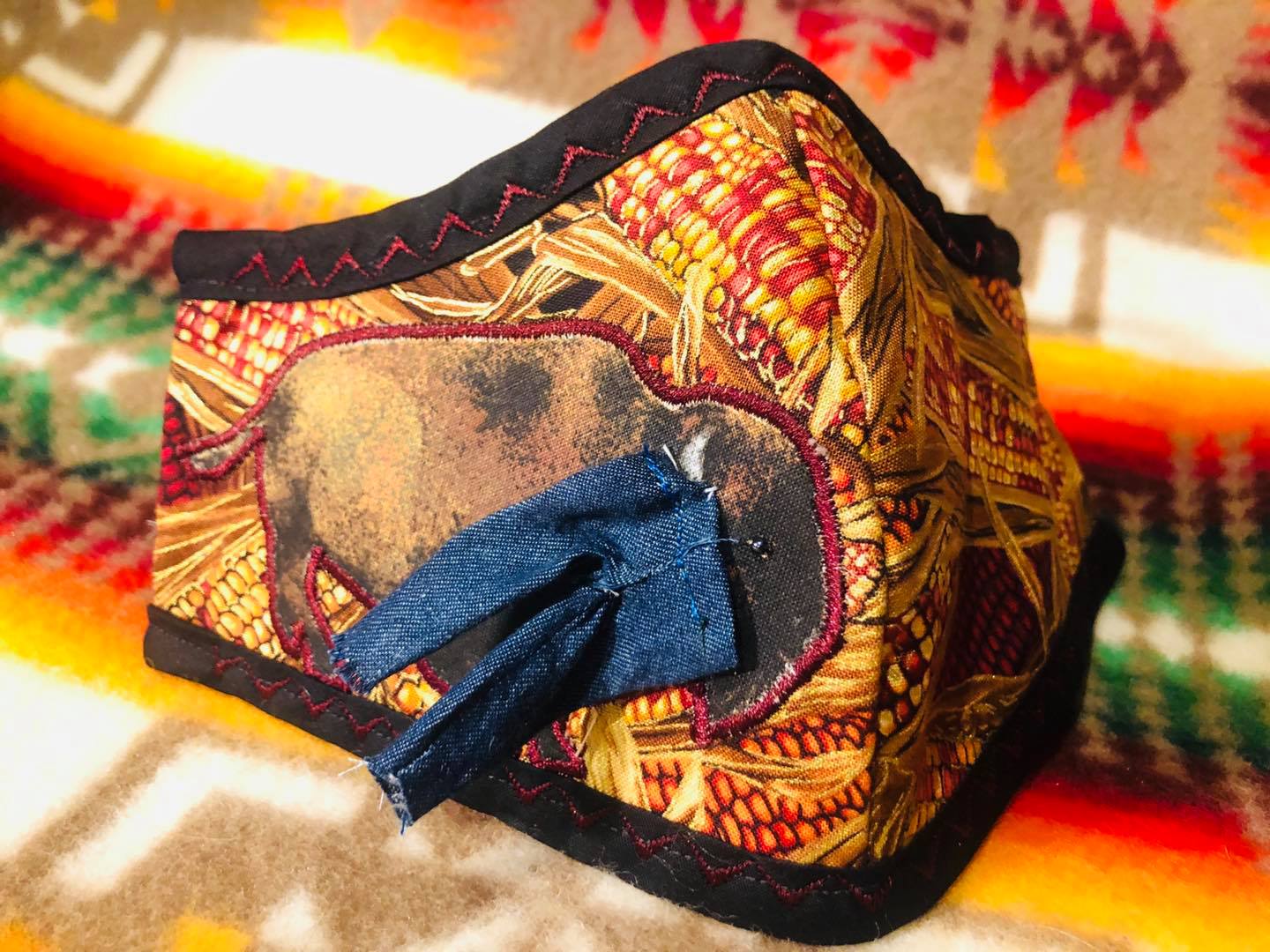 Ojibwe artist Michelle Reed's mask is a reminder: respect the health and safety of wildlife and those around you. (Michelle Reed)

Statement: “The bison was protecting the baby. I know where I’m from, we were always taught to respect wildlife. As Native people, we don’t take for granted the right of the animal to protect. We were taught if you see a baby bear, look out. There will be one protective mom there. And there are signs in the park for those who do not know such things. So to choose to ignore them shows a level of disregard for your own safety as well as that of the animal. It’s similar to the mask issue; Always being told what to do? Can’t pet the baby bison? Have to wear a mask? Yeah, for your protection...I loved doing my mask.  It’s so fun to be inspired by events. Plus, I have buffalo masks I make regularly so I just had to do up some tiny, tiny pants.” 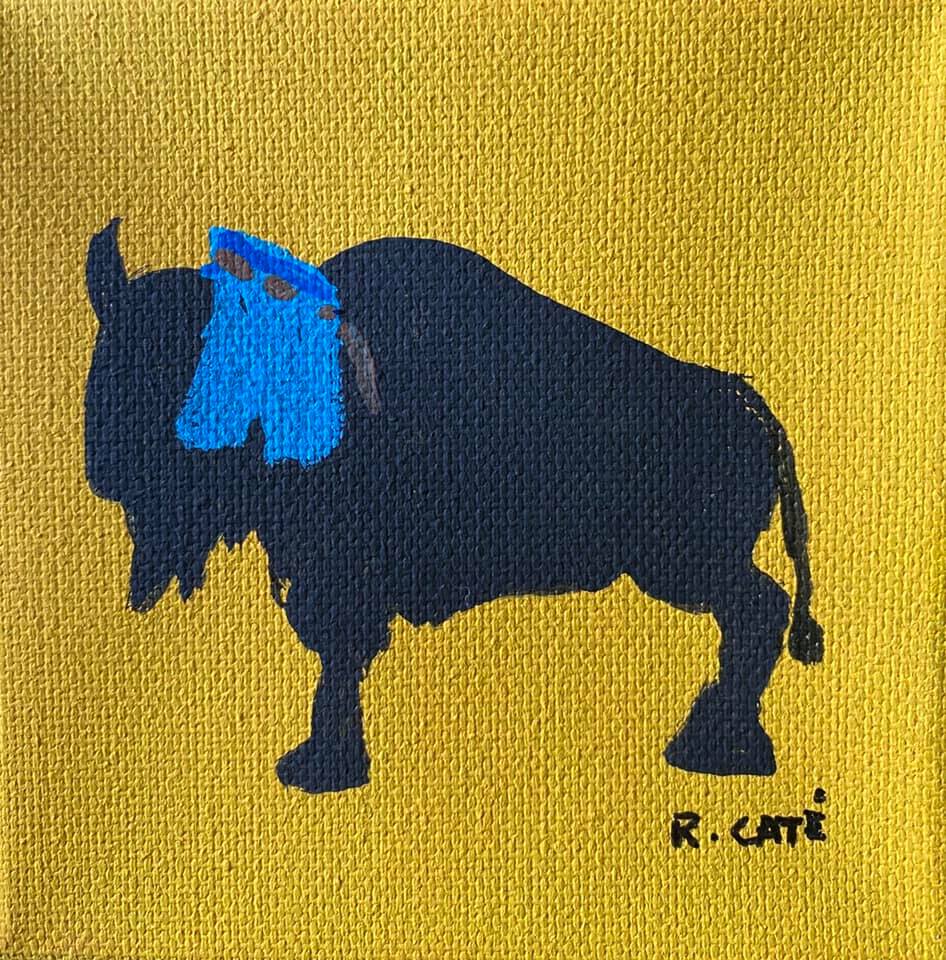 Cartoonist Ricardo Caté's painting of the now-iconic image of a bison with jeans hanging from its horn. (Ricardo Caté)

The statement: Capturing quirky current events through a Native American lens is Caté’s job. Two other women who got dangerously close to bison have also been injured this year at Yellowstone, and the responses Caté whipped up were fueled by recent reports “that so many non-Natives were being ‘attacked’ by animals lately. But as it turns out they were impeding on our four-legged relatives’ territory.” 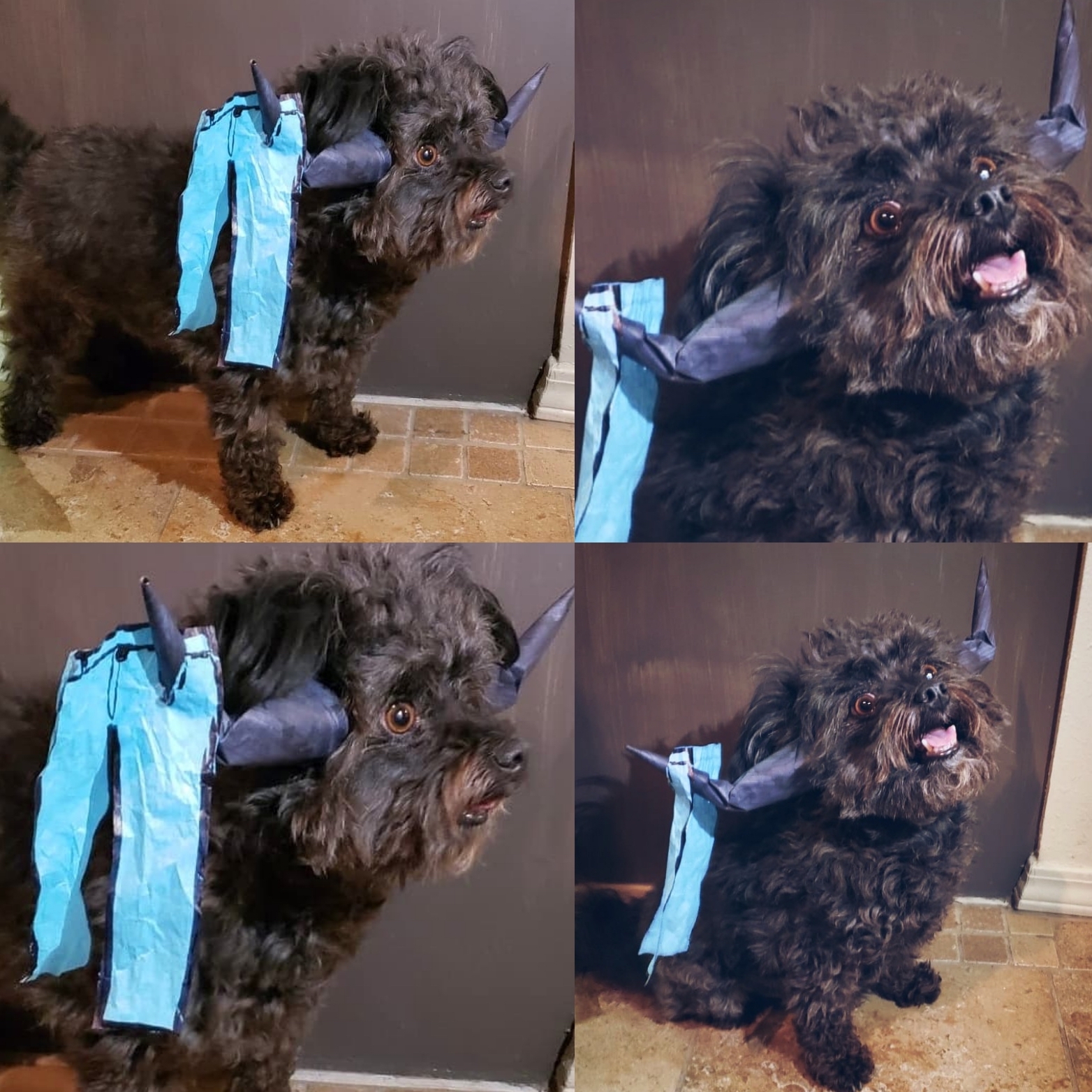 The statement: “‘Buffalo Takes Pants’ speaks to us getting our space back. That bison did something I think we all wish we could do as Indigenous people;toss non-Natives out of our space when they start disrespecting us. That's why I think we see that bison as a hero in Native America. Itchi's costume pays homage to that, ‘cause, you know, imitation is the sincerest form of flattery; a real hats off, or pants off, to a modern day hero.”

Author: Tamara IkenbergEmail: This email address is being protected from spambots. You need JavaScript enabled to view it.
Tamara Ikenberg is a contributing writer to Native News Online. She covers tribes throughout the southwest as well as Native arts, culture and entertainment. She can be reached at [email protected]online.net.
Breaking News