After a Successful Championship, Hoop Dancers Performed at the Santa Fe Indian Market 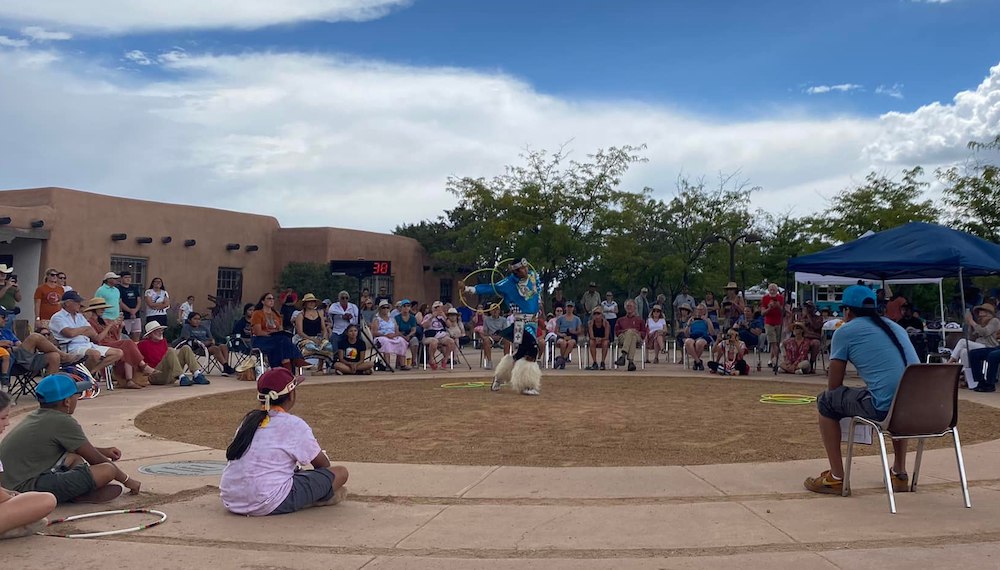 As Native youth performed traditional hoop dance in a competition in Santa Fe, New Mexico, the movement of the hoops created meaningful designs born of nature.

Hoop dancers weave their hoops into many different designs found in nature, Steve LaRance, the co-chair of the foundation that co-hosted the competition, told Native News Online. These include the eagle, which represents the winged animals of the sky; a butterfly design which represents the insects; a flower design, which represents plants and agriculture, and the ladder of life, he said.

“So while they’re learning this dance, which is a physical dance and it keeps them active and healthy, they're also learning our Native American philosophy of being stewards of the earth and protecting Mother Earth,” said LaRance (Hopi Tribe).

On August 6 and 7, Native youth performed at the First Annual Nakotah LaRance Youth Hoop Dance Championship, which was hosted by the Lightning Boy Foundation and the Museum of Indian Arts & Culture in Santa Fe. LaRance said the championship had 38 registered dancers.

“The results of the whole event were just so successful, as far as giving our dancers confidence and pride and self-esteem,” LaRance said. “They were able to perform in public in front of a large audience to applause, and to appreciation, and support from the community of Santa Fe.”

LaRance spoke with Native News Online while making a piece of jewelry for the Santa Fe Indian Market, where hoop dancers with the foundation were preparing to perform from 2 to 3 p.m. on Saturday at Santa Fe Plaza. The market is celebrating its 100th anniversary this year.

LaRance’s son Nakotah, a world championship-winning hoop dancer, helped inspire and start the nonprofit foundation, which started holding classes in 2016. The foundation was created in the memory of Valentino Tzigiwhaeno "Lightning" Rivera, an eight year-old hoop dancer from Pojoaque Pueblo who passed away in 2016.

Nakotah LaRance passed away a little over two years ago, but his father said hoop dancing opens doors for other dancers as it did for his son.

“A lot of our dancers have been able to travel extensively and perform at events (and) things of that nature,” LaRance said. “That gives them an opportunity to network with people that they would not normally meet. Basically the hoop dance empowers our young. And it gives them a sense of pride in their culture.”

The Lightning Boy Foundation, which received major support from the First Peoples Fund, provides traditional hoop dance instruction to Indigenous youth aged two and up, and received the 2021 Mayor’s Award for Excellence in the Arts. The elder LaRance said they also engage in national outreach and have had workshops and cultural training, mainly around hoop dance.

The foundation also provided prizes for top hoop dancers at the Youth Hoop Championship. The top three dancers in each of three divisions would receive prize money, with the best dancer in the collegiate division winning $1000.

LaRance said that the community is requesting the championship to continue, and it will return next year on August 5 and 6, 2023, at the Museum of Indian Culture in Santa Fe. As students become more skilled, the foundation plans to include them in public and private performances, LaRance said.

“They learn the designs, and as they’re performing, they can incorporate those designs into their performance,” LaRance said. “And part of it is being creative, so some of them come up with their own creative designs after they’ve mastered the basics.”