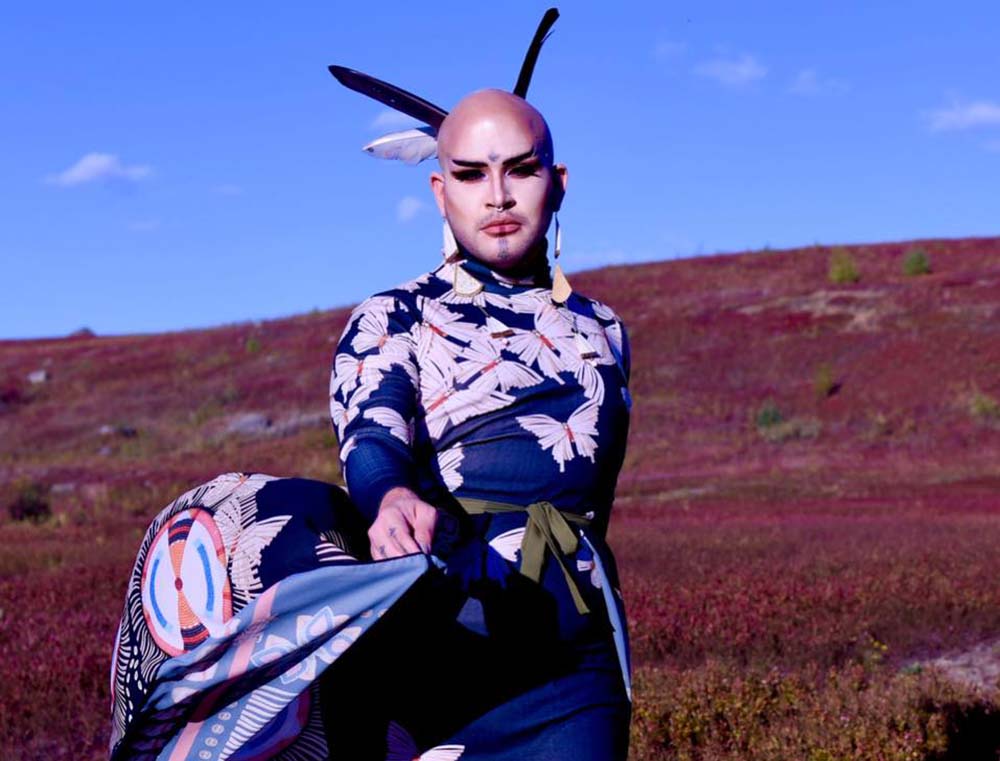 A fresh taste of Taos straight from the domed horno oven, the sleek, unique style of a notorious Native TikTok superstar, and a runway ruled by the fiercest of fashion show emcees are all standing by to stimulate your senses this weekend and next week in Indian Country.

Native News Online has curated a menu of irresistible events to satisfy your Indigenous fun and culture cravings.

Geo Neptune, a Two-Spirit Passamaquoddy basketmaker, model, educator, drag queen and politician, is a force of nature to be reckoned with in the worlds of style and social justice.

The Maine-based mover and shaker and Dartmouth alum will take on the role of fierce virtual fashion show MC this Friday at the 2020 Indigenous Fashion and Design Showcase co-hosted by the Dartmouth College Native American Program and Dartmouth’s Hood Museum.

Masks designed by Indigenous students and community members, which reflect their backgrounds and culture, will also be presented and judged at the fashion show.

Tongva activist and artist Weshoyot Alvitre will demonstrate her drawing skills during a live stream on Marvel Comics' YouTube channel on Tuesday, Nov. 10. Alvitre is part of a team of Indigenous artists and writers behind Marvel's new "Indigenous Voices" series. (Marvel Comics)Watch a master cartoonist at work when Tongva artist and activist Weshoyot Alvitre draws cool characters and interacts with fans during a livestream on Marvel’s YouTube channel.

Alvitre is part of a team of Indigenous artists and writers behind the comic icon’s new “Marvel’s Voices: Indigenous Voices #1” series, an empowering effort to culturally diversify the Marvel Universe and dispose of previous degrading comic stereotypes.

Alvitre, who has two decades of experience drawing for publishing companies, spoke about the importance of Indigenous creatives telling stories from their perspective in a recent Native News Online story.

“It’s more impactful when Natives speak for themselves,” Alvitre said. “People are in different states of decolonization, and we can’t hold it against them for how they handle things… (Indigenous people) already survived an apocalypse. We can rebuild things that were lost and revive things that are sleeping.”

One of the most authentic and prolific personalities in the Indigenous art and social justice worlds, Alvitre is a point-person for issues in the Tongva community, and is always juggling multiple intriguing projects, often in collaboration with other Native artists.

Her beautiful, evocative images of Indigenous people illustrate the world of the award-winning educational video game “When Rivers Were Trails,” which is an Indigenous-focused reboot of the classic game “Oregon Trail.”

She constantly experiments with Indigenous lifeways and artforms and also creates bold, thought-provoking propaganda supporting Indigenous causes, from Standing Rock to the current struggle of Southern California’s Kumeyaay people against the construction of a border wall on their sacred sites.

And when she can find the time, Alvitre works on the personal project that towers over everything else: “Our Lady of Sorrows,” a graphic novel about Toypurina, the Tongva warrior and medicine woman who led a revolt against Mission St. Gabriel in 1785.

“She is such an inspiration to me because even though our culture nearly vanished, her story managed to continue down through oral history for over 200 years,” Alvitre said.  “She also was pregnant during the revolt and the revolt was a non-violent act, on her behalf. There is a tremendous sense of the power we all have to change things, if we truly want to, and in ways which don't require western masculine forms of power involving weapons or brute force or violence.”

So you don’t have a traditional domed Pueblo oven in your yard?

Wake up and virtually smell the pueblo bread straight from the earthen Ah-cutoo, a.k.a. horno oven with a class led by Romero, an educator and storyteller from the Big Pine Paiute and Taos Pueblo tribes. 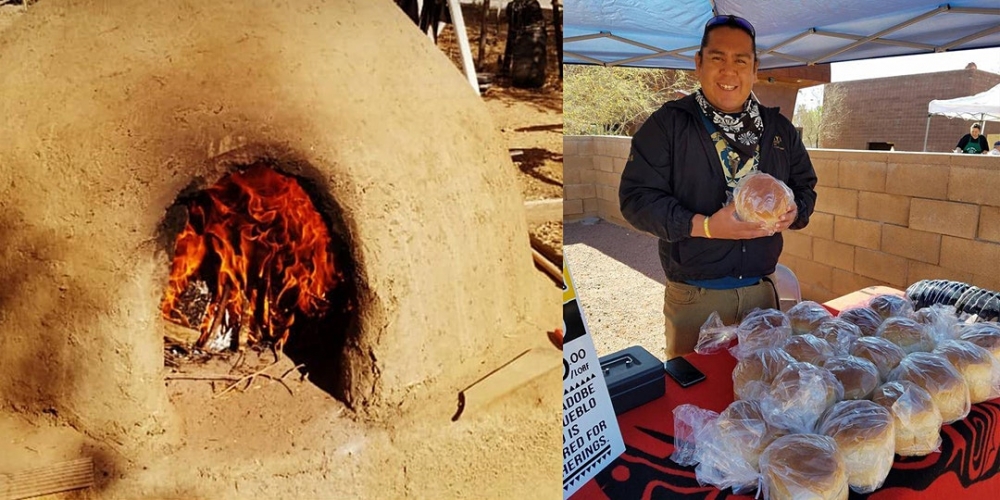 Romero, founder of the AkaMya Culture Group based in Big Pine, Cali., will guide students through the process of baking Pueblo bread, also known as Tuah-Tahi in the Tahi language of the Taos Pueblo. Romero will bake the goods in his Ah-cutoo, also known as a horno, and also educate his audience on the traditional language names of Taos people and the stories of the histories of bread making. 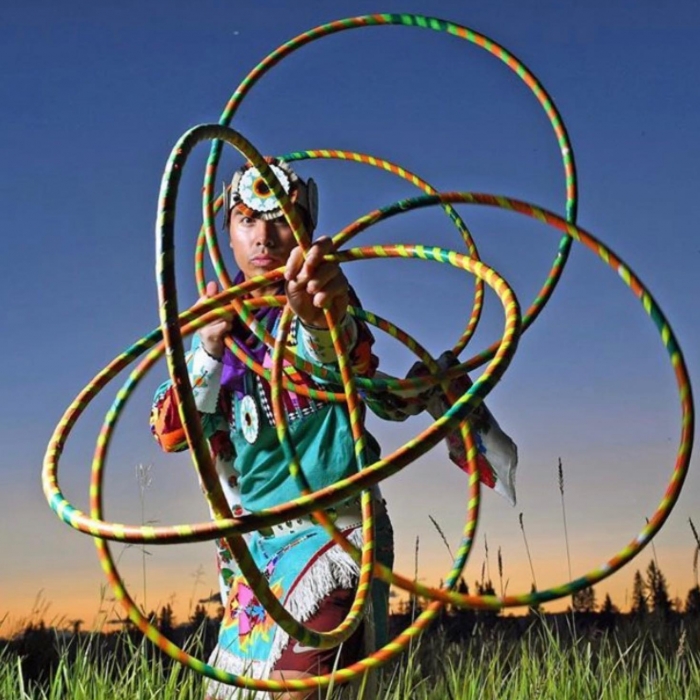 With nearly 2 million TikTok followers, the cool, charismatic hand drummer, flutist and powwow dancer known as Notorious Cree, is the Indigenous influencer of the moment.

Whether he’s fancy dancing in full regalia with special effects to “Thriller” for a Halloween TikTok treat, or striking silly poses while “new boot goofin’” in a fresh pair of mocs, he’s an infinitely talented and watchable Native social media role model.

On Wednesday, Nov. 11, you can catch up with Notorious Cree, whose real name is James Jones, when he makes a presentation at a Native American Heritage Month event sponsored by Wisconsin’s Waukesha County Technical College’s Multicultural Resource Center.

According to Multicultural Resource Center Coordinator Rolando De León, Jones “will be doing a little of everything: a men’s powwow fancy dance, playing the flute and hand drum, and a full hoop dance performance, as well as talking about traditions and living a healthy life through culture.”

Jane Osti: Our Pottery, Our People 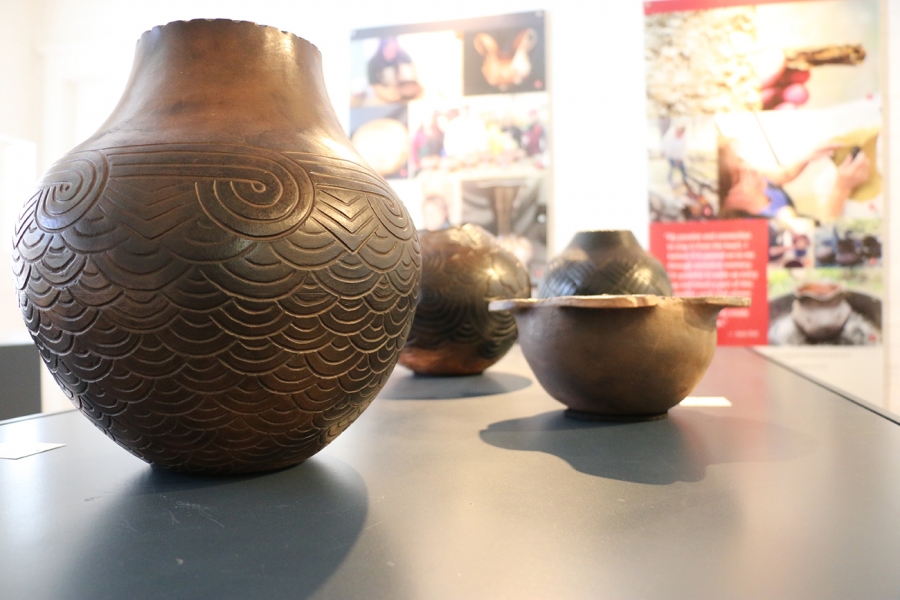 The exhibition "Jane Osti: Our Pottery, Our People," featuring the work of Cherokee National Treasure Jane Osti, runs through Dec. 26, 2020 at the Saline Courthouse Museum in Rose, Oklahoma. (Cherokee Nation)

The exhibition “Jane Osti: Our Pottery, Our People,” which opened earlier this week, shines the spotlight on the work of living Cherokee legend Osti, who received the tribe’s National Treasure distinction in 2005.

A selection of items will be available for purchase at the show, which also closely examines the history and revitalization of Cherokee pottery.

“Jane’s career essentially bridges all eras of Cherokee pottery, as it’s inspired by the traditions practiced for centuries by our ancestors who formed clay into vessels long before our first European contact,” Krystan Moser, manager of cultural collections and exhibits for Cherokee Nation, said in a press release.  “She learned her craft directly from the woman who brought this once-lost artform back to the Cherokee Nation, and she has worked passionately to share her knowledge and experience with others to further preserve and promote Cherokee pottery for generations to come.”