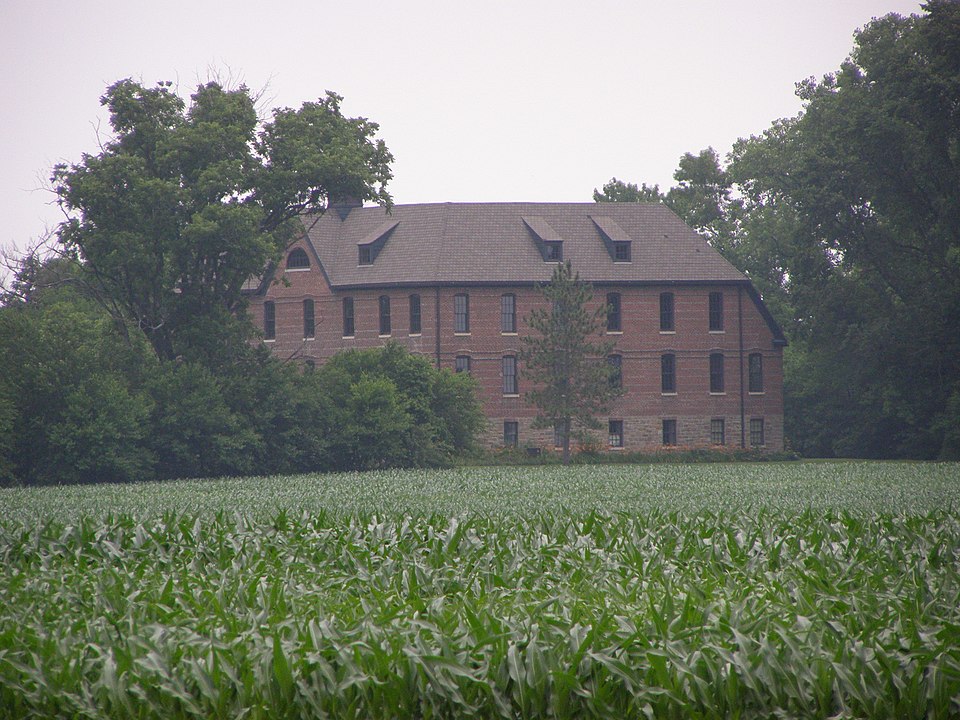 The Indiana Department of Natural Resources is heading up its own project to locate records and find the names and tribal identities of the Native youth who died while at one of the state's two Indian boarding schools, White's Indiana Manual Labor Institute and St. Joseph Indian Normal School.

Jeannie Regan-Dinius, director of special initiatives in the department’s Division of Historic Preservation and Archaeology, said she suggested the project to her boss last June after suspecting that the two 19th-century schools wouldn’t fall into the federal Department of the Interior’s Indian boarding-school initiative.

“We recognized pretty early that the Indiana schools would not fall into that study, because the schools were religious-based,” Regan-Dinius told Native News Online. The initiative is a year-long investigation into U.S. Indian boarding schools, with a report due out this month, aimed at identifying each federally run boarding school in the country and the location of unmarked burial sites associated with them. A spokesperson for the Interior Department didn’t comment on whether or not the federal initiative will include religious-run institutions, which received funding from the federal government and account for almost half of the at least 400 known boarding schools.

“We knew that there was a cemetery at both schools,” Regan-Dinius said. “The goal is to find out how many burials there actually are, and (to try) to identify — if we can — who might be buried there, and then work with the tribal representatives and determine what's best. ”

“For me, it's completing our history,”  she added. “It's a way for us to take care of some things that happened in the past that shouldn't have happened.”

Since October, Regan-Dinius has focused her attention on searching through archival material on White's Indiana Manual Labor Institute, a school in Wabash run by Quakers. It began admitting students in 1862 and was open for 34 years.

Through records housed at Earlham College, a Quaker college in Richmond, about 100 miles southeast of Wabash, Regan-Dinius was able to count 310 students from 12 different tribes who attended White's Indiana Manual Labor Institute.

She’s traveling to the site, now a Catholic-run high school, on Apr. 25 to photograph its current headstones and see how they match up with the 22 deaths she counted in the school’s records. According to her research, the school’s cemetery only has nine tombstones.

The Department of Natural Resources will formally notify the 12 tribes whose students were taken to White's Indiana Manual Labor about the project by mail in the coming weeks. Most were Sioux from North and South Dakota.

“We were waiting to contact the tribes until we had the list of the students in their affiliation,” Regan-Dinius said. “I finished that last Friday [Apr. 11], and so I have a letter that… is being approved to go out to the tribes. We're hoping [in the] next couple of weeks to have that letter in the hands of the tribes.”

She said that a local archeology firm, Stantec, has agreed to conduct ground-penetrating radar on the site for free if the tribes consent.

But after WTHR-TV, an NBC affiliate in Indianapolis, reported on the department’s work on April 4, three tribes with historic ties to Indiana reached out to Regan-Dinius with concerns.

Shawnee Nation of Oklahoma’s Chief Ben Barnes told Native News Online that the news article made it seem as though the department was immediately going to begin ground-penetrating radar at the White's Indiana Manual Labor site without any tribal consultation.

“This was alarming to me, as no one had talked to tribal nations,” he said. “Why are we putting the cart before the horse, when we need to talk to the tribes who had children attending these places? Because what happens if you find one? If it’s private ownership, will we be allowed to exhume our children? What if we want them to stay there? Is that even a tenable solution if the land is owned by someone else? There's lots of things to talk through. We need to find out also: Are these the only two [Indian boarding schools] in Indiana? Were there others?”

Barnes said it’s unfortunate that the Department of Natural Resources didn’t involve tribal nations sooner in its research process, and that they should have immediately initiated conversations once the WTHR story broke. He added that the department hasn’t quite understood how many tribal nations might require engagement: The Shawnee Tribe has records from Kansas that show Shawnee children were sent to Indiana for boarding school.

“Is this the one that our kids were sent to?” Barnes asked.

“Frankly, Indiana doesn’t know what questions to ask,” he said. “Let’s unpack that for a minute: In-di-an-a,” Barnes said. “It's clearly named after Indian people, and yet they act like they don’t know what Indian people are. It seems a little paternalistic that they're going to get all the answers and then sit us down and tell us about it.”

The Pokagon Band of Potawatomi Indians, in present-day Michigan, also contacted the Department of Natural Resources when they heard the news earlier this month. Tribal Chairwoman Rebecca Richards wrote to Native News Online that, while they appreciate the department’s efforts to investigate Indian boarding schools, they feel strongly that all parties involved in exploring sensitive historical sites “should proactively consult with Native American Tribes in their area before embarking on such efforts.”

Regan-Dinius told Native News Online that no work will take place on the property without tribal consultation.

“For our part, I didn't even know which tribes to consult with until we did the list,” she said. “All we've done is the archival research. Our intent was not to leave anybody out, but to bring in the correct tribes when we got that information.”

Regan-Dinius said records for St.Joseph's Indian Normal School, a Catholic-run school in Rensselaer, have been harder to find. The Jasper County Historical Society is helping search for any archival material about the all-boys boarding school. One of the buildings was converted to a residence hall for the now largely defunct St. Joseph’s College.

“So that's next,” she said, “but it will require more searching and digging around in archives.” 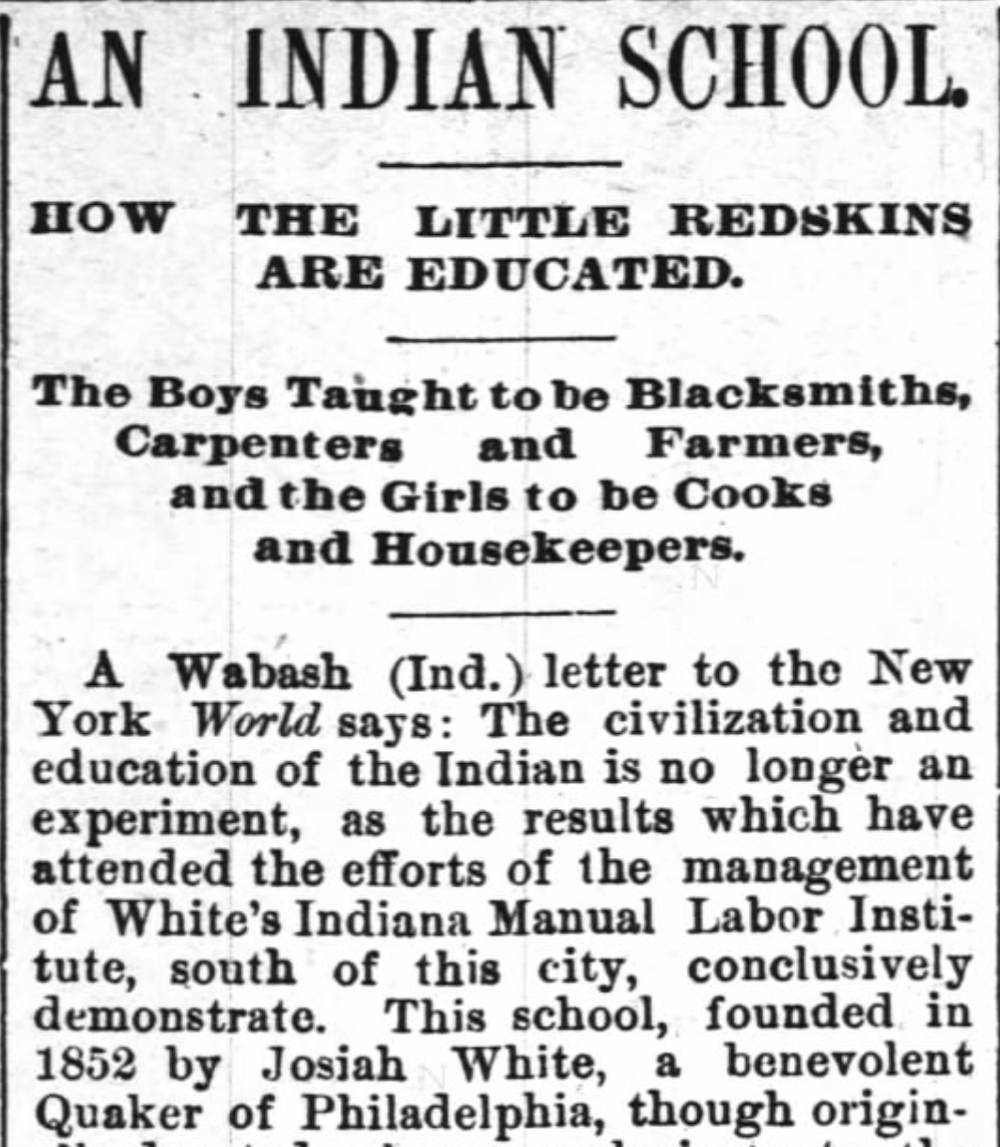 Screenshot of a clip from The Weekly Record Beaufort, North Carolina 11 May 1888, Fri • Page 2. Read the full story at https://www.newspapers.com/clip/4527432/an-indian-school-whites-indiana/