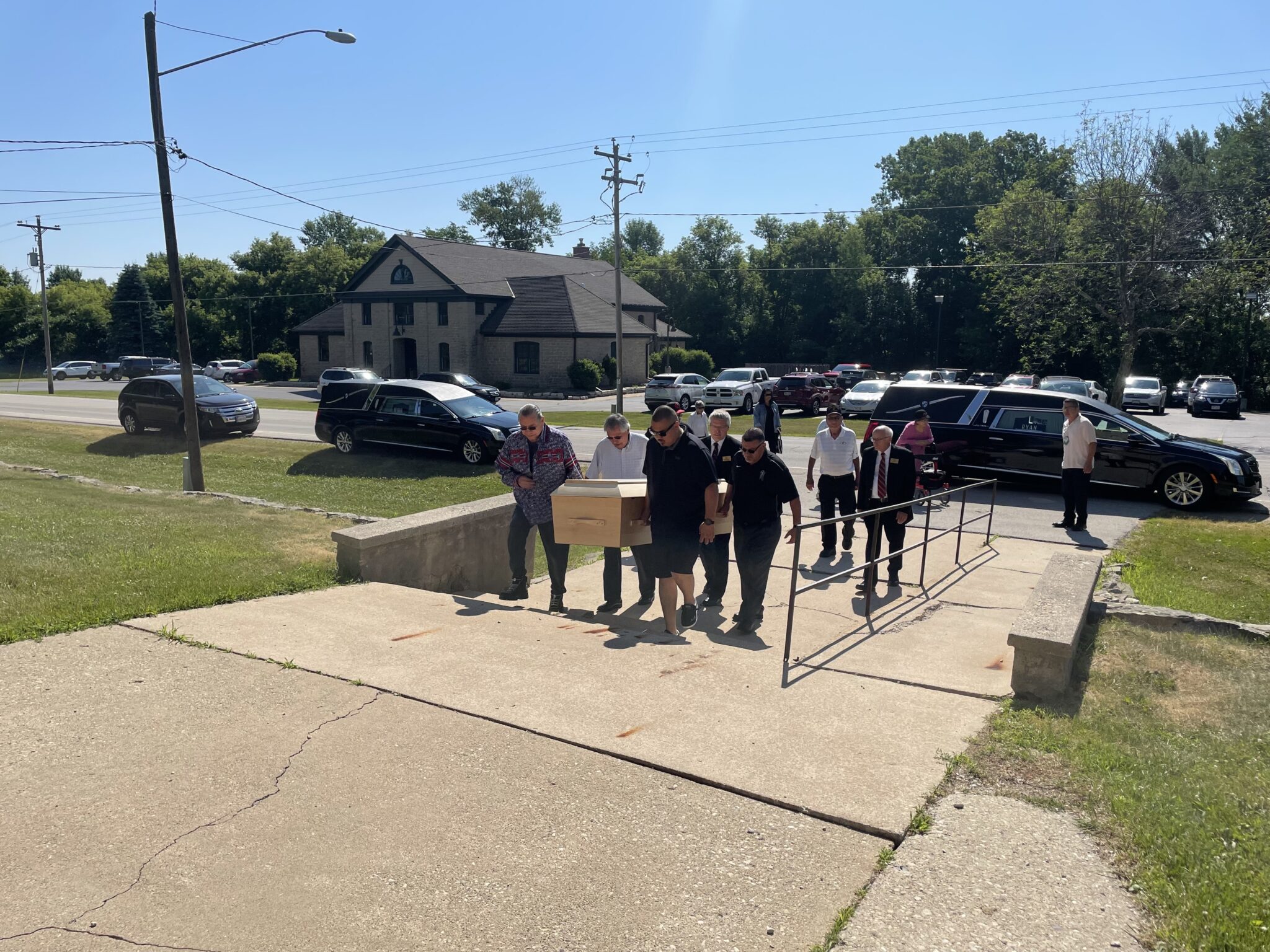 After a memorial service on June 27, the families of Paul Wheelock and Frank Green buried the remains of the two Oneida children in the church’s cemetery. Over 120 years ago, Wheelock and Green were buried at Carlisle Indian School in Pennsylvania. 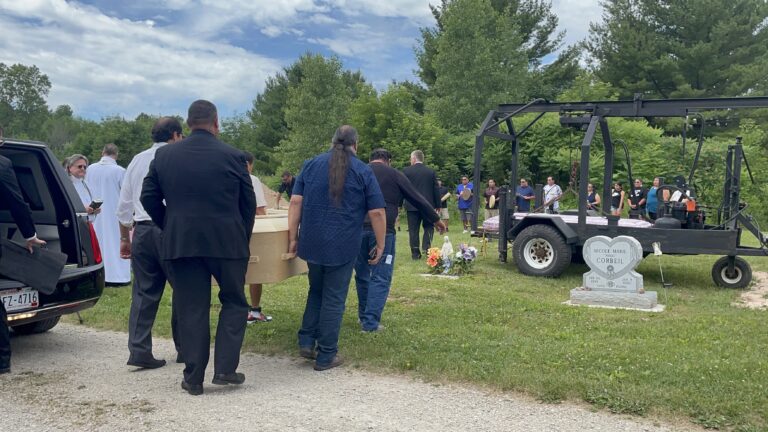 Pallbearers approach the grave sites of Frank Green and Paul Wheelock. Drummers and singers watch from close to the treeline. | Photo by Andrew KennardAfter a memorial service, the congregation gathered by two open graves. Drumming and singing rang out from a group of mourners standing deeper in the cemetery. After the caskets were lowered into the ground, mourners came forward with offerings of tobacco or earth for the graves.

“…I just wondered why I wasn’t told about him,” Doxtator said.

Carlisle was the first of a system of at least 408 government-run schools that abused and aimed to eliminate the languages and cultures of Native American students, who often lived in inhumane conditions. Carlisle’s founder, Richard Henry Pratt, advocated the idea that the U.S. should “kill the Indian in him, and save the man” in an 1892 speech.

An Interior department report released in May estimates that the “approximate number of Indian children who died at Federal Indian boarding schools to be in the thousands or tens of thousands,” and that many were buried in unmarked or poorly maintained graves far away from their communities and families. A bill introduced in Congress later that month aims to create a Truth and Healing Commission that would investigate the impacts and ongoing effects of the boarding school system.

“And when I think about these children, we all know the stories of the boarding schools,” Oneida councilman Kirby Metoxen said to the mourners assembled in Hobart, speaking on behalf of one of the families. “And I just can’t imagine being taken so far away from home and getting sick and knowing that you’re getting ready to go to that other side alone.”

‘I see our last names’ 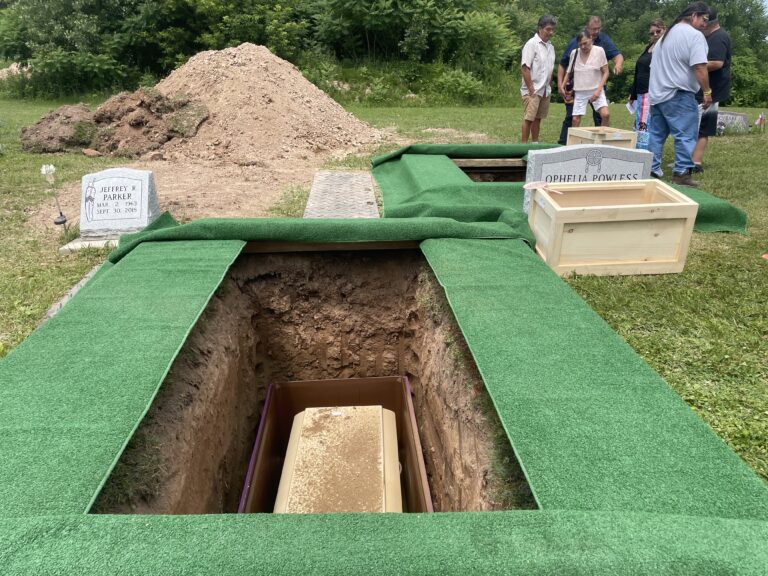 Frank Green and Paul Wheelock were laid to rest in the church’s cemetery, near the graves of Ophelia Powless, David Doxtater and Jeffrey Parker.Wheelock and Green were buried next to Ophelia Powless, whose remains were reclaimed from Carlisle in 2019 along with the remains of two other teenage Oneida students.

“We still have two up there,” Metoxen said. “Jemima John and Melissa Metoxen are still out there, and those families still have to decide what they want to do with the remains of those children.”

In a statement on Thursday, the Office of Army Cemeteries said that it has finalized its fifth disinterment project in returning seven Native American or Alaska Native children to their families, and that many have already been buried on their native lands. When an eighth grave was disinterred, the Army found remains that did not match the child that records said had been buried there.

“The combined Army team was privileged to support families and return seven more children this summer, totaling 28 over the past six years,” Renea Yates, director of the Office of Army Cemeteries, said in the statement. “We are committed to caring for the graves of children who remain buried at the Carlisle Barracks Post Cemetery and will continue to support the disinterment of those requested to be returned.”

Over ten thousand children from about 50 tribes across the nation attended Carlisle, according to the Army; about 190 children were buried at the school, according to Dickinson College, which houses the Carlisle Indian School Digital Research Center.

Metoxen said that when he visited Carlisle, he was expecting to see the graves of children from tribes other than his own.

“And as I’m walking through that cemetery, I see our last names,” Metoxen said. “Coulon. Powless. Green. Wheelock. John. And about the fourth or fifth headstone I came upon was a Melissa Metoxen. And I have a niece, Melissa Metoxen. It stopped me in my tracks. My thought immediately was, how come nobody came to get these kids?”

What happened to Frank Green and Paul Wheelock?

Paul Wheelock was ten months old when he died of a “severe cold,” according to a Carlisle school newspaper. During a brief sermon at the memorial service, the Rev. Rodger Patience said that Paul was the son of Dennison Wheelock, a band leader at Carlisle. Dennison, a former Carlisle student, had graduated from the school about ten years before his infant son’s death in 1900, the Carlisle Digital Research Center found.

Frank Green was a teenager when he died on June 25, 1898. He was killed by a train while running away from the school a week before he was set to go home, according to documents from the time gathered by the Carlisle Digital Research Center.

‘Welcoming that spirit back to this place called home’ 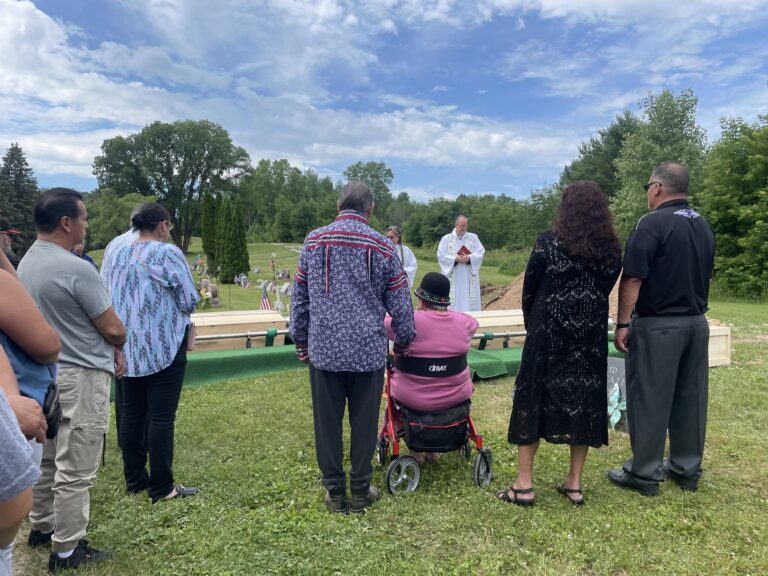 Mourners watched the caskets sink into the ground. | Photo by Andrew KennardThe Oneida Nation said in 2019 that 109 community members had been identified as descendants of tribal members who passed away while attending Carlisle over 100 years ago. During the memorial service, Metoxen said that his grandparents could speak the Oneida language, but his parents could not.

“So I heard my grandparents speaking the language, but none of my parents,” Metoxen told the mourners. “In that generation, I didn’t hear the language too much. Because of the boarding school era.”

Carlisle isn’t the only boarding school that Oneida students attended. Doxtator said that her parents and aunt attended the Tomah Indian School, and that students at a boarding school located in Oneida were not allowed to speak their native language. 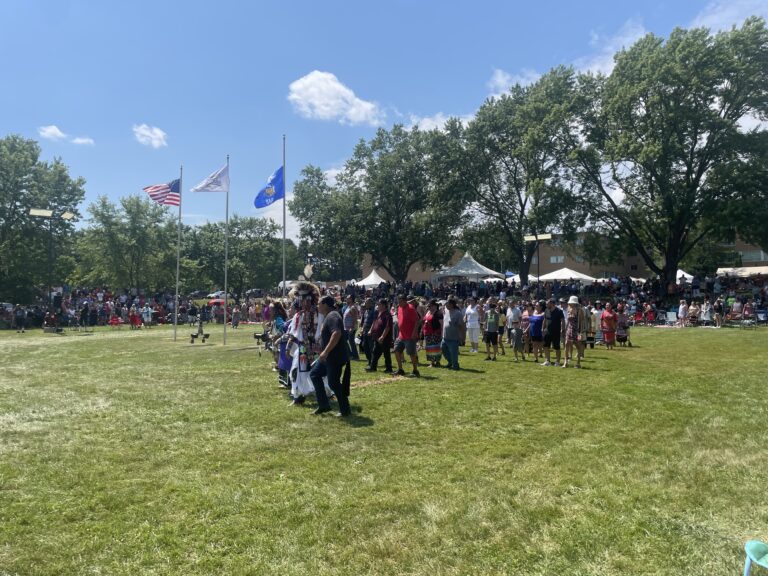 The Oneida Nation Pow Wow landed on the same weekend as the memorial service, and the community recognized the two children with an honor song. | Photo by Andrew Kennard“One day, [a relative] was in the dining room and everyone was visiting,” Doxtator said. “And he started speaking Oneida and they made him stand on a chair all during the meal.”

Later, “when they started the Oneida language program to teach Oneida to the Oneidas, he was one of the teachers,” she added.

The day before the memorial service, community members marched around the Oneida Nation’s powwow grounds for an honor song that recognized Green and Wheelock.

“But today is really a day of celebration,” the powwow’s announcer said before the dance began. “And when we start out this song, this is a song of welcoming that spirit back to this place called home. Our elders always had a story that wherever we travel, we’ll always come home.”

This story originally appeared in the Wisconsin Examiner.