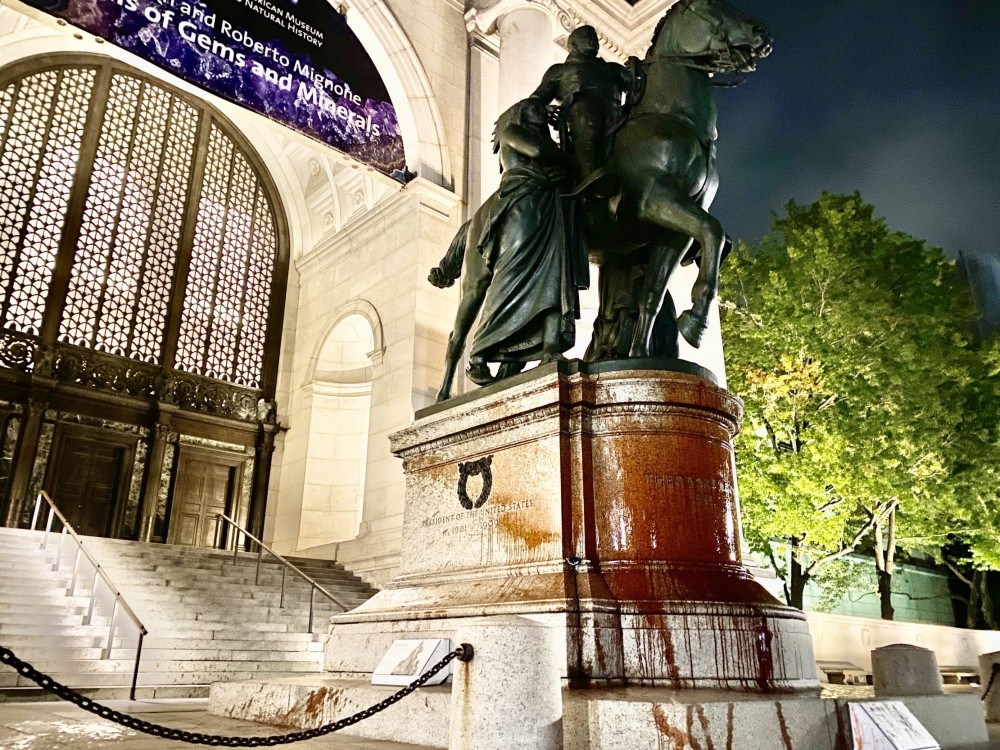 NEW YORK — More than 200 academics, artists and allies have signed onto a petition to stop New York City’s infamous Theodore Roosevelt statue from being relocated from a storage facility to the ancestral homeland of the Mandan, Hidatsa, and Arikara (MHA) people in North Dakota.

The city removed the statue from the entrance of the American Museum of Natural History in the middle of the night last month, more than a year after then-Mayor Bill de Blasio backed protestor’s rallying cries, stating that the “problematic” statue “explicitly depicts Black and Indigenous people as subjugated and racially inferior.”

Ross is a professor at New York University, and a founding member behind the activist group Decolonize This Place. Since 2016, his group has been putting pressure on the American Museum of Natural History and the city council to remove the Roosevelt statue, repatriate the museum’s collection of Indigneous human remains and sacred items, and rename Columbus Day as Indigenous People’s Day. “Then we learned about the relocation and the potential for just transferring the harm to a different location,” said Ross.

Prior to the statue’s removal, the museum announced its relocation plan: The Roosevelt statue would be transferred to the North Dakota-based Theodore Roosevelt Presidential Library Foundation on “long-term loan” for a “contextualized exhibit” set to open in 2026. Until then, it’s being kept in a storage facility in North Dakota, a spokesperson from the library told Native News Online.

Mendora, North Dakota— where the statue will eventually sit— is the gateway to Theodore Roosevelt National Park and the town where Roosevelt briefly moved to hunt bison. A large swath of the national park sits on land seized from the Mandan, Hidatsa, and Arikara (MHA) people in the 1851 Treaty of Fort Laramie.

Although the library said they consulted with the North Dakota Indian Commission executive office (a North Dakota governor-appointed board) on the relocation plan, they apparently didn’t consult with the five tribes, Native News Online reported in November.

North Dakota Governor Doug Burgum “expressed his concerns that MHA Nation was not previously contacted or informed about the matter,” according to MHA spokesperson Lovell Overlie.

Although Fox said he’s “not a big fan of Theodore Roosevelt,” given the former president’s disparaging remarks about Native Americans, today he told Native News Online that “Although we fully understand the concerns many have raised regarding the negative aspects of the statue, the MHA nation is not presently considering any petition or means of protest."

Roosevelt is remembered by Natives for his support of the land allotment system that favored conservation, but at the cost of displacing Indigneous people off their land—more than 230 million acres of it. He’s also known for his support of eugenics, and his public address in 1886 where he said: “I don’t go so far as to think that the only good Indians are the dead Indians, but I believe nine out of every 10 are. And I shouldn’t like to inquire too closely into the case of the tenth.”

The Presidential Library Foundation, in their November press release, agreed that the so-called Equestrian Statue “is problematic in its composition,” and said they will establish an advisory council composed of Indigneous and Black community members, historians, and scholars “to guide the recontextualization of the statue,” should they decide to display the statue. The Presidential Library Foundation declined Native News Online’s request to comment on the petition.

Native News Online’s prior reporting on the relocation plan led Ross and his cohort to connect with Chairman Fox, Ross said, and to begin a local petition in New York to stop the relocation.

“We decided… that we were going to do a New York campaign because that monument is property of New York State, so it’s a problem of New York State’s making,” Ross said. “So we feel that the problem should be disposed of in New York State. It shouldn't be sent elsewhere.”

The petition compares the Roosevelt statue to toxic material: “New Yorkers cannot simply dump their toxic cultural products in other communities.” It also suggests the monument’s bronze content be melted down for material, “or simply disposed of.”

Indigenous signatories make up a portion of the list, Ross said, most prominently noting Audra Simpson (Kahnawake Mohawk). Simpson is a professor of Anthropology at Columbia University in New York City.

Ross said that the ultimate goal of the petition is to gain enough traction to pressure New York’s City Hall, the Public Design Commission, and the American Museum of Natural History to reconsider the long-term loan agreement with the presidential library.

“The aim will be to pressure the city officials and the appointed representatives on these committees,” Ross said.

The American Museum of Natural History did not respond to Native News Online’s request for comment.