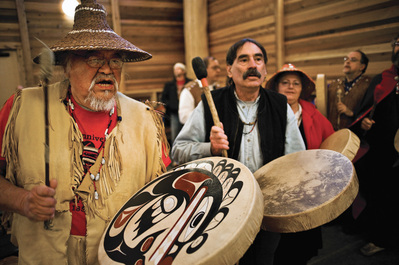 The Duwamish Tribe has lived in the Seattle area since time immemorial. Though the tribe signed the Treaty of Point Elliott in 1855 creating a government-to-government relationship with the U.S., it is still not federally recognized. This week, the Duwamish Tribe plans to file a lawsuit against the U.S. federal government to defend its tribal sovereignty.

“From 1859, when the Treaty of Point Elliott was ratified, until at least 2001, Congress and other federal authorities have unambiguously recognized the Duwamish Tribe,” the Tribe wrote in a media advisory Tuesday. “Yet, today, the U.S. Department of Interior refuses to officially recognize the Duwamish Tribe in violation of the U.S. Constitution and other federal laws.”

The lawsuit will be filed in the U.S. District Court for the Western District of Washington. After filing the complaint, the legal team representing the tribe will summarize the arguments in support of federal recognition at an event at the Duwamish Longhouse and Cultural Center in Seattle at 11:30 a.m. Wednesday. Speakers at the event include Duwamish Tribal Chairwoman Cecile Hansen, Duwamish Tribal Council members and the tribe’s attorneys, among others. Participants can also join the event virtually on Zoom by registering here.

“In the absence of federal recognition, funding, and human services, Duwamish Tribal Services has struggled to provide numerous social, educational, health, and cultural programs,” the tribe says on their website. The tribe, which has over 600 enrolled members, adds that “many more” Duwamish people have chosen not to enroll, instead enrolling in federally recognized tribes that provide health and other human services.