Birchbark Canoe on Shores of Lake Michigan at Northwestern University 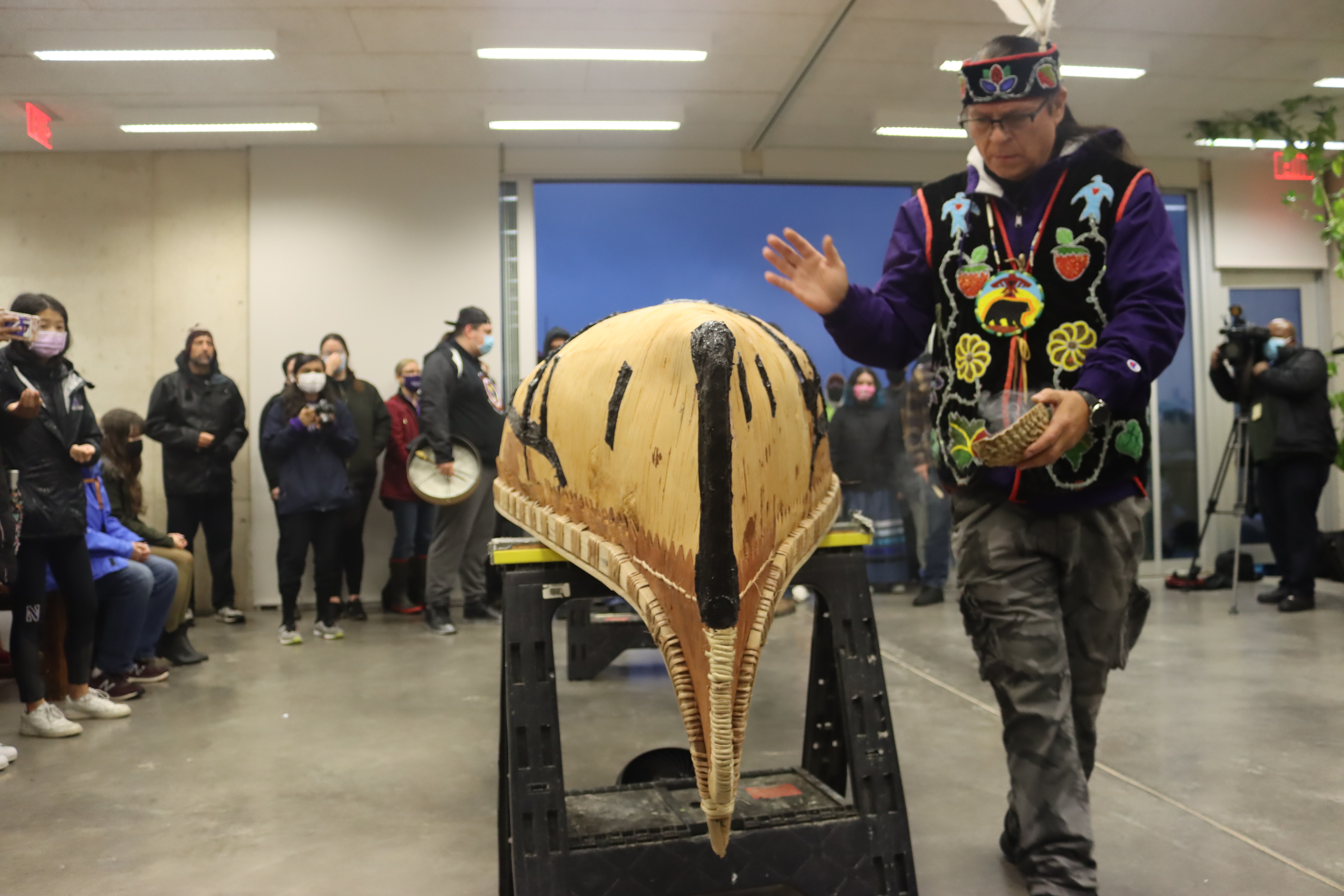 Evanston, Illinois—This morning at sunrise, a birchbark canoe was launched on the shores of Lake Michigan at Northwestern University—a first in hundreds of years. The canoe was built by Wayne Valliere, a member of the Lac du Flambeau Band of Lake Superior Chippewa.

“The launching of this canoe is like coming home today,” said Wayne Valliere during the ceremony. “The spirits that live in this place never forgot the Anishinaabeg; they never forgot who we are and they are happy today.”

Valliere is one of the few remaining traditional birchbark canoe makers among the Anishinabe people, commonly known as the Three Fires Confederacy of the Ojibwe, Potawatomi and the Odawa people. Valliere is a 2020 National Endowment for the Arts Heritage Fellow and also practices other traditions such as beading, quillwork and drum making.

The lessons he shares are not just about canoes, but our place in the world.

“Our Grandmother—the Earth—isn’t doing too well. The water throughout this country is contaminated and without clean water we have no life,” said Valliere.

Valliere recollects the history of the Anishinabeg people, and shared with the nearly 100 people attending the launching that it has been nearly 400 years since a canoe has been launched on the southern shores of Lake Michigan. “It’s been put in other places, north of here, but not in this place,” said Valliere.

The Center for Native American and Indigenous Research (CNAIR) at Northwestern University hosted Wayne Valliere as an artist-in-residence, where he taught students and others the craft and traditions of canoe making over the last three weeks. CNAIR is Northwestern’s primary institutional space dedicated to advancing scholarship, teaching, learning and artistic or cultural practices related to Native American and Indigenous communities, priorities, histories and lifeways.

The canoe will be housed somewhere on campus, said Silas. “It is our hope that this canoe is more than just an object to the community and it inspires teaching and learning from an Indigenous perspective,” she said.

Earlier this summer, a group of Northwestern faculty and students traveled to the Lac du Flambeau Reservation in northern Wisconsin to help gather materials used to create the canoe: cedar for the ribs, spruce roots for the stitching, pine pitch to seal the seams and birchbark. The Anishinaabeg used birchbark to build homes, cradles, caskets and much more.

“After 500 years of attempting to assimilate the Anishinabe people, it still hasn’t happened yet,” said Valliere.