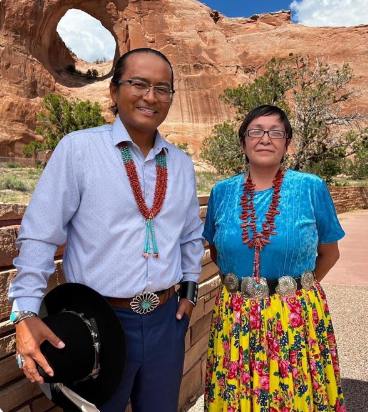 Voters of the country’s largest Indian reservation, Navajo Nation, have elected Buu Nygren to serve as the Nation’s President for the next four years. Nygren challenged incumbent President Jonathan Nez.

Montoya will be the first woman to serve as the Nation’s Vice President.

Nygren, 35, grew up in Red Mesa, Arizona. He has never before held political office, though he ran for Vice President alongside former Navajo Nation President Joe Shirley four years ago and lost to Nez. Nygren and Montoya campaigned on the need for economic and educational change to support business development, sustainable jobs, and strengthening the workforce in Navajo Nation.

Nez, 47, previously served as a Council Delegate and a Board of Supervisor member. He selected Air Force veteran Chad Abeyta, 33, as his running mate. Abeyta holds a master’s of law in Indigenous people’s law and policy from the University of Arizona in Tucson.

Nez served as president during the COVID-19 pandemic, which posed the largest public health threat to Navajo Nation citizens in modern times.

Since the Navajo Nation began tracking COVID-19 cases on March 16, 2020, as of Nov. 3, 2022, there have been 76,651 positive cases and 1,936 deaths. At one point during the pandemic, the Nation was the epicenter of active cases in the world. Nez and his administration instituted measures — a lockdown and mask mandates — to slow the spread of the virus.