“In the basest terms, cartel associated gangs distribute the meth in Indian Country. Their operatives embed themselves on reservations and in Tribal communities. The meth comes in, and Tribal women and girls are trafficked out,” Rain stated.

“Like 1800s European traders, they establish relationships with young women to ingratiate themselves and then they infiltrate extended families and communities. Soon after, the tragic consequences we know all too well are felt,” said the director of the award-winning Murdered and Missing Indigenous Women & Relatives (MMIWR) documentaries, Somebody’s Daughter (1492-) and Say Her Name.

“Human trafficking is a serious issue worldwide and for Indigenous peoples. It affects all populations, including adults, children, men, women, and all ages and economic classes. Anyone can be affected by these dangerous crimes, so it is important to learn more about human trafficking and to begin educating our children to empower them at a young age,” urged President Nez.

Somebody’s Daughter was the first documentary to layout, stage by stage, the nexus between drug cartels, their gang affiliates, and the human trafficking of Indigenous women and girls into modern day slavery. The new version of the film, Somebody’s Daughter (1492), further exposes the connection in a must-see examination of the MMIWR crisis 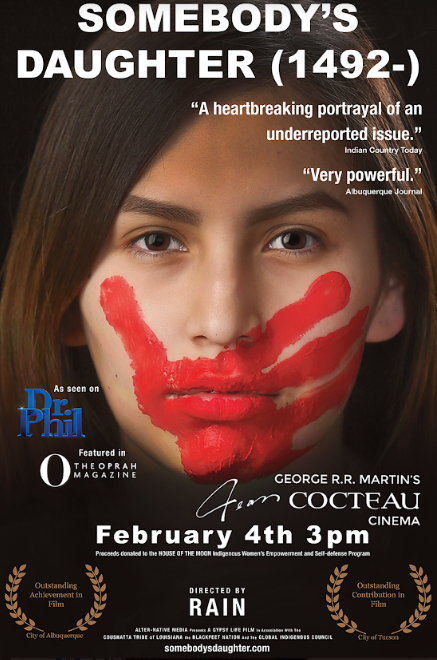 In the film, Tribal leaders speak forthrightly about the escalation of cartel and gang operations in Indian Country, and that the severity of the emergency continues to elude federal law enforcement due to systemic and institutional failings. Several gangs are identified as operating on reservations in the northwest, including the Mexican Mafia and the associated Sureños.

Leaders from the Blackfeet Nation and Confederated Salish and Kootenai Tribes cite the presence of the Mara Salvatrucha, or MS13, the Los Angeles street gang of El Salvadorian origin that emerged in the 1980s and has since become one of the most notorious gangs in the Western Hemisphere.

Detective Guy Baker of the Missoula PD and FBI Safe Streets Task Force provided one of the most eyebrow raising moments in the first cut of the film. Baker described the meth that is distributed on Montana reservations as “coming from super-labs in Mexico” and outlined its passage up the West Coast to Washington State before it reaches Montana.

Defense Secretary Sandoval’s statement supports Baker’s insight and confirms that cartels are using “industrial-scale labs” to produce massive quantities of methamphetamine and fentanyl, the synthetic drugs being easier and cheaper to produce and distribute than heroin and marijuana.

“There was a change in consumption, there was a change in drug markets due to the ease of producing synthetic drugs,” said Sandoval. He explained that cartels in Mexico are importing fentanyl from China, which they press into pills that pass for prescription drugs.

On the doorstep of Montana’s Tribal Nations, federal authorities in Washington State have reported a 275% increase in arrests related to synthetic drugs.

Recent drug seizures of meth and fentanyl – among the largest on record - offer a chilling warning for Tribal communities. Over 17,500 pounds of meth was seized at the Otay Mesa border crossing in San Diego, California. During December 2021, drug busts in Nogales and Phoenix, Arizona resulted in the seizure of thousands of pounds of meth.

The US Drug Enforcement Administration (DEA) estimated that some 700,000 lives were potentially saved by the Phoenix confiscation alone. The agency is now focused on the Sinaloa Cartel.

Arizona, homeland to 22 federally recognized Tribes, is described by the DEA as “the gateway” to the tsunami of synthetic drugs.

“The federal government is totally unprepared to counter this threat to Tribal communities and its pathetic response to the MMIWR tragedy is tantamount to criminal negligence. It’s leaving Tribal governments in a terrible position,” said Rain.

During a panel discussion moderated by Congressman Greg Stanton (D-AZ) at Phoenix’s Heard Museum in December, Rain called for “the repeal or radical overhaul” of the Major Crimes Act, a Congressional Oliphant case fix, and criticized the federal government’s “incremental legislative, executive, and secretarial level approach” to MMIWR.

He contends that Secretary Haaland’s claim that her Murdered and Missing Unit (MMU) puts “the full weight of the federal government” into investigating MMIWR cases “is patently untrue.”

“The Secretary created the MMU within the Bureau of Indian Affairs Office of Justice Services. If the BIA equates to the full weight of the federal government, we’re in even worse shape than I thought,” said Rain, who has also advocated for “BIA law enforcement to be dismantled, reimagined for the 21st century, and rebuilt from the ground up with adequate resources to actually serve and protect Indian Country.”

“President Biden took an important but limited step,” he continued. “But the answers he is seeking through his AG Garland-led committee already exist in the yet to be introduced Reduce, Return and Recover Act. With this impending onslaught of drug and human trafficking, those provisions addressing extractive industry man camps and human trafficking tracks to port cities are vital,” explained Rain.

In Somebody’s Daughter (1492-), Detective Baker explains how the man camps in the Bakken fracking fields have become a major “supply and demand” engine of MMIWR on the northern plains.

“We need to be very clear about who and what drives the demand for sex trafficking. Let’s not allow the criminal enterprises and inhumanity of drug cartels, affiliate gangs, and human traffickers to be conflated with those relatives on the southern border who have over 25,000 years of heritage as First People of this land but are denied access to their kinfolk north of it and are forced to endure dire conditions as they seek to escape persecution,” the filmmaker said.

“The ‘illegals’ are cartel and gang operatives, the coyotes and human traffickers, and those who enslave and exploit their victims. Those Johns awash with cash who create this market for misery aren’t sat in squalid migrant camps on the border,” Rain asserted.

Navajo Nation Delegate Amber Kanazbah Crotty, who was also among the panelists at the Heard Museum, offered Congressman Stanton an insight into Indian Country’s needs.

“The Navajo Nation and Indian Country does not have enough FBI agents,” she said. “Navajo Nation, Indian Country, does not have the jurisdiction or the resources that they need. And in 2018, when the FBI and BIA felt that missing Indigenous women did not matter, that’s how they felt and continue to feel about us. Because nothing has changed in the last three years. Nothing has changed,” she insisted.

Councilwoman Crotty will be among the leaders for the Navajo Nation’s Human Trafficking Awareness Walk in Window Rock on January 24.

On February 4, during American Indian Day in New Mexico, an MMIWR walk for justice from the Santa Fe Plaza will conclude at George RR Martin’s Jean Cocteau Cinema for a special double-feature of Somebody’s Daughter (1492-) and Say Her Name. Rain and his aunt, traditional leader, environmental ambassador, and actor Casey Camp-Horinek are scheduled to speak.

Casey Camp-Horinek most recently appeared in FX’s acclaimed Reservation Dogs. She is a founder of the “House of the Moon” Indigenous Women’s Empowerment and Self-Defense Facilitator Training Program. Proceeds from the screenings will support the program.

“It’s beyond awareness,” said Councilwoman Crotty on the urgency for a cooperative and comprehensive strategy at every level to impact MMIWR and human trafficking. “We need action. We need our federal partners, our state partners, and our tribal partners to do everything in their power.”


The Native News Health Desk is made possible by a generous grant from the National Institute for Health Care Management Foundation as well as sponsorship support from RxDestroyer, The Leukemia & Lymphoma Society and the American Dental Association. This grant funding and sponsorship support have no effect on editorial consideration in Native News Online.
About The Author
Author: Arianna AmehaeEmail: This email address is being protected from spambots. You need JavaScript enabled to view it.
Breaking News