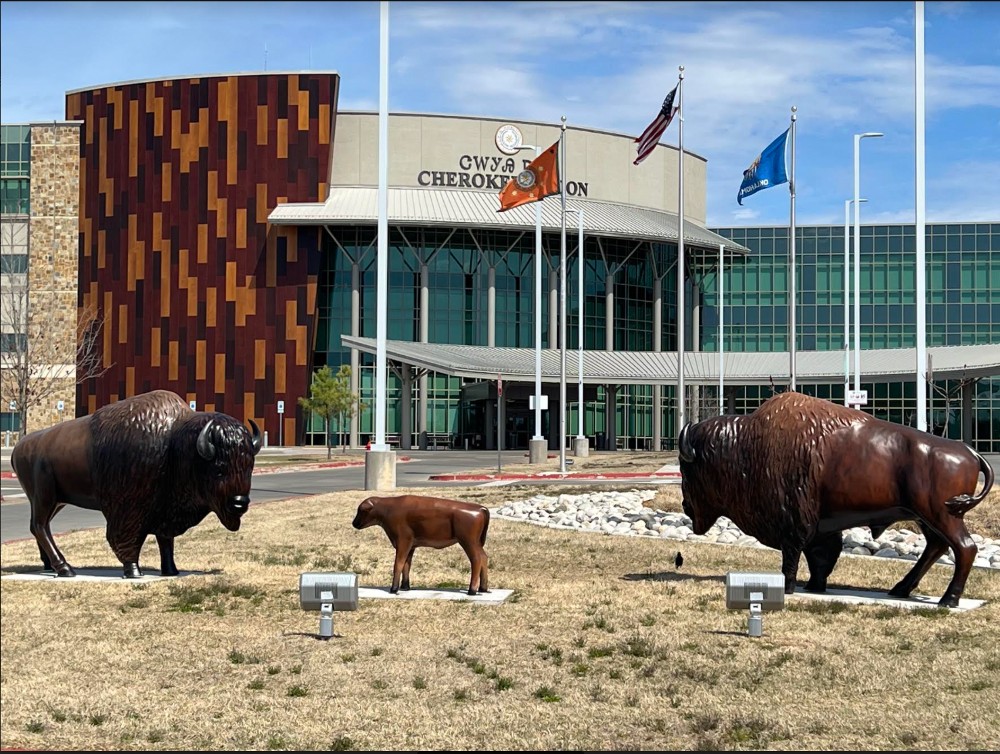 Tahlequah, Okla.—The nation’s most populous federally recognized Tribe also boasts the largest, by square footage, and most comprehensive health center operated by a Tribe in Indian Country. The Cherokee Nation Health Services (CNHS) is the largest tribally-operated health care system in the United States. It opened Cherokee Nation Outpatient Health Center, a 469,000-square-foot, four-story outpatient health facility, on the campus of the W.W. Hastings Hospital campus in Tahlequah in October 2019.

Due to the COVID-19 pandemic, the health center hasn’t reached full capacity since its opening, said Executive Director of Health Services Dr. R. Stephen Jones. The pandemic has caused many healthcare organizations to provide healthcare to patients through telehealth, including the Cherokee Nation. However, the challenge with telehealth for Cherokee Nation is a patient’s ability to access a broadband connection in a rural part of eastern Oklahoma.

“We are transitioning to providing more services in person,” Dr. R. Stephen Jones told Native News Online. “More people are feeling safer coming in to our facilities over the last three months, but we are still working on a hybrid model of in-person or telehealth.”

In addition to the state-of-the-art outpatient center in Tahlequah, the Cherokee Nation currently has four other expansion projects at other outpatient clinics throughout the region in Vinita, Nowata, Muskogee, and Ochelata. The Cherokee Nation has invested more than $12 million in these locations.

“All four locations are expanding patient access to care,” said Jones of each expansion project.

The tribe has more than $300 million in healthcare infrastructure and is planning to break ground this November 2022 on a new $400 million 375,000-square-foot, six-story hospital to replace the 40-year-old W.W. Hastings Hospital that was built in the 1980’s to serve 60,000 patients per year. The CNHS has reported that in recent years the hospital is serving upward of 500,000 patients per year.

“One of the most important things we are doing right now for the Cherokee Nation is healthcare,” said Principal Chief of the Cherokee Nation Chuck Hoskin, Jr. said in an interview with Native News Online. “My predecessor did an amazing job of improving our health care clinics and we’re trying to fill the gaps of meeting the needs of our community.”

The growing healthcare campus is welcoming, well-manicured, visibly state-of-the-art, and includes the first medical school on Tribal land in history. Through a partnership with Oklahoma State University’s College of Osteopathic Medicine, the Cherokee Nation established the first tribally affiliated college of medicine in the nation. It opened with an inaugural class of 54 in August 2020 with 20 percent of its opening class American Indian.

The goal of the Cherokee Nation’s health department is to care for people “cradle to grave”—from the time citizens are born and until they pass away. Unlike private health systems, CNHS doesn’t have to sell services to its patients and can focus more on the quality of healthcare.

“We will be as good as stewards as we can with the resources that are provided to us,” said Jones of how the organization provides healthcare. “We don’t have to worry about our doctors selling services, they get to treat people how they were trained to treat them and what their needs are.”

“We can be as good, or better, as any other healthcare system in the nation,” Dr. Jones said of CNHS.

The Cherokee Nation Health Services doesn’t serve the public, however. Some services are provided only to members of the Cherokee Nation, but many other services such as routine checkups are available to any member or beneficiary of a federally recognized tribe.

The Tahlequah based Cherokee Nation has 410,402 Tribal members throughout the world. Enrollment for the Tribe has increased since the end of 2021 and is anticipated to continue to increase due largely to Hoskin’s June 1 deadline to disperse American Rescue Plan Act funding of $2,000 per member. It’s the first time the Tribe has attempted a disbursement to its entire membership.

“Our population has gone up rapidly and has challenged our system compared to what we’re used to processing,” said Principal Chief Chuck Hoskin, Jr. to Native News Online. “A lot of people are applying to be Cherokee.”