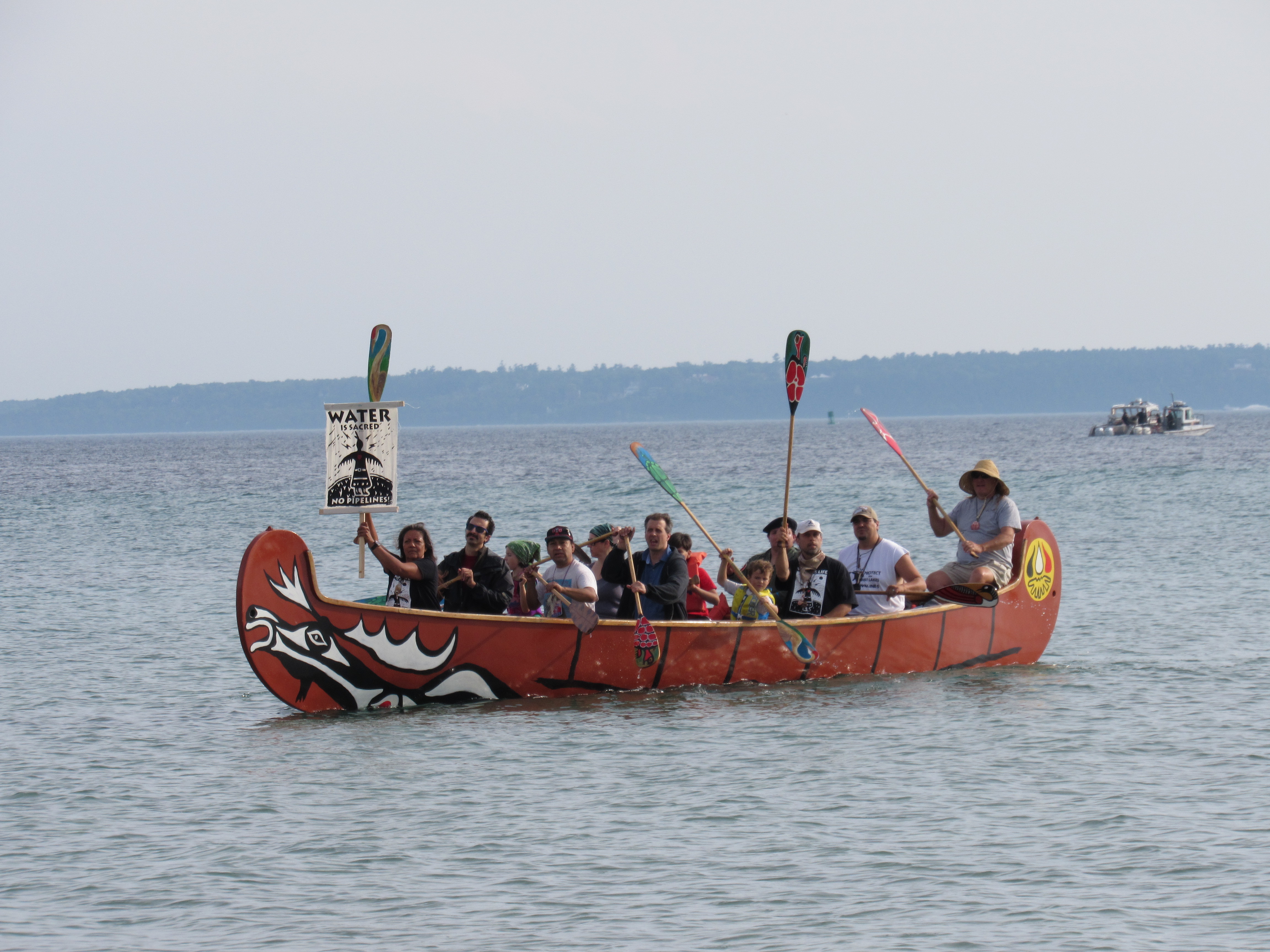 The Enbridge Line 5 currently consists of two 20-inch pipelines, constructed in 1953, that are beneath the Straits of Mackinac, the body of water that separates Michigan’s lower and upper peninsulas and Lake Michigan from Lake Huron. The two pipelines lie between 100 – 270 feet below the water surface and are separated by 1,000 feet from each other.

Enbridge Energy is proposing to construct a tunnel under the bed of the Straits of Mackinac between Point LaBarbe, St. Ignace, Mackinac County, and McGulpin Point, Mackinaw City, Emmet County, Michigan. This tunnel would house a new 30-inch pipeline for light crude oil and liquid natural gas, replacing the existing dual submerged pipelines crossing the Straits of Mackinac,

Several tribes from Michigan have protested Line 5 for years and are opposed to Enbridge’s proposed project.

“I have concluded that an EIS is the most appropriate level of review because of the potential for impacts significantly affecting the quality of the human environment,” said Jaime A. Pinkham, acting Assistant Secretary of the Army for Civil Works. “USACE will ensure all potential impacts and reasonable alternatives associated with this project are thoroughly analyzed and will ultimately support a decision on the permit application. The USACE received thousands of public comments and tribal input on the proposed project, which warrant further review through an EIS, including potential impacts to navigation.”

“Line 5 is an imminent spill just waiting to happen.  Line 6 at the Kalamazoo River was the worst inland oil spill in American history. The Line 5 easement was issued without any consultation with tribes and with technology that is now over 67 years old.  Too many shortcuts and risks were taken at an earlier era,” Chairman Payment said to Native News Online on Wednesday afternoon.  “It is time to rectify this by conducting a full environmental impact study to determine whether having a million gallons of oil putting our Great Lakes [at risk] is responsible.”

Little Traverse Bay Bands of Odawa Indians Chairperson Regina Gasco-Bentley says the EIS is a step in the right direction.

“Water is a critical resource that we all need, and we all have in common— we must protect it. Though we still have work to do, this is a good step in the right direction to look out for our future generations,” Chairperson Gasco-Bentley said.

The tribal resistance to Line 5 drew the attention national last year when Earthjustice and the Native American Rights Fund filed a lawsuit on behalf of the Bay Mills Indian Community, based in Brimley, Mich.

“We are encouraged to see that the Army Corps of Engineers heeded our call to undertake a more rigorous analysis of the environmental impacts--and impacts on treaty-protected interests--of Enbridge’s massive tunnel project underneath the Straits of Mackinac. Bay Mills remains very concerned that the pipeline threatens our way of life,” President Gravelle told Tribal Business News.

“Overall, Bay Mills Indian Community is involved in the permitting process before the USACE, the permit process before the Michigan Environment, Great Lakes & Energy where we recently filed a contested case petition due to the approval of the tunnel permits in January 2021, are a litigating party before the Michigan Public Service Commission, and served as an amici in Michigan, et al. v. Enbridge Energy, et al., and engages in tribal consultation with numerous state and federal agencies on the Line 5 issue,” she continued.

The USACE said in a release the agency will ensure all voices will be heard in an open, transparent and public process through development of the EIS and is committed to ensuring that meaningful and robust consultation with tribal nations occurs per President Biden’s Memorandum on Tribal Consultation and Strengthening Nation-to-Nation Relationships, January 26, 2021.