Further Down the Line: Michigan’s Shutdown Order and What it Means for Line 5 in Wisconsin 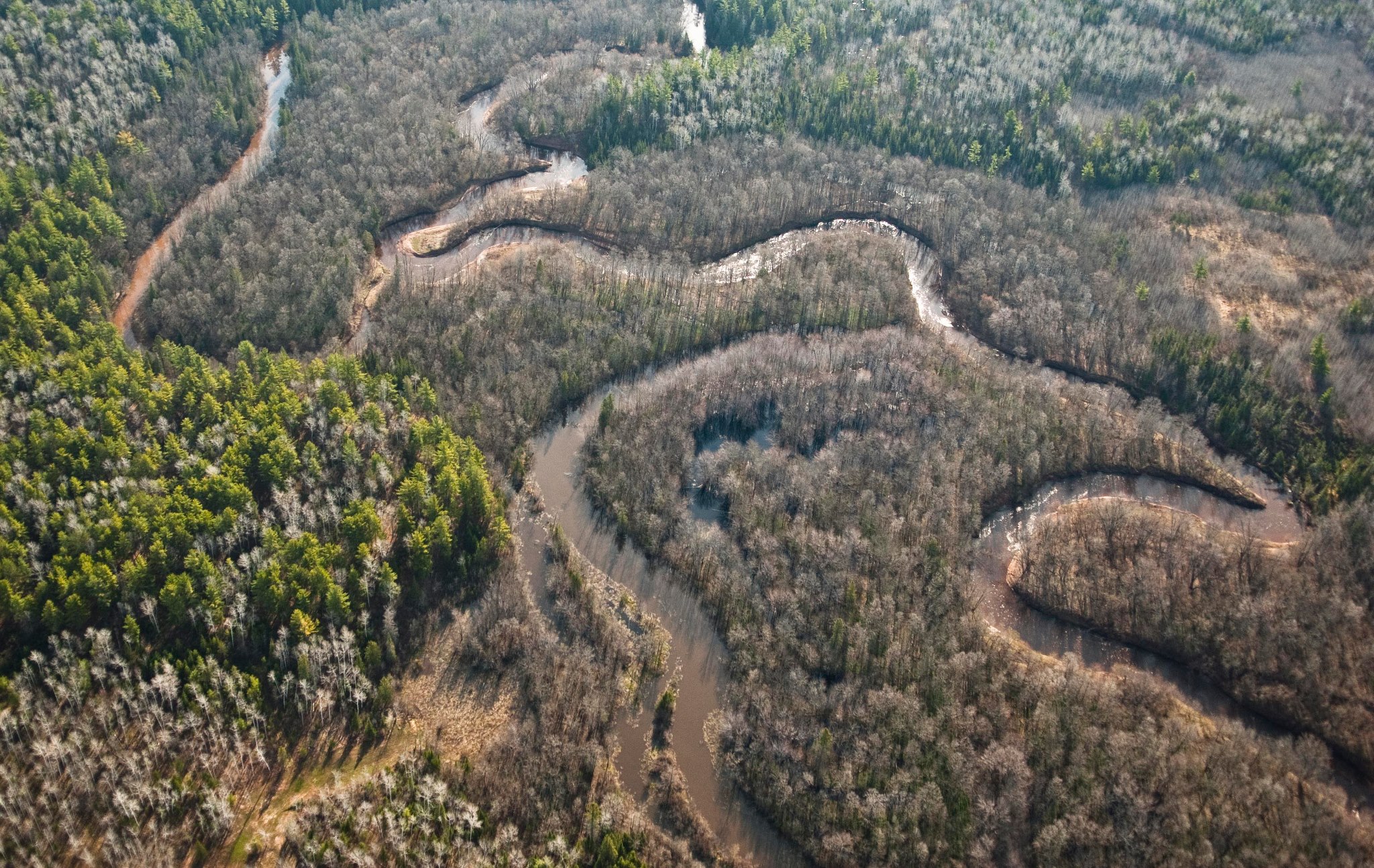 Michigan Gov. Gretchen Whitmer issued a shutdown order for a controversial pipeline in the Great Lakes last Friday. Line 5 is operated by the Canadian energy company Enbridge, and crosses beneath the Straits of Mackinac where Lake Michigan and Lake Huron meet. Gov. Whitmer’s order cancelled Enbridge’s easement in the straits, and gave the company until May of 2021 to stop the flow of oil.

“I would like to thank all of the Anishinabekwe and all Ogitch’da (warriors) for their efforts in convincing our Governor to shut down 5,” said Aaron Payment, Chairperson of the Sault Ste. Marie Tribe of Chippewa Indians and First Vice President of the National Congress of American Indians, who has spent years advocating for Line 5’s removal. “Our waters are our life blood. Oil and water don’t mix, so I am excited and pleased with the Governor’s announcement.”

Enbridge Executive Vice President Vern Yu called the shutdown order “a distraction from the fundamental facts,” and said Enbridge would continue to ensure the reliable delivery of energy. The company maintains that there is “no credible basis” for Michigan’s termination of their easement.

Although the order pertains primarily to the Straits of Mackinac, it has implications for communities all along the pipeline’s 645-mile route. In Northern Wisconsin, the Bad River Band of Lake Superior Chippewa has cause for celebration—though key questions remain unanswered.

In August of 2019, the Band discovered a section of Enbridge Line 5 that had emerged above a stream on their reservation. The exposed section of pipe was 49 feet in length and ran along a tributary to the Bad River, just a few miles upstream from Lake Superior. It was mostly unsupported from below due to erosion, according to the reservation’s natural resources department. Buried in 1953, the pipeline now moves up to 23 million gallons of liquid fossil fuels per day between Superior, Wisconsin and Sarnia, Ontario.

The discovery of Line 5’s exposure solidified the Bad River Band’s resolution not to renew their leases with the Canadian oil company, many of which had expired six years earlier.

“What we have here is a foreign corporation that is holding our water resources hostage for their profit,” said Mike Wiggins, Tribal Chairman for the Bad River Band. “We want to be around another thousand years. We need our water resources.”

The Band filed a federal lawsuit against Enbridge in July of 2019 due to the company’s continued operation of Line 5 through the reservation despite the expiration of leases, and the pipeline’s increasingly precarious location near an eroding bank of the Bad River. Even after a $24 million settlement offer from Enbridge last autumn, the tribal council exercised their sovereignty and remained adamant.

“Our life is rooted in a connection to the natural world,” the Bad River Tribal Council wrote in their 2019 resolution. The council pledged to “take all action permitted under the law for Line 5 removal within the waters of the reservation and Mashkii-ziibi (Bad River) watershed.” 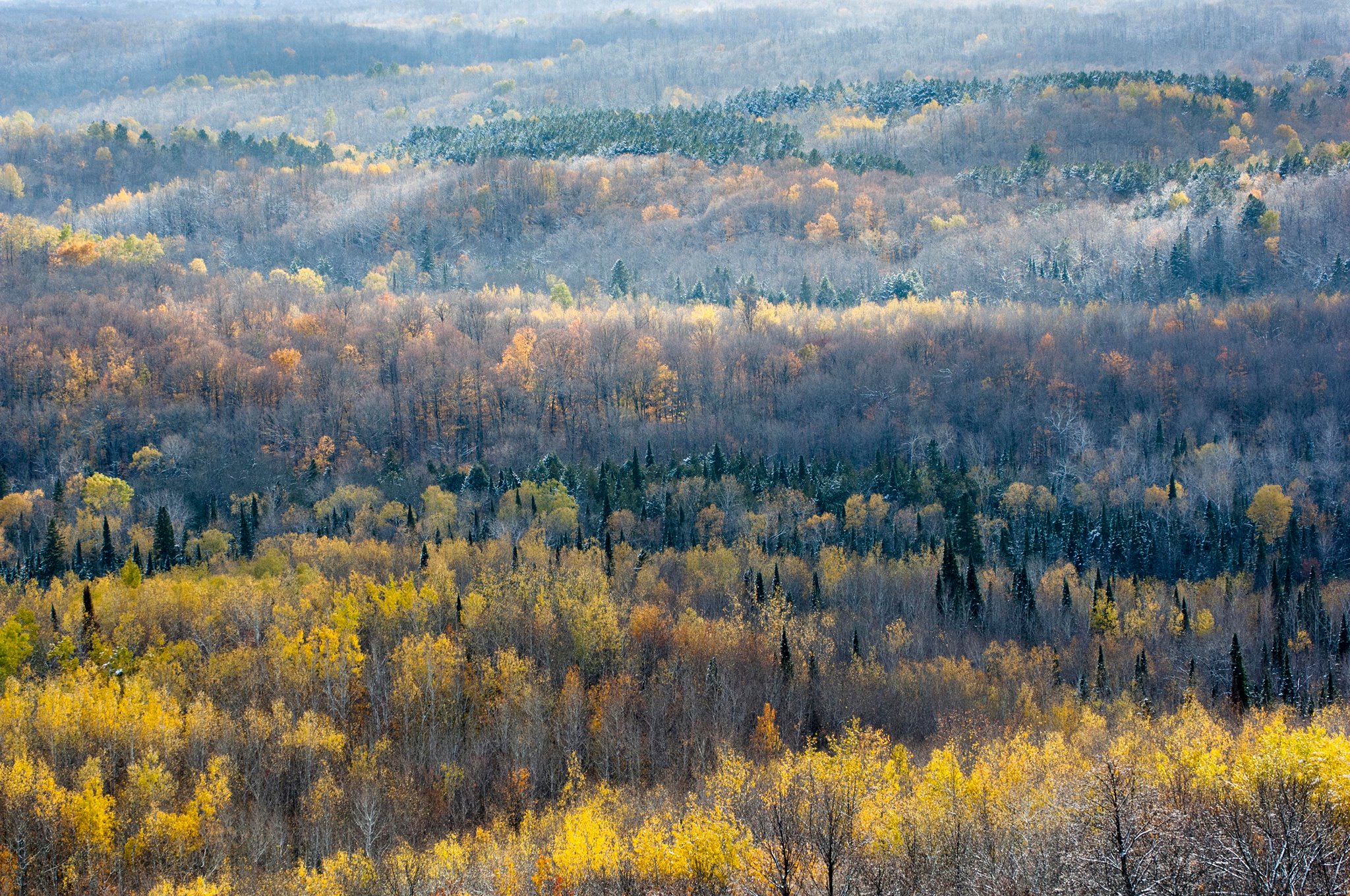 The Penokees hills in late fall. Photo by Pete Rasmussen.

In response, Enbridge made plans for a 40-mile reroute. The proposed reroute would lead Line 5 out of the reservation and into the Penokee Hills: two elevated ridges of volcanic rock, 20 miles south of Lake Superior.

Gov. Whitmer’s shutdown order raises questions for a company that has already spent millions in pre-construction and compensation for property owners and municipalities along the reroute. Enbridge communications specialist Juli Kellner said she has not yet heard of any changes or impacts to the company’s plans in Wisconsin.

The Penokees’ picturesque streams tumble down 2.7-billion-year-old bedrock before draining into the Bad River, which winds its way through a forested clay plane and into Lake Superior. Near the mouth of the river is a vast wetland called the Kakagon Sloughs. It is home to the largest remaining wild rice beds in the Great Lakes, where the Ojibwe have carried out traditional harvesting practices in what is now the Bad River Reservation for centuries. Wild rice is extremely sensitive to disturbance—a rupture of Line 5 would decimate these rare, in-tact beds.

The proposed reroute is still within the watershed and poses many of the same risks. But removing the 67-year-old pipeline from the reservation is the only litigation currently before the U.S. District Court for Western Wisconsin.

Michigan’s shutdown order, however, has striking parallels to litigation in Wisconsin that could result in a similar outcome.

Gov. Whitmer’s order came after the Michigan DNR reviewed easement violations identified by Attorney General Dana Nessel. Nessel filed a suit against Enbridge in June of 2019, citing the public trust doctrine as grounds for a permanent shutdown of Line 5 in the Straits of Mackinac.

The public trust doctrine is the principle that certain natural and cultural resources are to be held in trust for public use. It was first accepted by the U.S. Supreme Court in 1842.

Wisconsin was one of three states that got involved with Michigan’s case against Enbridge last November, supporting Nessel’s position. The role of the Wisconsin DNR and Gov. Tony Evers in determining Line 5’s future in the Bad River watershed remains to be seen.

"By way of connectivity, (Gov. Whitmer) has stood up for our reservation, for the fisheries and for all the beings that rely on these water resources,” Wiggins said, adding that Wisconsin Gov. Tony Evers should look to Michigan’s action on Friday as an example. “Follow her lead and stand up. The state law is there, let’s acknowledge that and get Line 5 out of here.”