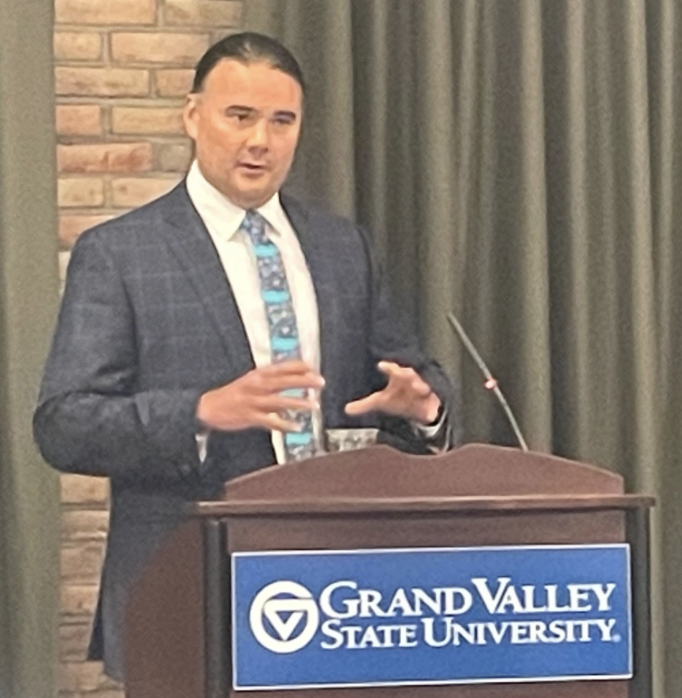 Newland, who grew up and led the Bay Mills Indian Community in Brimley, was among friends and family. A sister and her husband, who live in the Grand Rapids area, and a college roommate from Newland's alma mater, Michigan State University, also attended the event.

"It's always great to come home — 'homeish,'" Newland said. "I come from a community five hours north of here, but it is really good to be back here in Michigan. I really enjoy my job, and it's a privilege to serve in this position. A part of my job is to meet with students and community members across Indian Country."

Newland, who is on his second tour of duty working in Indian Affairs in the U.S. Department of the Interior, spoke about his work under the leadership of Secretary Deb Haaland (Laguna Pueblo). Upon establishing the Federal Indian Boarding School Initiative soon after the disclosure of the discovery of 215 unmarked graves at the closed-down Kamloops Residential School in British Columbia, Haaland appointed Newland to lead the initiative that was tasked with providing her with a report on Indian boarding schools in the United States.

The 106-page report penned by Newland and released on May 11, 2022, details for the first time that the federal government operated or supported 408 boarding schools across 37 states, including Alaska and Hawai'i, between 1819 and 1969. About half of the boarding schools were staffed or paid for by a religious institution. The investigation identified marked and unmarked burial sites at 53 of those schools. However, the DOI expects to find the number of children buried at boarding schools across the nation to be in the "thousands or tens of thousands" as the investigation continues.

"This is the first time the United States federal government has held itself to account with honesty about what the schools were and why they were put into place," Newland said on Thursday. "This report made a number of findings. First, based on research, we confirmed the purpose of these boarding schools was to take our land and to forcibly assimilate Indian children," Newland continued.

He spoke about the sexual, physical and emotion abuse Indian children endured while attending the boarding schools.

He later talked about the Biden administration's commitment to Indian Country by taking the trust responsibility to tribes seriously.

"Our view is that the trust responsibility means that we have to work in partnership with tribes, not to destroy the tribal way of life, but to revitalize it," Newland said.

Part of the revitalization of Indian Country means investing in tribes and urban Indian health centers in the country, according to Newland.

The investment funding is meant to modernize health centers and tribal communities, provide Internet access, and to assist those tribes that lack running water to their homes on tribal lands.

Prior to speaking, Newland spent time with GVSU administrators and students who had an opportunity to learn more about his role within the Biden administration leading Indian Affairs at the Department of the Interior.

"It was a treat for Grand Valley State University to host Assistant Secretary Newland," Lin Bardwell (Little Traverse Bay Bands of Odawa Indians), Native American Student Initiative Coordinator at Grand Valley State University, said. "Particularly, for our students who normally would not have such an opportunity to converse with someone in such a high level at the Interior Department. Given he is a "home-grown" Michigan rez kid who grew up to work in Washington sends a strong message to stay in school to complete the education to achieve their dreams."