After nearly five months of remote learning and summer program cancelations, school districts across the country are developing plans to reopen schools by working with state governments. But unlike most public learning institutions, schools operated by tribes and the Bureau of Indian Education (BIE), which is overseen by the U.S Department of the Interior – Indian Affairs, fall under other jurisdictions.

Lac Courte Oreilles Ojibwe School tested out Zoom with some middle school students in April via Facebook.On Aug. 6, the Interior Department sent an internal memo to all BIE employees detailing its plan to return to in-person learning. The memo, shared with Native News Online and signed by Tara Sweeney, the assistant secretary of the Interior for Indian Affairs, states that “BIE-operated K-12 schools will use a uniform start day of September 16, 2020, for the 2020-2021 school year. This will allow schools to prepare for the safe return of students and staff while following the CDC Guidelines for opening schools. Students more effectively learn and grow while attending school during in-person academic instruction.”

The memo specifically pertains to BIE schools, but the bureau recommends that tribally-operated schools adhere to similar protocols.

In Hayward, Wis., Lac Courte Oreilles Ojibwe School Superintendent Jessica Hutchison understands the complexity of schools needing to reopen. Parents have voiced concerns for their children’s safety as well as their need for them to return to work. As well, Hutchison recognizes the challenges the reservation has had with the opioid epidemic, which has left some students in more vulnerable situations.

“None of the trauma and turmoil that Native students face on a daily basis has gone away,” Hutchison said

The memo outlines reopening action plans for staff, day-school instruction for off-reservation boarding schools and providing Wi-Fi access to schools and families through mobile hotspots and internet devices like Jetpack.

“Decisions are made without reaching out to the people it primarily affects,” said Sue Parton (Kiowa), who has served 10 years as union president of the Federation of Indian Service Employees (FISE).

Headquartered in Albuquerque, N.M., FISE represents approximately 5,800 employees that work within four federal departments and BIE-operated schools across 22 states. The union advocates for the fair treatment of employees and wants to ensure the best working environment to provide their services.

Parton said there had been communication problems with the Interior Department since March, around the time the COVID-19 pandemic picked up steam in the United States. BIE schools were four to six days behind public school shutdowns, and contract educators have seen significant delays in getting paid.

“We do what we can to protect our employees and keep people safe,” Parton said. “If [the bureau] had notified the union before, we could have avoided a lot of the issues going on now.”

A lack of federal leadership during this crisis has led to many states and agencies to fend for themselves and make their own decisions when moving forward with the new academic year.

“We’ve had so many employees call in and ask do we listen to the governors, tribal leaders, school boards? We just don’t have all the answers,” Parton explained. The Office of Public Affairs – Indian Affairs did not respond to requests for comment.

Some governors have requested delayed start dates for the fall semester while others will implement hybrid and in-person learning, the latter will require wearing masks and practicing social distancing measures. 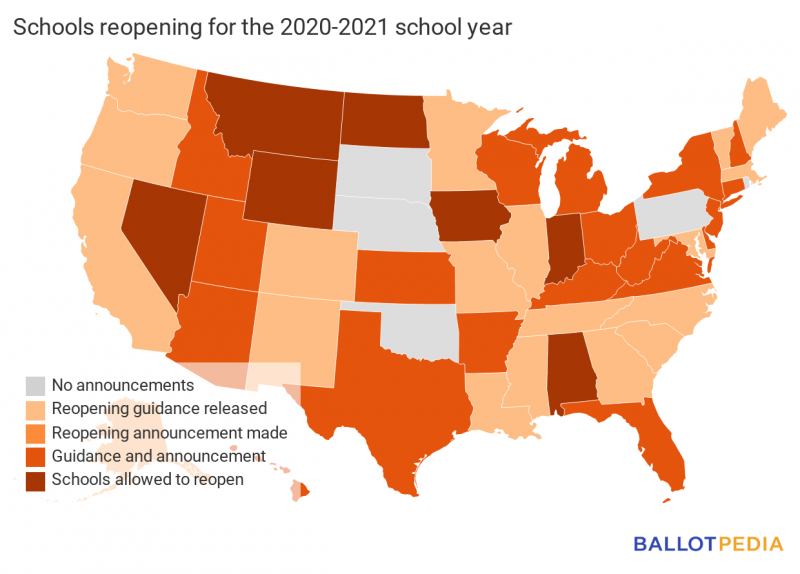 In Arizona, Gov. Doug Ducey ordered public schools to reopen for on-site learning on Aug. 17 for students who have nowhere else to go. Clarifying the governor’s order, Superintendent of Public Instruction Kathy Hoffman said it meant each school district must open at least one site for students to attend, meaning that it doesn’t require every school to open. Schools in New Mexico will not be able to open for in-person instruction until after Sept. 7, and individual school districts will ultimately decide when classes begin.

According to a USA Today report detailing state protocols for school reopenings this fall, “local school districts have the authority and flexibility to make decisions that best accommodate their communities… Many of the requirements and suggestions are dependent on whether states have been able to contain the spread of the coronavirus. Most states’ guidelines were released at the beginning or in the middle of June, before a resurgence of COVID-19 infections was reported in many states across the country.”

The Washington Post reported that more than 97,000 students tested positive for COVID-19 in the last two weeks of July, with Arizona reporting the most cases per 100,000 children. According to the article, the steep rise in cases could be the result of more comprehensive testing occurring throughout the country. Overall, black and brown communities have been disproportionately affected by the virus.

There are 55 BIE-operated schools across the country, with the majority in Arizona (19) and New Mexico (23). Parton worries about the consequences of returning to in-person learning, including the safety of families and staff members who live in multi-generational households.

Parton would like to see more federal resources distributed in order to make distance learning feasible, or the implementation of a “catch-up” plan after the pandemic is over, such as year-round learning or summer intensives.

“I believe in the value of educating our people,” she said. “But it needs to be done safely and to keep [the virus] from spreading.”