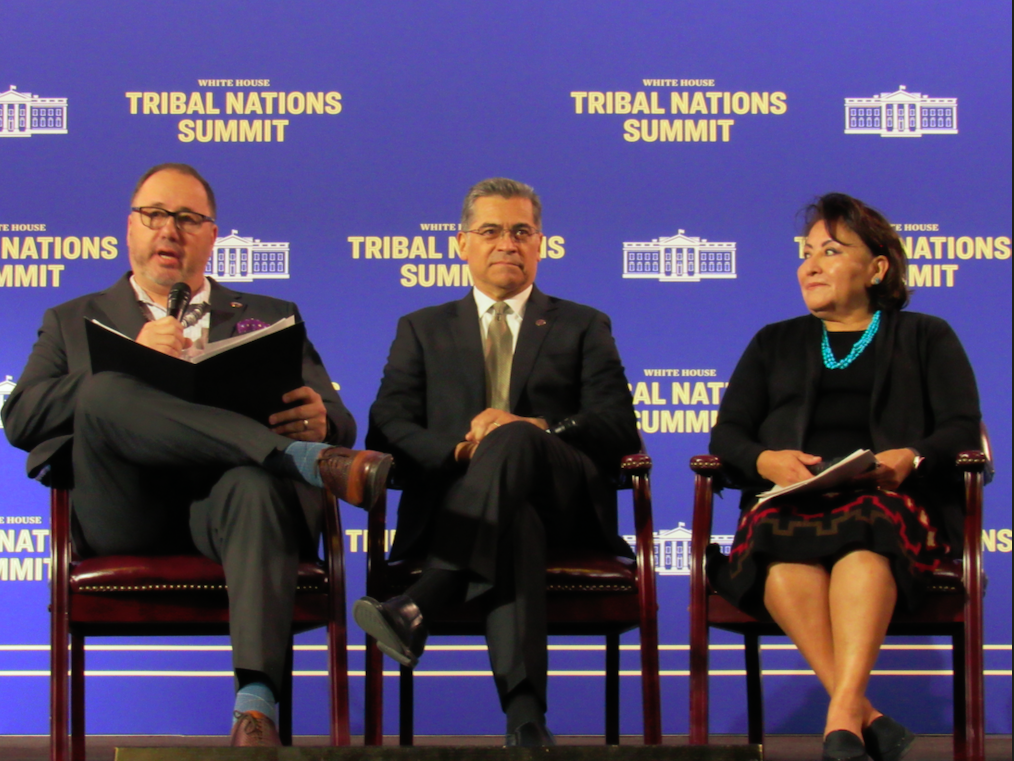 WASHINGTON—Health and justice were the buzzwords that drove conversation on Thursday, Dec. 1, the second day of the White House Tribal Nations Summit that drew more than 300 tribal leaders from across the country to discuss policy with federal employees.

Among them, he told audience members that his administration created an outreach service liaison position at the Department of Justice to address the Crisis of Missing and Murdered Indigenous People; committed $135 million to help relocate 11 Tribal communities impacted by climate change from Maine, Louisiana, Arizona, Washington and Alaska; and that he intended to sign a Presidential Memorandum establishing uniform standards be implemented across all federal agencies on how tribal consultations are conducted.

In his latest budget, released in March 2022, Biden requested Congress make $9.1 billion to the Indian Health Service mandatory rather than “discretionary” to protect the federal entity that delivers health care to 2.56 million American Indians and Alaska Natives nationwide from budget uncertainties. Tribal leaders have advocated for mandatory or —at the very least, advanced funding — for about a decade.

Unlike the Veterans Association, Medicare, and Medicaid, IHS is the only major federal healthcare program subject to annual appropriations, making tribal citizens vulnerable to slashed or delayed funding in instances of drawn-out budget negotiations or government shutdowns.

“Delayed funding caused one of our citizens to not get the [medical attention] that she needed that would have identified life-threatening cancer at an earlier stage,” Francis said. “Another, only due to an emergent event, was her cardiology issue identified. It delays in being able to protect our citizen’s immediate inpatient substance abuse disorder treatments [that] can be the difference between life and death.”

Francis moderated a panel on health equity today with Secretary of the Department of Health and Human Services Xavier Becerra and IHS Director Roselyn Tso. Tso said that mandatory funding would help IHS achieve its mission.

“Having significant, consistent, and reliable resources flowing to Indian Country is very important,” Tso said. “We need to have mandatory or advanced appropriations for us to make sure that we’re better or better able to plan [and] we’re better able to address our facilities.”

Becerra encouraged tribal leaders not to let anyone in Congress believe it’s OK to lead a government shutdown and not provide for the health care of communities throughout the country.

“There are other aspects of government that are mandatory like Medicare, Medicaid as a direct commission, which must be funded by law, regardless of what Congress says tinkering with the budget,” Becerra said. “There is no reason why the health care of anyone else in America should be put at stake simply because Congress decides to have a fight on how much to fund the other parts of government. You need to make that very clear.”

Becerra said that, while the administration initially pushed for mandatory funding in last year’s budget, Congress pushed back, but that Congress isn’t “there yet.”

Instead, the administration proposed advanced appropriations—” which isn’t a long-term permanent solution”—but would give tribal health care workers their budget for up to two years into the future.

To help, Chief Francis encouraged tribal members to reach out to Outgoing Speaker of the House Nancy Pelosi (D-CA), Senate Majority Leader Chuck Schumer (D-NY), and Leader Mitch McConnell (R-KY) to advocate for advanced corporations to be included in this omnibus appropriations bill.

It’s the first updated memorandum of understanding that updates the operational agreements between the two agencies since 1993.

In July, Garland said that his office directed each US Attorney’s Office with Indian Country jurisdiction to develop updated operational plans by the year’s end to better promote public safety in tribal communities.

Marlys Big Eagle, former Victim Witness Coordinator for the United States Attorney’s Office for the District of South Dakota, will serve as the new outreach service liaison at the Department of Justice to address the Crisis of Missing and Murdered Indigenous People.

Department changes were the result of feedback the administration received from more than 100 tribal governments during six formal consultations throughout 2022, Garland said.