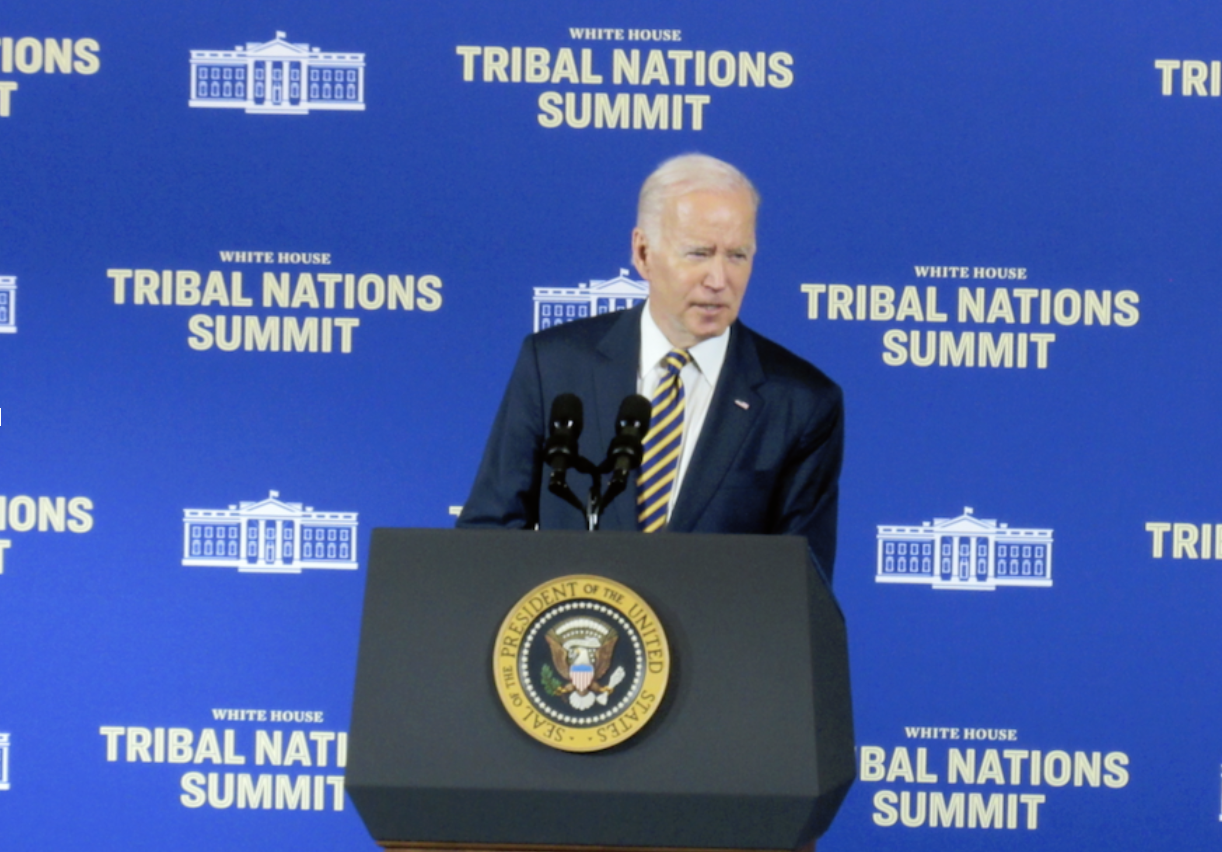 A room full of leaders from more than 300 Tribal Nations on Wednesday whooped and hollered as President Joe Biden took the stage to address them at the White House Tribal Nations Summit in Washington D.C.

“To all the tribal leaders: thank you,” President Biden said on Nov. 30. “Thank you for being here and for your partnership. I made a commitment when I ran for president … that my administration would prioritize and respect nation-to-nation relationships. I hope our work in the past two years has demonstrated that we’re meeting that commitment.”

The two-day summit — the first in-person White House Tribal Nations Summit in six years— brings together tribal leaders from across the country for nation-to-nation discussions. On day one, federal government officials, cabinet members, and tribal leaders participated in panel discussions on education and Native languages, mental health, access to capital and economic development, and climate and clean energy.

The Biden-Harris administration also used the venue to highlight administrative successes and announce new initiatives, including an electric vehicle initiative for Tribal Nations, the creation of an outreach service liaison position at the Department of Justice to address the Crisis of Missing and Murdered Indigenous People; a $135 million commitment to help relocate 11 Tribal communities impacted by climate change from Maine, Louisiana, Arizona, Washington, and Alaska; and the president’s intention to sign a new Presidential Memorandum establishing uniform standards be implemented across all federal agencies on how tribal consultations are conducted.

“I have also requested $9.1 billion—that’s with a B—for the Indian Health Services,” Biden said. “I’ve asked Congress for the first time ever to make that funding a mandatory part of the federal budget. That means the funding would always be there, and it insulates Indian Health Services from budget uncertainties to make it harder to deliver the care Indian Country needs and deserves.”

An audience member yelled out, “thank you,” and Biden replied, “We’ve got to get it done. I need your help in getting it done.”

Wearing her signature black sneakers paired with formalwear, Secretary of the Interior Deb Haaland (Laguna Pueblo) contributed opening and closing remarks on Wednesday. She stressed the outsized funding that the current administration has dedicated to Indian Country. Since taking office, the Biden-Harris administration has allocated $45 billion to tribal communities through the American Rescue Plan and Bipartisan Infrastructure Law— more than 15 years’ worth of BIA budget in less than two years, Haaland said.

She also announced the first-ever oral history project that will collect testimonies from boarding school survivors.

“This has never been ever taken by the United States government and is a resource that I know many of you will have requested as part of your own work to document your own history,” Haaland said.

Finally, Vice President Kamala Harris delivered remarks in the afternoon. She received resounding applause at her mention of the Indian Child Welfare Act (ICWA), a 1978 U.S. federal law currently under attack that governs jurisdiction over the removal of Native American children from their families in adoption and foster care cases.

“Here’s what I know about ICWA: It was crafted to address systemic injustice,” Harris said. “For centuries, Native children were torn away from their families and their communities. These acts were not only violations of basic human rights for those children and their families but also an attack on the very existence of tribal nations. I will tell you, as I stand here as Vice President, that President Biden and I remain determined to work with you with Native leaders to safeguard the protections of ICWA.”

On Thursday, the summit will convene again and focus on investing in Indian Country, health equity, public safety, and Indigenous knowledge. Attorney General Merrick Garland from the Department of Justice and Director Shalanda Young of the White House Office of Management and Budge are expected to deliver remarks.