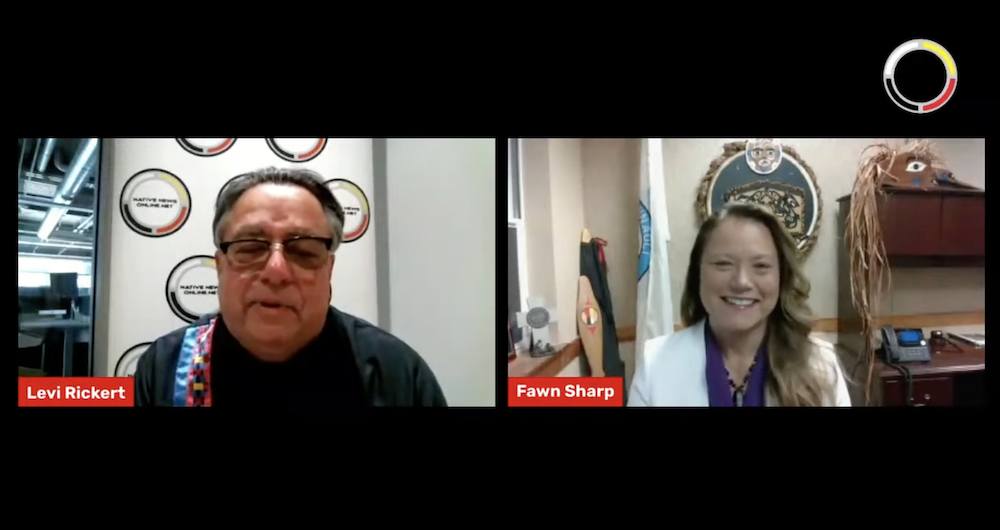 Sharp, who also serves as vice chair of the Quinault Indian Nation, is currently serving her second term as president of NCAI, the nation’s largest Native American organization, based in Washington, D.C.

In speaking about advancements in Indian Country last year, Sharp cited the approval of advance appropriations for health care; the appointment Mohegan of Chief Marilynn “Lynn” Malerba as treasurer of the United States; the provision with the Violence Against Women Act reauthorization that restores elements of tribal criminal jurisdiction over non-Indians who commit crimes on our reservations; and economic development.

During the interview, Rickert asked Sharp questions on different topics:

The “Brackeen v. Haaland” case was argued in November before the U.S. Supreme Court that deals with the Indian Child Welfare Act and, ultimately, tribal sovereignty. Do you have a prediction on the outcome?

“It’s going to be a close one. I believe that regardless of the decision, tribal nations, we know that we have an absolute inherent right to make a decision with respect to our children and the future of our children and the rightful place that they have within tribal nations. I want to say we’re going to win. I believe that just hearing some of the arguments and what some of the justices said, we’re convinced that the political relationship side may be favorable.”

After years of trying to get advance appropriations for healthcare passed in federal budgets, it passed this year. Why now?

“It was a combination of a lot of things. If anything, the pandemic revealed just how vulnerable tribal nations are, just how vulnerable we are when we don’t have the funding and the resources to protect basic things like quality of healthcare, like access to healthcare, and our ability to plan for the health needs of our citizens. We have the highest rates of infection and the highest rates of death.

“People were looking around and asking why tribal citizens and tribal nations are suffering at such high and disproportionate levels.

“I think it was just a lot of the things that we’ve been working on in advancing a perfect storm of a global pandemic.”

Tell us why you embarked on the 1,700-mile Sovereignty Run from Oklahoma to California.

“I knew Oklahoma was ground zero, and we had to enlist the voice of all of Indian Country to come together to ground zero of tribal sovereignty attacks. And we wanted to run across the country, elevating the issue and then arrive at the opening of our NCAI annual convention in Sacramento, which we did in ... I can’t even begin to express in words this year’s spiritual journey.

“It was a way to unite all of Indian Country together to stand for tribal sovereignty. There were so many memories along the way, not just personally but as well as professionally — it was an experience we’ll never forget.”

Watch the episode on our YouTube channel, or view in the embedded video below.