ATLANTA — The two Georgia runoff senate races that can decide which political party controls the U.S. Senate had the misappropriation of Native-themed images issue injected into the campaigns earlier this week.

Loeffler and Perdue released a statement on Monday declaring their opposition to any potential renaming of the Atlanta Braves.

Attempting to capitalize on the issue, the senators’ statement came after it was announced on Sunday the Cleveland Major League Baseball (MLB) team will drop its “Indians” name at some point in the near future after American Indian groups urged the misappropriation of the name for decades.

"We adamantly oppose any effort to rename the Atlanta Braves, one of our state's most storied and successful sports franchises," they said Monday. "Not only are the Braves a Georgia institution – with a history spanning 54 years in Atlanta – they're an American institution. The Braves’ name honors our nation’s Native American heritage, which should not be erased – and under no circumstances should one of the most celebrated teams in sports cave to the demands of the cancel culture and the radical left.” 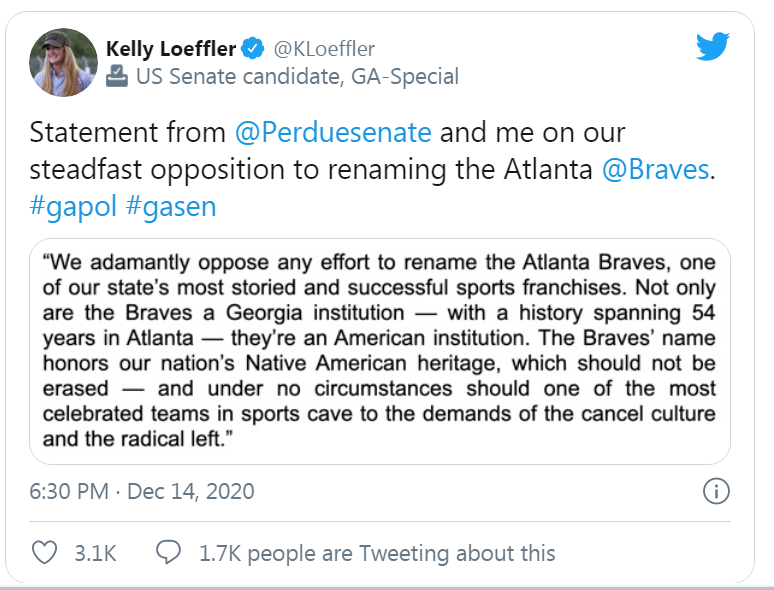 Loeffler and Perdue, who are both running anti-Democratic “socialism” campaigns, feel injecting the possible name change of the Atlantic Braves will hit home with their base of voters.

While the senators maintain using the Braves name honors Native Americans, the vast majority of Americans oppose the misappropriation of Native-themed images in sports.

According to the Reclaiming Native Truth project released in June 2018, four out of five American Indians say they find Native-themed mascots disrespectful. There is a basis for American Indian opposition that goes beyond the racist nature of mascots:

“Research shows that these mascots are damaging to Native high school and college students, negatively impacting feelings of personal and community worth, and that they reinforce bias among non-Native people,” says the Reclaiming Native Truth study.

“Oh no! What is going on? This is not good news, even for ‘Indians’. Cancel culture at work!,” he wrote.

Early voting for the Jan. 6, 2021 runoff election is already underway.