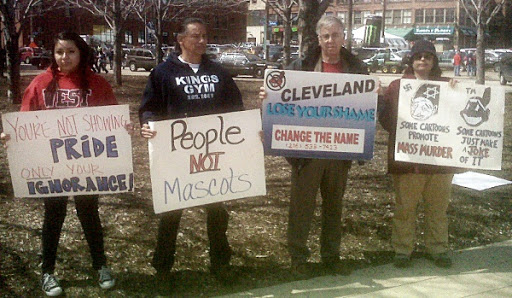 CLEVELAND — In what looks as if two victories in one year for American Indians opposed to the misappropriation of Native-themed images, The New York Times reported on Sunday night the Cleveland Major League Baseball (MLB) team will drop its name. In July, the Washington Football Team dropped its racist name.

An excerpt from The New York Times article:

"Following years of protests from fans and Native American groups, the Cleveland Indians have decided to change their team name, movin away from a moniker that has long been criticized as racist, three people familiar with the decision said Sunday.

The move follows a decision by the Washington Football Team of the N.F.L. in July to stop using a name long considered a racial slur, and is part of a larger national conversation about race that magnified this year amid protests of systemic racism and police violence.

Cleveland could announce its plans as soon as this week, according to the three people, who spoke on condition of anonymity because they were not authorized to speak publicly on the matter."

The fight to have the "Indians" name dropped by the Cleveland baseball franchise started over 50 years ago by the Cleveland American Indian Movement (AIM) in response to the wishes of the local Native community, elders and leaders in the Nations, according the the organization's website.

"I am not quite sure who the Native groups are that are mentioned in The New York Times artcle. The franchise has not reached out to us. And, we have been on the front line protesting this for a half-century," Cleveland AIM Executive Director Sundance said to Native News Online on Sunday night. "We are pretty connected and we have not heard of one Native group the team has talked to about this. Right now, it is all speculation on what is going to happen."

Editor's Note: This is a developing story and will be updated when an official announcement is made by the Cleveland MLB team.