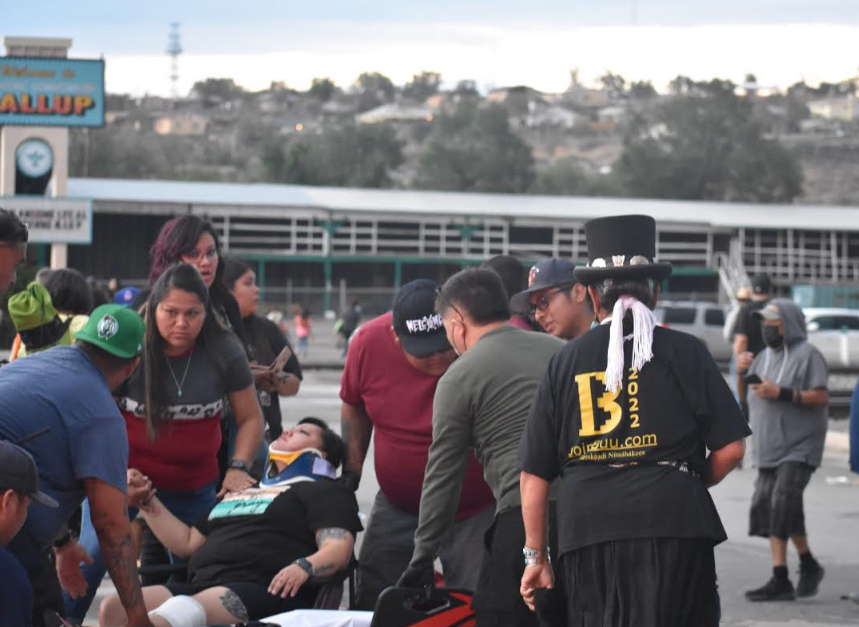 Update 11:30am EST: A Gallup city spokesperson has confirmed that three suspects were in the vehicle that drove through the parade. All three have been detained and names have not been released, but multiple sources have shared with Native News Online that all suspects are American Indian.

Breaking News. On a night that was meant for celebration turned into chaos at the kickoff of 100th annual Gallup Inter-tribal Ceremonial parade in downtown Gallup, New Mexico on Thursday evening when a truck aimed for the crowd of people.

He said the truck came out of nowhere moments after Navajo Nation President Jonathon Nez appeared during the parade and ended with a stand-off at a nearby jewelry store, Red Shell Jewelry.

“People were screaming,” Hawk-Birdshead said of the incident Thursday night. “It was horrifying to witness. I can’t imagine the trauma this has caused for the people.”

KOAT reported that the City of Gallup said no spectators or parade participants have been hit by the vehicle. However, reports to Native News Online, show scenes of people injured and taken by ambulance. Native News Online has not confirmed the truck struck any parade attendees, but the truck aiming towards parade attendees may have caused a crowd commition that attributed to chaos that resulted in injuries.

Multiple sources, including the New Mexico State Police, reported there were several people injured, including two members of law enforcement.

"Navajo Nation President Jonathan Nez asks for prayers this evening after a vehicle drove through the Gallup Intertribal Ceremonial Parade this evening in downtown Gallup.

According to KOAT, The driver and two others inside the vehicle that drove into the parade were apprehended several blocks down the parade route.

Almost half of the city of Gallup's population is Native American

Gallup is a border town to the Navajo Nation. Almost half of its residents are Native American (47.7 percent).

This is a breaking news story and will be updated as more information becomes available.