OLYMPIA, Wash. — Washington State Supreme Court Justice Raquel Montoya-Lewis, a tribal citizen of the Pueblo of Isleta of New Mexico, is running to retain her seat on the state’s highest court in the general election on Nov. 3. 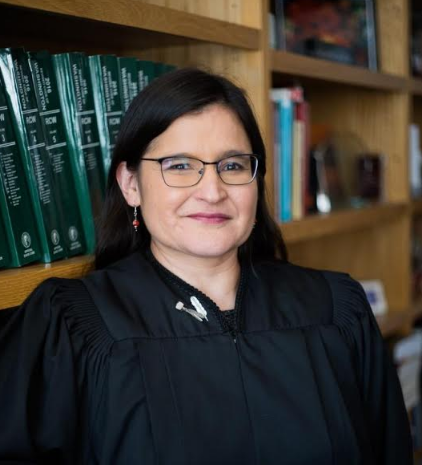 Appointed by Washington Gov. Jay Inslee, Montoya-Lewis was sworn in on January 6, 2020 and must run in the election to retain her seat for a full-term. The other candidate running for the seat is Dave Larson, who has served as a judge on the Federal Way (Wash.) Municipal Court for more than a decade.

Montoya-Lewis is only the second American Indian to serve on a state Supreme Court in the country. Prior to her selection by Inslee, Montoya-Lewis served five years on the Whatcom County Superior Court.

Montoya-Lewis is a graduate of the University of New Mexico and the University of Washington School of Law and the Graduate School of Social Work. She lives with her family in Olympia, having recently relocated after living in Bellingham for 17 years.

Justice Montoya-Lewis has earned an extensive list of endorsements, including each of her colleagues on the Washington State Supreme Court, the Jamestown S’Klallam Tribe, Port Gamble S’Klallam Tribe, Confederated Tribes and Bands of the Yakama Nation, and Spokane Tribe of Indians, as well as Indigenous leaders across Washington state.

“Representation matters. Having a voice at the table – and on the bench – for Native American communities, and other underrepresented communities, will ensure a thoughtful review of the issues at hand, now and in the future,” Justice Montoya-Lewis said. “Much of my work has centered on equity, implicit bias, and cultural identity. I will continue to bring those lenses to our work on the Supreme Court as we seek to ensure fair and just outcomes for all Washingtonians.”

Tribes and Indigenous leaders in Washington are lining up to support Justice Montoya-Lewis.

The Confederated Tribes and Bands of the Yakama Nation issued an endorsement statement, saying that Justice Montoya-Lewis “has the legal mind and acumen needed for the job, but more importantly she has the heart and compassion that our society needs from state judges.”

Spokane Tribe of Indians Chairwoman Carol Evans said that Justice Montoya-Lewis “represents equality and justice for all” and calls her “a strong advocate for our youth.”  The Spokane Tribe, in its endorsement of Justice Montoya-Lewis, cited her local and national work in juvenile justice as proof of her “comprehensive understanding of issues affecting Indigenous peoples.”

“Tribes have fought for years to get American Indians appointed and elected to the judicial system, from local to state to federal levels. Indian Country must fully support Justice Montoya-Lewis to stay on the Washington State Supreme Court.  It is an opportunity we must win,” says Jamestown S’Klallam Chairman and CEO W. Ron Allen.

According to Seattle City Councilwoman Debora Juarez, who was Washington state’s first Native American Superior Court judge: “Indigenous women are the North Star in our tribal communities. Justice Montoya-Lewis’ power and presence on our state's highest court cannot be understated or denied. She is now the North Star that all Washingtonians—especially our women and daughters—can gaze up at in search of justice and hope.”

Justice Montoya-Lewis, who has also served as Chief Judge for the Lummi, Nooksack, and Upper Skagit Indian Tribes, is an unyielding advocate for communities systemically marginalized by the criminal justice system. She has led training addressing implicit bias across the state and has centered racial inequality as a fundamental part of her daily work. She is a strong advocate for making courts more accessible to all communities.

“Justice must be accessible to those who have to or wish to seek it,” said Montoya-Lewis. “This is a significant priority to me as a judge who has seen firsthand how inaccessible the legal system is to so many. It is my goal to ensure there are open channels to justice that are not impeded by cost.”