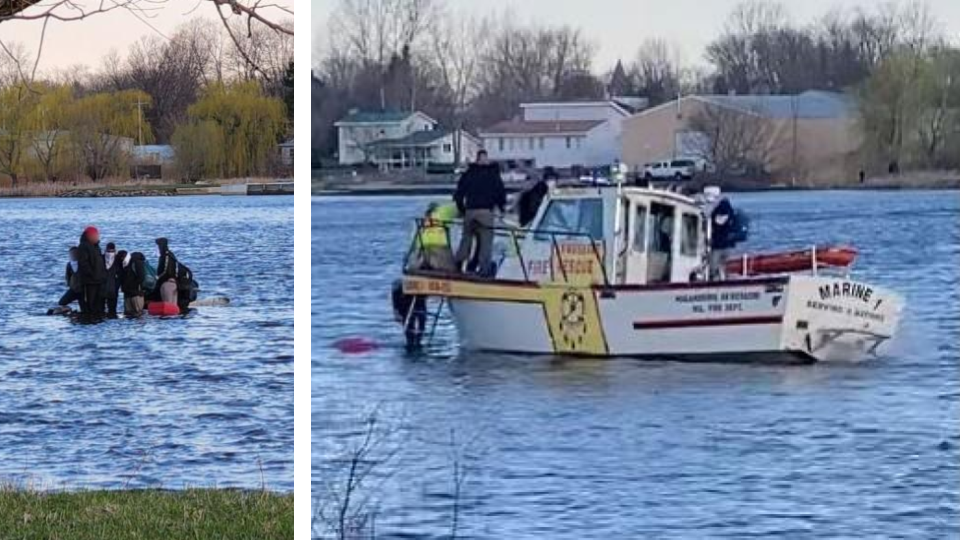 In late April, the Saint Regis Mohawk Tribal Police, tipped by U.S. Border Patrol agents, rescued and detained six Indian nationals in a sinking boat as they attempted to illegally enter the United States from Canada.

Their smuggler, a U.S. citizen, swam to shore and abandoned his passengers, who were unable to swim and without life jackets in water temperatures just above freezing, according to the complaint filed with the US District Court for the Northern District of New York.

“We were going to die, police saved us,” one of the people aboard the boat told a border patrol agent, documents show.

The rescue and capture of the six citizens of India ​began when the Akwesasne Mohawk Police Service in Quebec reported to their relatives at the Saint Regis Mohawk Tribal Police Department in New York of “suspicious activity” of a boat holding multiple people traveling from Cornwall, Ontario, Canada, toward the United States border.

The Saint Regis Mohawk Tribal Police Department responded and “observed the vessel taking on water and sinking in the Saint Regis River in Akwesasne,” according to the tribe’s press release.

In coordination with the police and volunteer fire department, the six Indian nationals ranging from 19 to 21 years old were taken to shore and given medical examinations for hypothermia.

Once cleared, they were arrested by Border Patrol agents and charged with ‘Improper Entry by Alien.’ They were held for a month at a local jail near Plattsburgh, New York, pending their May 24 court appearance, according to a spokesperson for the local US Attorney’s office, Michael Barnett. All six people were assigned legal counsel, pleaded guilty, and were transferred to immigration proceedings.

Their smuggler, identified in the complaint as U.S. citizen Brian Lazore, was charged with ‘alien smuggling,’ a felony that is punishable by up to 10 years in prison for each violation. He is currently being held in jail awaiting his trial, spokesperson Michael Barnett told Native News Online.  Lazore reportedly knew that his passengers could not swim. His defense attorney, Gabrielle DiBella, told the Associated Press that Lazore is “presumed to be innocent until proven guilty.”

“The smuggling of illegal immigrants has been an ongoing issue for many years,” said Rourke, who has served in his position for two and a half decades. “This just happened to be a localized incident that could have been tragic, but smuggling happens throughout the northern border.”

Illegal entrance attempts across the Northern U.S. land border have steadily risen over the last three years. In just the first five months of the fiscal year, there have been 37,931 attempts, or more attempts than in the entire last year combined. By comparison, Southwest land border encounters are already over a million for the same time period this year.

The month of April accounted for the most attempts made in any single month at the Northern US land border over the last three years, at 7,813 attempts to enter the United States. Of those attempts, about 60 percent took place in New York.

The closest port of entry to the incident last month is in Massena, New York—14 miles east of Saint Regis— and one of 13 ports of entry in New York state alone, though a spokesperson from border patrol said most entry encounters happened between ports.

Rourke said that immigration isn’t a common issue for local police departments to take on, but the Tribe works to support the Massena Border Patrol Station.

He also added that people who are trying to enter the United States are coming from third world countries all over the world, “trying to come over for a better life.”

“We don't know what they're running from,” Rourke said. He added that human smugglers often don’t care about the safety of the people in their care.

“In some of these illegal smuggling operations, (smugglers) take advantage of someone …and we feel bad for them, but we also have a job to do because it is a felony to cross the border illegally,” Rourke said.

South Asian Americans Leading Together (SAALT) executive director [email protected]";,"type":"person"}">Lakshmi Sridaran told Native News Online that her organization is working to understand country conditions that are forcing people from South Asia to migrate to the United States or elsewhere.

SAALT is an organization focused on racial justice advocacy beginning in the wake of the September 11 terrorist attack, though they’ve since taken on immigration justirce as a priority, as well, Sridaran said.

“Mainstream news often characterizes (incentives) as economic migration,” Sridaran said,  which overlooks a whole host of considerations. She said that SAALT’s analysis has found that those who are most likely to immigrate from India are those who are oppressed by caste, religion, or political party affiliation— “because all of those communities are being targeted and marginalized by the government in India in particular.”

Sridaran added that the topic of human trafficking often criminalizes the act of migration rather than focusing on why there aren’t safer pathways for immigrants to come to the United States.

“That's not to say that people are not specifically recruited and exploited for their labor,” she said. “But it is very different from (a smuggler) bringing a family or a set of people. That kind of trafficking feels different, and that's what I think often gets criminalized. The focus becomes on the smuggling of immigrants rather than: why are there not better broadways for people to come here?”