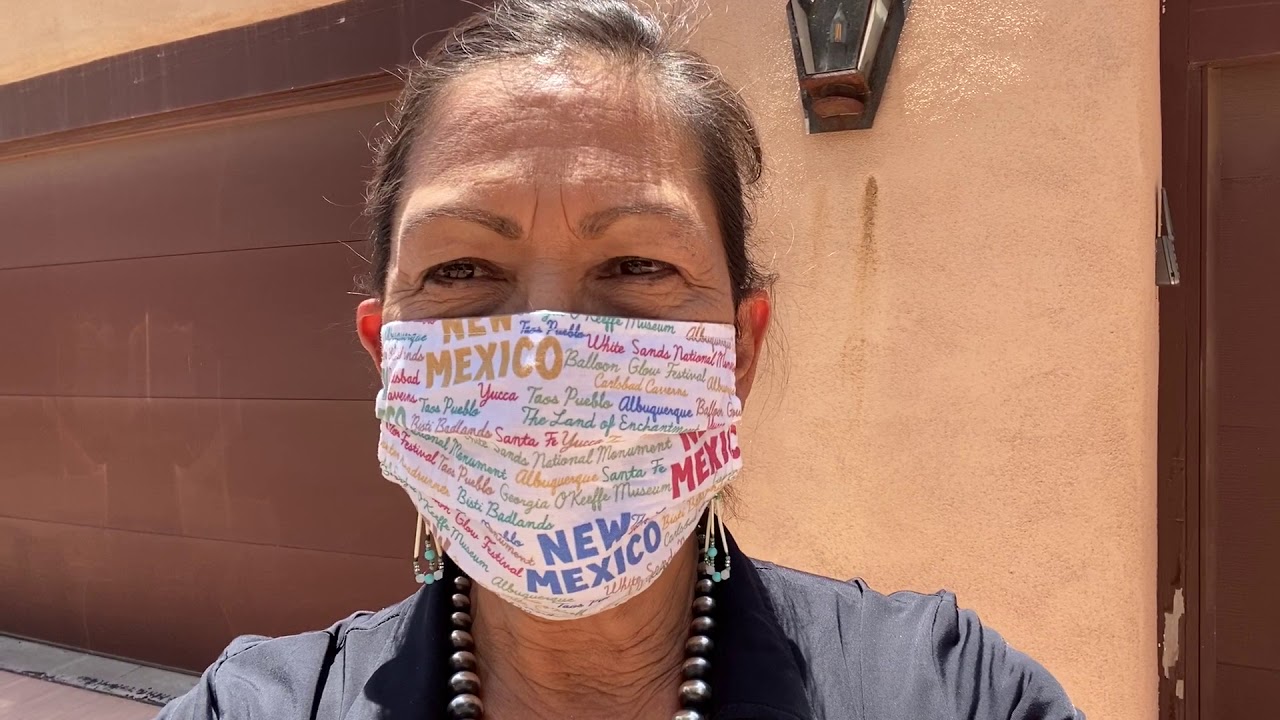 Congresswoman Deb Haaland (Pueblo of Laguna) received her second shot of the Pfizer-BioNTech COVID-19 vaccine, caught in a video posted to her official Facebook page on Jan. 11.

Donning a facemask emblazoned with the New Mexican flag, Haaland speaks to the camera: “Okay guys, I’m getting my vaccine and it’s totally fine,” she said. “I hope that you’ll get yours too when it’s time.”

The congresswoman added a thanks to health care professionals working to prevent the spread of the virus.

Vaccinations became available to lawmakers just before Christmas, after an emergency approval by the Food and Drug Administration to roll out the innoculations amid a mounting national caseload. All members of Congress and staff whose onsite presence is required were encouraged to schedule vaccination appointments through the Office of the Attending Physician.

“My recommendation to you is absolutely unequivocal: there is no reason why you should defer receiving this vaccine,” Attending Physician Brian P. Monahan said in a letter sent to all Congress members and staff Dec. 28. “The benefit far exceeds any small risk.”

Among the first to be vaccinated were Speaker Nancy Pelosi and Senate Majority Leader Mitch McConnell, who each shared photos of themselves receiving the vaccines on Dec. 15.

Among the five other Native members of Congress, two of them have confirmed publicly that they've received inoculations against Covid-19.

State Rep. Georgene Louis of New Mexico (Pueblo of Acoma) told Native News Online that she received her first dose of the Covid-19 vaccine weeks ago, though not without a bit of internal struggle.

“It was a challenging decision for me simply because I understand that there are still some health care workers and folks with pre-existing health conditions that haven't received it yet,” Louis said. “I also hate needles. However, I decided that showing people that I trust the science behind the vaccine might reduce some of the anxiety and uncertainty that elders might have about receiving it. We need them vaccinated because they are the backbone of our tribal communities.”

Apart from a sore arm the following day, Louis said she had no reactions.

Congressman Tom Cole of Oklahoma (Chickasaw Nation) released a statement Dec. 21 after receiving the first two doses of the vaccine.

“At the recommendation of the Office of the Attending Physician and to demonstrate my total confidence in this vaccine, I received my first dose over the weekend,” Cole said. “While vaccinations are a personal decision, defeating this terrible coronavirus is a war we must fight and win together. We can all do our part by taking the vaccine as soon as it becomes available to us all.”

Rep. Sharice Davids of Kansas (Ho-Chunk Nation) received her first dose of the inoculation Jan. 5, “in accordance with government continuity guidelines” she posted on Twitter.

Six lawmakers on both sides of the aisle—including Ilhan Omar of Minnesota and Rand Paul of Kentucky—have publicly refused Covid-19 vaccines until all health care workers and seniors have the chance to be vaccinated.

“People who need it most, should get it,” Omar wrote on Twitter. “It would [sic] makes sense if it was age, but unfortunately it’s of importance and [sic] its shameful.”

The national rollout of Covid-19 inoculations is phased in order of those deemed most vulnerable by the Center for Disease Control (CDC) and state officials. Though criteria differs state to state, most states have completed Phase 1a, inoculating health care professionals, first responders, some essential workers and long term care patients, and are transitioning this week to begin distributing the vaccine to seniors, teachers, public transit workers and other essential workers.