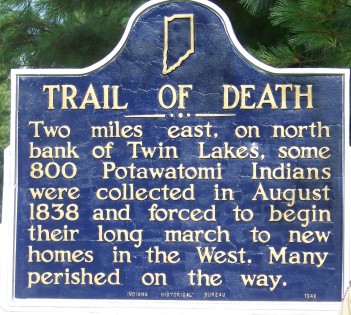 The forced removal is known as the “Potawatomi Trail of Death” because over the course of 61 days in 1838, 40 Potawatomi died along the long and harsh journey.

Part of the resolution reads:

“The Potawatomi people, collectively known as the ‘‘Potawatomi Nation’’, are comprised of members of the many villages, communities, and bands that resided in their homeland in the southern Great Lakes region of the present day States of Ohio, Indiana, Michigan, Illinois, and Wisconsin. Their advanced farming techniques, extensive trade and commerce networks, and well-established transportation routes of the Potawatomi Nation had a significant influence on the early history of North America”

“The Senate resolution being sponsored by Senator Young acknowledges a profound historical tragedy suffered by Potawatomi people that has deeply affected Potawatomi through the generations and to the present day,” said Pokagon Band of Potawatomi Chairman Matt Wesaw. “We want to express our deep gratitude to Senator Young for opening a dialogue with the Pokagon Band on this important subject, and we also want to thank Senator Stabenow and Senator Peters for stepping forward to co-sponsor this important resolution.”

It is purely done to recognize the injustice done to the Potawatomi during the time of removal in United States history.