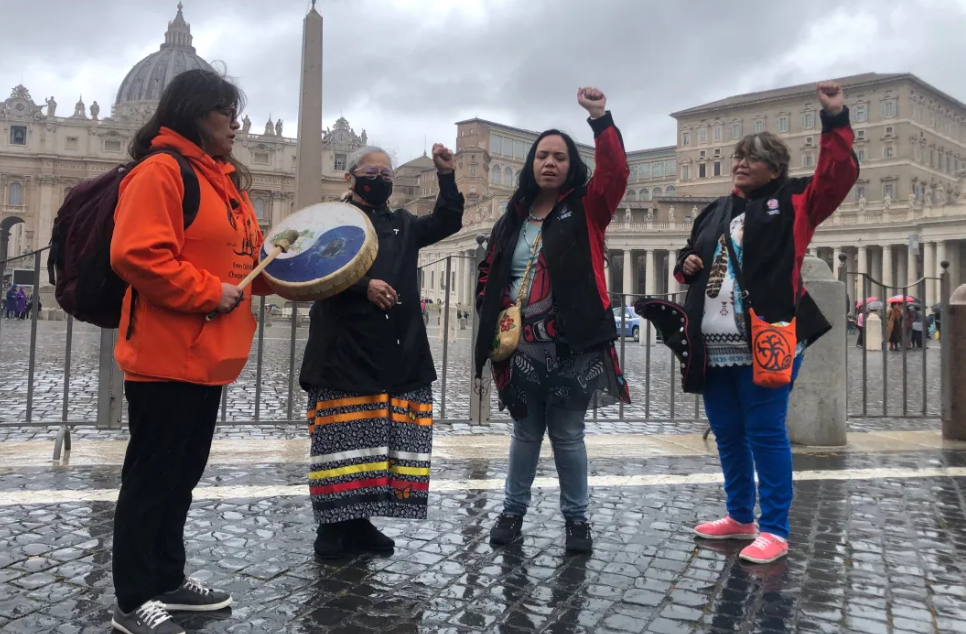 For the first time in history, the leader of the Catholic Church in Vatican City, Rome, on Friday acknowledged the role of the church in perpetrating harm on the more than 150,000 First Nations, Inuit and Métis children sent to residential schools in Canada.

For over a century, Indigenous children in Canada were forcibly removed from their families to attend boarding schools meant to strip them of their language, culture, and self.

At the schools, children were often physically and sexually abused, according to testimony from residential school survivors taken by Canada’s Truth and Reconciliation Commission between 2007 and 2015.

In just the last nine months, over 1,400 Indigenous childrens’ interred remains have been located, buried at the sites of former residential schools where kids often died of disease, neglect, and abuse. The Catholic Church was responsible for running nearly 75 percent of the 130 residential schools operateed across Canada.

“It's chilling to think of determined effort to instill a sense of inferiority to rob people of their cultural identity, to sever their roots, and to consider all the personal and social efforts that this continues to entail: Unresolved traumas that have become intergenerational trauma,” Pope Francis addressed the Canadian Indigenous delegation of close to 100 people that traveled to Italy to ask for an apology this week. “All this made me feel two things very strongly: indignation and shame.”

The apology comes at the end of a week of meetings with the Canadian Indigenous delegation of First Nations, Inuit, and Metis residential school survivors. The meetings were scheduled since last June, twice delayed by Covid-19, and intended for work towards truth and healing.

A key tenant of that truth and healing has been the ongoing demand for an apology.

In June, in response to the discovery of the remains of 215 Indigenous children in unmarked graves at a former Catholic-run Indian residential school site in Kamloops, British Columbia, the Pope expressed “sorrow” “about the shocking discovery,” though his response fell short of culpability.

Leaders from the First Nations, Inuit and Métis Indigenous delegation said in a press conference that they felt heard and moved by Pope Francis’ caring and empathic response.

Still, they said, an apology is part of a much larger picture in the path towards reconciliation.

“We keep talking about the apology, but we've all been very clear that there are so many steps that we still have to take,” said Métis National Council President, Cassidy Caron. “We look forward to when the Pope visits and delivers a similar, if not stronger message, when he does arrive to our communities. He was so moved by just those thirty people (he met with this week) that he felt compelled to deliver this apology. Just imagine what he's going to feel when he comes to our homelands and meets with our people, sees our communities, (and) perhaps visits some of the residential schools that still stand for us.”