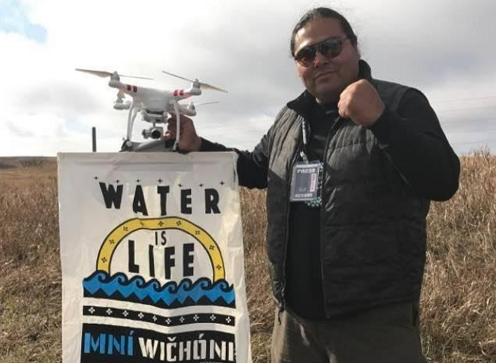 Some nine months after the accidental death of award-winning filmmaker and journalist Myron Dewey (Walker River Paiute Tribe), a Nevada man has been charged with two counts that resulted in the untimely death of Dewey, who was only 49 when he passed away.

On July 13, the Nye County District Attorney’s Office charged John Walsh, of Reno, Nevada with "Driving Under of the Influence Resulting in Death" and “Reckless Driving Resulting in Death." If convicted, Walsh faces up to 20 years in state prison.

“I am glad to see justice being served for the survivors of Myron Dewey’s family,” said Walker River Paiute Chairman Amber Torres to Native News Online. “I am thankful for the follow through of the Nye County Sheriff’s Department based on the evidence as well as the persistence of the family to make sure that their loved one could rest peacefully knowing they used their strong voices in his honor.”

According to multiple news sources in Nevada, Walsh had "levels of cannabinoids" in his blood tests after he was taken to the hospital for injuries resulting in the car accident, but for some reason his tests were overlooked and the Nye County Sheriff’s Department closed the case.

However, Myron’s family was persistent and continued to pressure law enforcement to further investigate the accident.

According to News 4, after the accident Dewey was alive between two to three hours before he passed away after Walsh hit Dewey head-on on a rural dirt road in Nye County.

Dewey had more than 20 years experience working to bridge the digital divide in media and technology throughout Indian Country, both as an educator and technology expert building technology infrastructures. He founded Digital Smoke Signals, a media production company that shared live frontline footage during the 2016 demonstrations against the Dakota Access Pipeline (DAPL) near the Standing Rock Indian Reservation in North Dakota.

Dewey co-directed the award-winning 2017 film Awake: A Dream from Standing Rock, which tells the story of the Indigenous-led, peaceful resistance and fight for clean water, the environment, and the future of the planet during one of the largest protest encampments in American history. His drone footage of the DAPL protests garnered recognition for the cause and elevated his status as a journalist covering environmental and Indigenous issues. In 2021, he was a visiting professor at Duke University, teaching rogue journalism at the Center for Documentary Studies.

Walsh is charged with two crimes resulting in the death of Myron Dewey and can only be convicted of one. The more serious charge, Driving Under the Influence Resulting in Death, is a category “B” Felony crime in the state of Nevada and is punishable by imprisonment between a minimum of 2 years and a maximum of 20 years in the Nevada State Prison. In the lesser charge, “Reckless Driving Resulting in Death,” Walsh faces imprisonment between one and six years in prison and between $2,000 and $5,000 in fines. Reckless driving causing death in Nevada is when a person’s extremely careless and risky driving results in another person being killed and the driver was not under the influence of alcohol or drugs.

According to the Nye County Sheriff’s Department, Walsh is not in custody at the Nye County Detention Center. His next court appearance is in September.

“If he [Dewey] were here he would be proud,” said Torres. “A lot of times, reopening a case doesn’t happen in Indian Country. I hope they can start to heal with a sense of closure.”