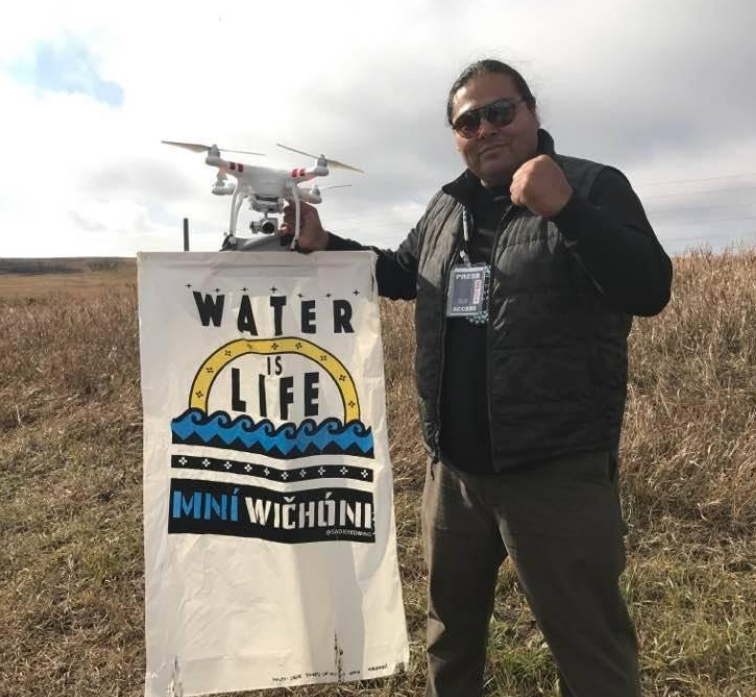 YOMBA, Nev. — Myron Dewey, a filmmaker, professor and journalist, passed away in a fatal car accident early Sunday morning in Yomba, Nev., sources confirmed to Native News Online. He was 49.

[This story has been updated to include details of the memorial services for Myron Dewey.  See below.]

Dewey founded  Digital Smoke Signals, a media production company that shared live frontline footage during the 2016 protests against the Dakota Access Pipeline (DAPL) near the Standing Rock Indian Reservation in North Dakota. His drone footage of the DAPL protests garnered recognition for the cause and elevated his status as a journalist covering environmental and Indigenous issues.

Dewey was one of several Native American journalists arrested while covering the Standing Rock resistance and faced a class A misdemeanor charge related to his use of the drone. He faced up to a year imprisonment and $2,000 fine. The charge was eventually dropped.

“The world lost a dedicated water protector and digital warrior with the death of Myron Dewey,” Environmental Indigenous Network Organizer Dallas Goldtooth told Native News Online. “His efforts to defend the sacred and protect the water from ecological destruction will always be cherished and remembered. Our movement was stronger with him, and now we move forward mourning our loss.”

Dewey received numerous awards for his journalism and media production, including the Michelle Moor Award for Community Journalism and the Man of the Year Award from Medicine Winds News. In 2018, he was given an Award of Merit by the University of Kansas Department of Film & Media Studies. In 2017, he was a winner of the New York City Drone Film Festival in the category of News/Documentary for a short film monitoring North Dakota police at the NoDAPL protest site. Dewey also co-directed the award-winning 2017 film Awake: A Dream from Standing Rock, which tells the story of the native-led peaceful resistance and fight for clean water, the environment, and the future of the planet on the Standing Rock Indian Reservation.

Dewey is Shoshone and Pauite from the Pyramid Lake Paiute Reservation, 35 miles northeast of Reno. He leaves behind a three children and six grandchildren.

“He is loved throughout Indian Country, as well as internationally, for his stance on Indigenous rights and protection of our sacred land and waters,” said Deborah Parker, the mother of Dewey's 11-year old son, in a statement on social media. “He loves sunrises and sunsets and captured the beauty of our earth almost daily.”

“He loved his people. He loved our lands. He fought harder than anyone I know. He never stopped. He wanted to do all he could to serve and protect his people. He did it with a full heart,” Parker added.

Dewey spent more than 20 years experience working to bridge the digital divide in media and technology throughout Indian Country, both as an educator and technology expert building technology infrastructures. He was most recently a visiting professor at Duke University, teaching rogue journalism at the Center for Documentary Studies.

“We lost a giant, a visionary, a bridge between the ancient and the changing reality of technologized indigeneity,” Lakota People’s Law Project Lead Counsel Chase Iron Eyes told Native News Online. “Myron empowered everyone around him to speak their truths and tell their stories; he teaches us the spirit must speak through any channels which come our way, our voices must bring us through. He had big dreams for Indigenous nations, that path is on us to carry on in his strength.”

Funeral Services will be held at the Walker River Gym, 1127 Cotton Wood Drive, Schurz, Nev. 89427 with a Water Protector escort from Gym to Cemetery. Traditional dinner to follow.