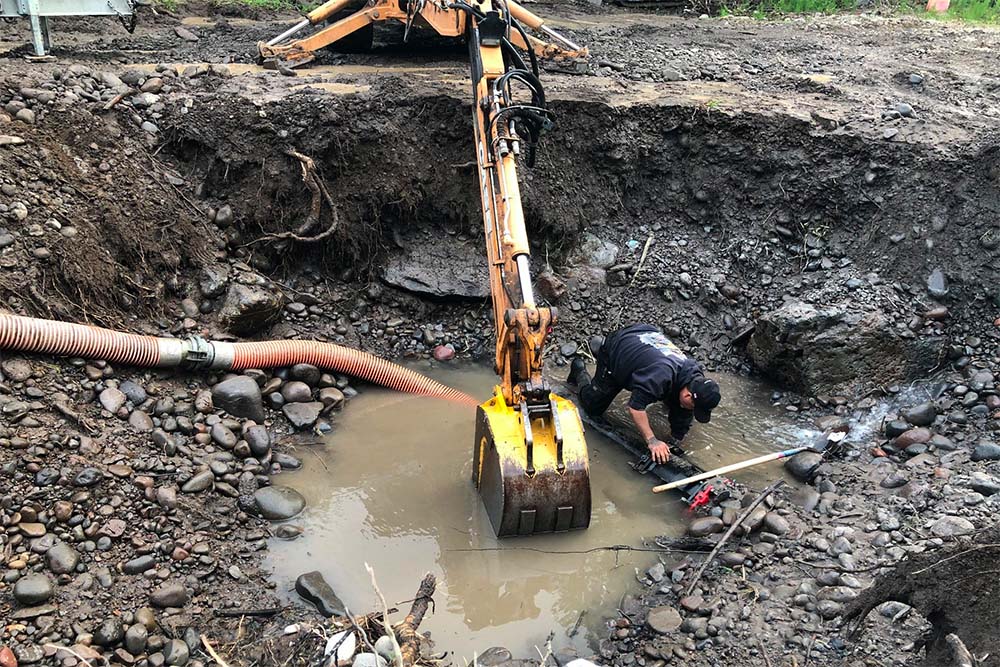 WARM SPRINGS, Ore. — As the globe recognized World Water Day last week, about 90 tribal residents on Warm Springs Indian Reservation in northern Oregon were without clean water for several weeks after an electrical failure in its pump system put a section of the tribe on a boil water notice.

Some sections of the 1,000-square-mile reservation — the largest in the state — have been on a boil water notice on and off since last January, but pipes have been failing since 2017, according to tribal Emergency Manager Dan Martinez.

“The water has and will be an issue out there for about another week or two until we can remedy the problem with the pumping system,” Martinez told Native News Online on March 25. Using emergency funding, the tribe rented outdoor showers and toilets, and brought in pallets of water and food for its impacted members. “But I think we still got three years of solving the water crisis.”

In another section of the reservation, water access has been limited since mid-January, when aging pipes broke, causing a groundswell of flooding.

Earl Hoptowit (Yakima), a laborer who has lived on the reservation since 2007, said he was out of water for three weeks in mid-January as a result of the busted pipes. During that time, the tribe followed a similar protocol of setting up free outdoor showers and restrooms in the village parking lot, while supplying residents with water. “We did the best that we could. You have to make due with what you got,” Hoptowit said. “I wasn't complaining, you know, (it’s) just one more thing that you have to do.”

The federal government’s Bureau of Indian Affairs (BIA) is obligated to provide Warm Springs with access to clean water under The Treaty of 1855 between the tribe and the U.S. government. But according to Martinez, the BIA consistently puts “Band-Aids” on the problem rather than replacing the whole water system.

“I don't want to put blame on the Bureau of Indian Affairs, but the fact remains that a lot of it is the infrastructure that's failing as a result of an aging system — probably from the 1930s when we had the boarding schools here on our reservation,” Martinez said. “It's never been updated. You got metal pipes that are going into copper pipes that are going into plastic pipes. When you combine all these materials into an aging system, something’s bound to give. We only put Band-Aids on the system, and then it fails, and it fails, and it freezes. And we've been at it since 2017.”

To replace the water system, Martinez said the appraised estimate is between $40 million to $200 million, depending on what needs to be replaced to bring the system up to standards. In the last three years, he has counted about 12 breaks that have impacted tribal residents. Additionally, Martinez said that the current water system draws from the Deschutes River, which is one of the dirtiest rivers in the state.

The Deschutes River is located in central Oregon. It’s under pressure from growth, according to the Department of Ecology at the University of Washington — “resulting in many small, uncontrolled sources of pollution that enter the river… In the Deschutes, water quality monitoring revealed that levels of pH, dissolved oxygen, temperature, fine sediment, and fecal coliform did not meet state standards.” In response, an advisory group made up of different stakeholders is developing a plan to clean the river.

“So even if we did fix everything, you still got a water treatment plant that sits in the worst river to be pumped out of as far as water consumption,” he said. “So the ideal is (to) relocate it. I think that’s where your $200 million projected costs comes in.”

Over the past year, the impact was compounded by Oregon’s record wildfire season that inched close to the reservation, and a global pandemic — both of which required water for basic safety. The tribe lost 22 members to Covid-19, some of which passed without access to clean water, Martinez said.

“I can't pinpoint any particular death to that, but I could tell you that some of the folks that did die, they were out of water,” Martinez said.

When five large wildfires broke out across the state over the summer, 70 percent of the population was without drinking water, and daily temperatures averaged 102 degrees, Martinez said. Close to 2,900 firefighters were on the reservation fighting wildfires, and the emergency response team was distributing about 17,000 gallons of water a day to local residents by hand.

A state philanthropic group, MRG Foundation, spearheaded the Chúush Fund in August 2019 — which means water in the local language — in response to the ongoing need for clean water on the reservation.

In February, Oregon Sens. Ron Wyden and Jeff Merkley introduced a bill to improve water quality. It came on the heels of the senators’ Western Tribal Water Infrastructure Act legislation, which aimed to move tribal communities out of the cycle of temporary and emergency fixes by allocating increased funding from $20 million to $50 million per year for infrastructure projects.

Enrolled tribal member Angela Xul-Zi-Yut Foster, who lives off the reservation but has family that’s impacted by the failing water infrastructure, said she started going up to Warm Springs in response to the wildfires, and continues visiting the community despite the pandemic.

“They’re just trying to survive out there, that’s mostly the focus,” she said. “I feel like they're just so used to it, that they're really desensitized about it. Like they already don't have a whole lot of means to do much out there, like not a whole lot of internet service. People have to drive down to the store to get internet, so there's not a whole lot that they can do about it.”

She said the visits inspired her to get involved in “the political side of things,” such as testifying in support of the legislators’ water bill. “We’re struggling so much and it’s very slow moving to get the government to do a damn thing, to even say that we’re struggling out loud,” she said. “My main goal in this is I really want the government to step forward and do what they said that they would do when they signed the treaty for our land.”