No Stimulus Checks Until After Election after Trump Calls Off HEROES Act 2.0 Talks

WASHINGTON — President Donald Trump, on his first full day back to the White House from Walter Reed National Military Medical Center where he was treated for Covid-19, abruptly broke off talks with congressional Democrats on the HEROES Act 2.0 that was approved by the Democratic-controlled House of Representatives last Thursday.

Trump announced he had ordered his representatives to stop Covid-19 stimulus talks with Democrats until after the election in a series of tweets Tuesday afternoon.

In a tweet, Trump said the biggest sticking point in the talks was the Democratic demand for aid to cash-strapped state and local governments, which are facing enormous shortfalls in their budgets because of the six-month Covid-19 pandemic.

Included in the House-passed HEROES Act 2.0 was an earmark of $9.5 billion for tribal governments. The breakdown of funds directed to tribes was:

Separate from the funds devoted to tribal, state or local governments was additional coronavirus response packages—or stimulus checks—which would have been $1,200 per adult and $500 for each dependent. With Trump’s announcement, there is no chance for these funds before the election.

Overall, theHEROES Act 2.0 was a stimulus package worth $2.4 trillion. The White House had offered a $1.6 trillion package. 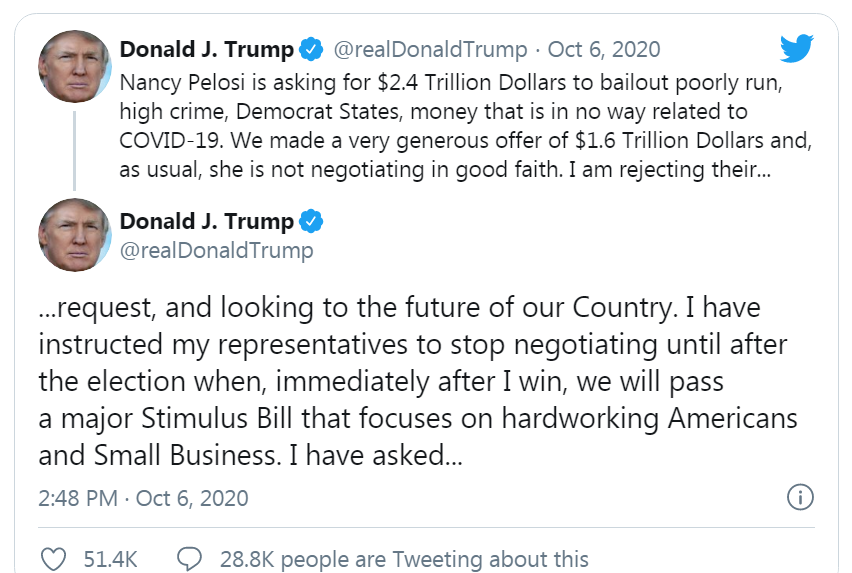 "President Trump showed his true colors: putting himself first at the expense of the country, with the full complicity of the GOP Members of Congress," Pelosi said in a statement. "Walking away from coronavirus talks demonstrates that President Trump is unwilling to crush the virus, as is required by the Heroes Act."