WASHINGTON — Equal pay disparities between women and men are even more apparent during the pandemic, especially for Native women who classify as essential workers. 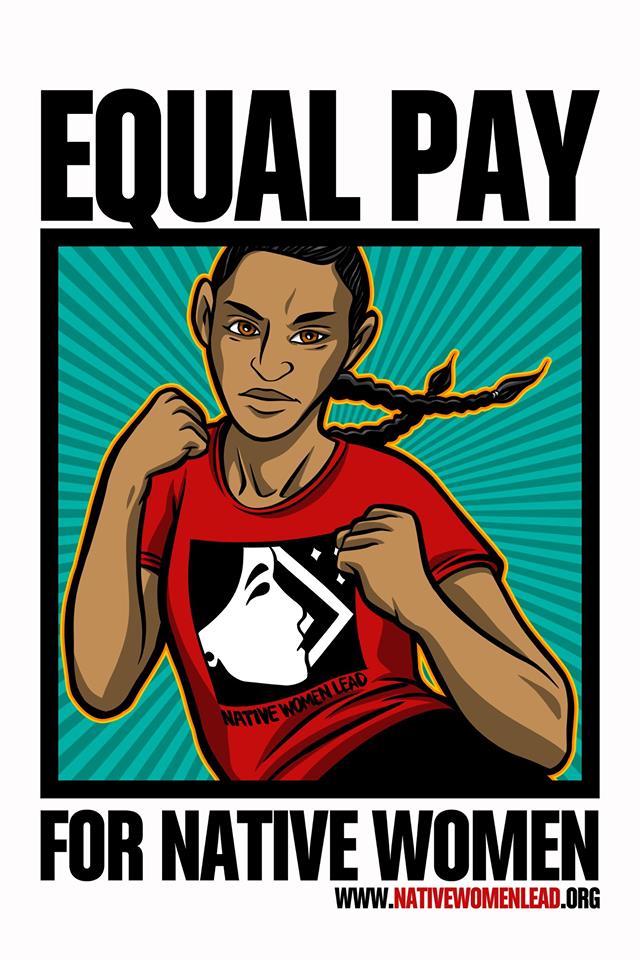 In late September, the National Women’s Law Center (NWLC) reported that three out of 10 Native women are considered front-line workers and earn under 60 cents for every dollar compared to their white, non-Hispanic male counterparts.

The report stated, “The pandemic has exposed how the work performed primarily by women has long been and continues to be undervalued, even as the rest of the country is depending on it as never before. Women are the majority of workers risking their lives to provide health care, child care, and other essential services, and Native American women are overrepresented in a variety of these occupations. They are also overrepresented in many of the occupations feeling the brunt of COVID-related job loss.”

NWLC reviewed the annual losses due to the wage gap for Native women in various occupations, such as retail workers, teachers, registered nurses, etc., with retail supervisors experiencing the highest disproportionate losses of $20,000. Overall, the average gap equates to approximately $2,055 lost every month. Native women would have to work 21 months to earn a comparable income that of white men who work for 12 months.

Tribal breakdowns compared the median salaries of Native women with those of white men ($60,350). Yaqui women, who earned $28,000, saw the most significant difference with 46.4 percent while Potawatomi women, who earned $50,000, closed some of the gap with 82.9 percent. 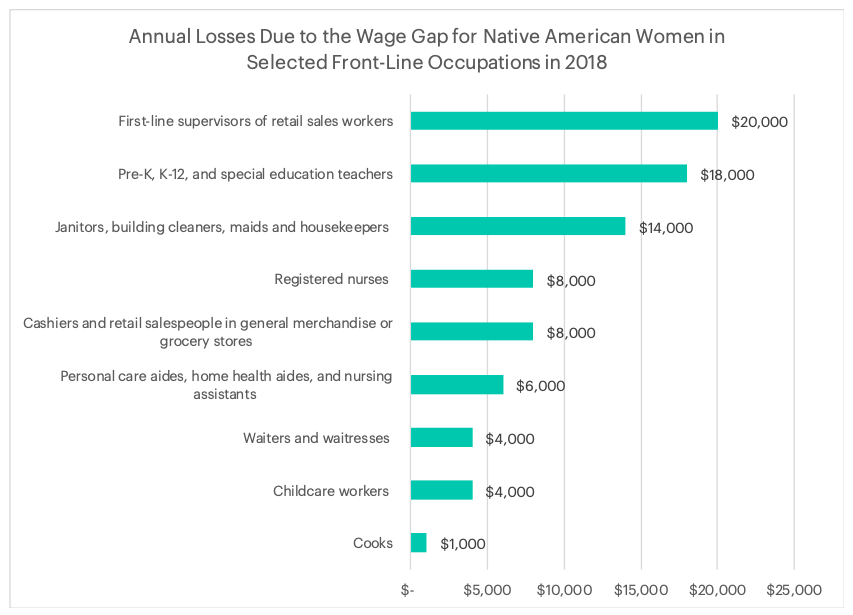 This all comes as no surprise to Kai TwoFeathers Orton, PhD (Inuinnait/Cree/Nimiipuu), who serves as the Senior Associate Director of Corporate and Foundation Relations at Dartmouth College. She is outspoken about wage disparities and recently participated in a Native Women Equal Pay 2020 panel discussion on Oct. 1..

“Right now, it is estimated that Native womxn (will) reach pay equity in 2119 if we stay the course. That is one and a half lifetimes beyond my own,” said TwoFeathers Orton, who believes Congress should revisit gender equal pay. 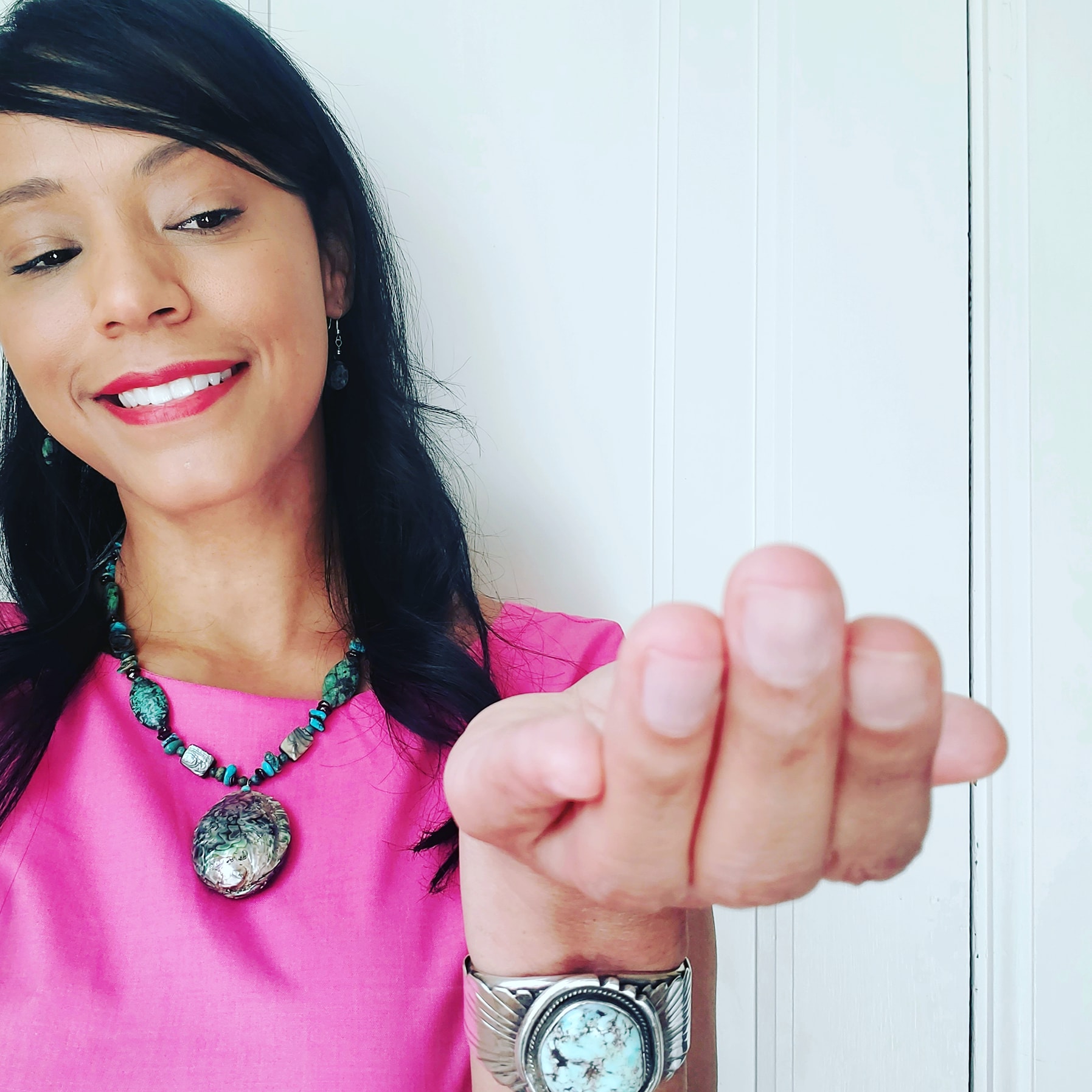 “When we look at the current stats our hearts should break, but we should also take this data and knowledge to make meaningful and appropriate policy changes to correct these disparities and ensure that they do so in the shortest time period.”

As a Google NextGen Tech Policy Fellow, TwoFeathers Orton focuses her work on STEM and computer science education by leading and collaborating on independent research projects with an emphasis on women and girls of color.

“As a Native woman with a PhD, still paying off student loans, these figures are really sobering and disappointing, but they also motivate me to become my own best advocate and one to others in my professional space,” TwoFeathers Orton remarked after acknowledging an even greater gap in higher education.

Over the years, she’s seen an increase of Native and POC womxn in the tech industry, which may be the result of employers diversifying their hires.

She claimed, “More employers are hiring DEI (diversity, equity and inclusion) leaders who are doing really hard work as well as some employers realizing they need diverse designers to combat implicit biases in the AI of their products, or because they realize they have a diverse customer base and it’s beneficial to them to invest in diversifying their talent and thus the product appeal and function.

“Unfortunately, I also see many of these peers, friends leaving tech at a consistent rate as well. Retention is a real problem in many sectors of tech.”

Job retention is a seemingly growing concern throughout various industries, including nonprofit sectors.

According to a recent Nonprofit Quarterly publication, a national diversity survey of 117 nonprofits revealed that only four percent of executives, eight percent of staff and five percent of board members identified as Native, Asian, Middle Eastern or multiracial with women representing roughly half of each category.

The survey also saw a significant turnaround rate for POCs. It reported, “Four out of 10 news nonprofit hires in 2019 were of people of color. Nonprofit outlets also saw employees of color depart in significant numbers, so net gains are smaller. For example, outlets hired a total of 41 Black employees but 27 left; they hired a total of 27 [Latinx persons] but 23…left. In comparison, organizations surveyed hired 153 white employees in 2019, and saw 89 depart.”

TwoFeathers Orton believes that employers can effectively combat these turnarounds and pay disparities by being more transparent and accountable when hiring and compensating employees.

“Many employers are allowed to keep these figures confidential, which in some cases is very understandable, but there is still an opportunity to look at the data and figures as a collective over time to identify trends, biases and discrimination that may not be perceived but certainly practiced, intentionally or unintentionally. These types of employer best practices could more easily be enforced and encouraged through policy,” said TwoFeathers Orton.

“I have to remind myself that these figures do not reflect the actual value of my education, training, expertise, and identity as a Native womxn but the failures of the system to safeguard my investment in my future as well as that of all of my teachers, mentors, and employers that helped along my path.”