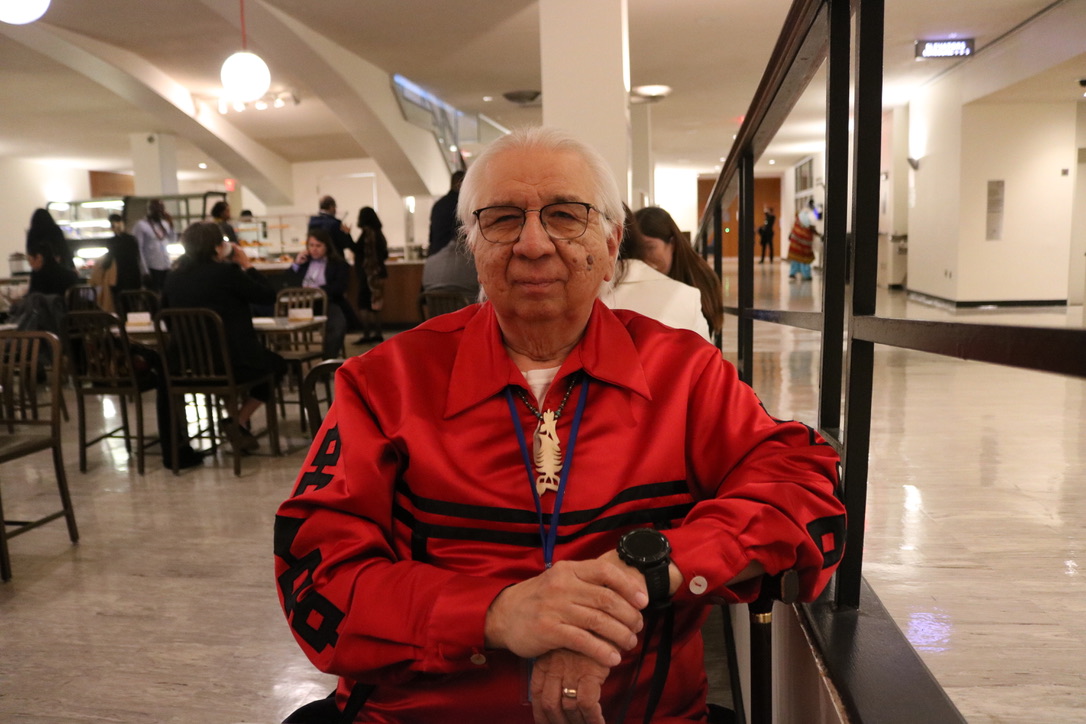 If there is a specialist on Indigenous peoples’ advocacy work and participation within the United Nations, it would likely be Kenneth Deer (Mohawk Nation of the Haudenosaunee).

Deer, 74, can rattle off the distinguished titles he’s held with various United Nations committees and working groups over the past three and a half decades. Native News Online sat down with the leader at the Vienna Cafe in the UN’s New York headquarters on Apr. 27 to hear about his experiences with the UN there and in Geneva, his institutional knowledge of its relationship with the recognition of Indigenous peoples, and his work contributing to landmark international policy. He is good-natured and sharp—closing his eyes to recall exact dates and what the UN’s ubiquitous organizational acronyms stand for—and wearing a red satin ribbon shirt and a cap reading “Native Pride,” his hair pulled back in a long white ponytail.

This interview has been edited for clarity and brevity.

Native News Online: What is the background on your involvement with the United Nations?

Kenneth Deer: I first went to the United Nations in 1987 to attend a working group on Indigenous populations. It was an eye-opening experience for me, because I never realized what was really going on at the international level. I found that the UN was drafting a Declaration on the Rights of Indigenous Peoples. I found this very fascinating, and I became involved year after year. At that time, the working group on Indigenous populations was doing the drafting, and it was made up of five human-rights experts. For one week before the meeting, the Indigenous people would meet. It was called the Indigenous people’s preparatory meeting, and it was organized by four Indigenous NGOs. From that meeting, we would develop text on the different articles of the Declaration.

Native News Online: Can you explain what the United Nations Declaration on the Rights of Indigenous Peoples (the Declaration) is, and what effect it has?

Native News Online: The Declaration was not adopted by the General Assembly until 2007. Why did it take so long?

Deer: It was so difficult to pass because there was a lot of resistance by states to Indigenous people. It took 25 years—from 1982 to 2007. It’s the longest negotiation over a UN declaration in history.

When the Declaration was voted on in 2007, there were four countries that voted against it: Canada, United States, Australia, New Zealand—the four children of Great Britain. They thought it was too strong.

Native News Online: What happened in 2010 with the four dissenting countries?

Deer: Australia was the first one. There was a general election, and the rights of the Aborigines were an issue in the campaign. One party said that if they got elected, they would ratify the Declaration. On the day [that party] won the election and became empowered, they announced that they would endorse the declaration—so that way, Australia was on board.

So now there’s three left. In 2010 here at the UN opening ceremonies, New Zealand made an announcement that they would endorse the Declaration.

Canada didn't want to be caught holding the bag after they heard that New Zealand and the United States were planning to revisit their dissenting votes. So they put out a press release at seven o'clock on a Friday, two weeks before the Permanent Forum on Indigenous Issues in 2010, to endorse the Declaration.

A couple of days later, the Secretary of State for the United States, Susan Rice, announced that the Obama administration was going to review their vote.

[In December 2010, the U.S. State Department released a 15-page document of qualified support.]

“In their statement, (the US) really says they supported a declaration to the point that it doesn't violate American law,” Deer said.

[Canada expressed qualified support until 2016, when Northern Affairs Minister Carolyn Bennett told the Permanent Forum on Indigenous Issues, “We are now a full supporter of the declaration, without qualification.”]

Native News Online: Many nations, tribes, and Indigenous organizations this week have testified that the United Nations Declaration on the Rights of Indigenous Peoples doesn’t do enough. Do you agree?

Deer: Yes. It is not a criticism of the Declaration to say that it doesn't do enough. Not all of our rights are in the declaration, but it’s still a very important document. Rights are always evolving.

Native News Online: Have you noticed much of a shift in the way that the Canadian government treats its indigenous people, based on the Declaration?

Deer:  I think there has been a change there. They have a piece of legislation called Bill C15 that will help implement the Declaration in Canada–not fully implemented, but it will help. There's some negotiations going on right now on how to develop a work plan and how to implement the Declaration. It's not perfect. I think there's some weaknesses in it, and we'll have to work on that.

Native News Online: What about changes within the UN Permanent Forum on Indigenous Issues? After decades of attending, are there any other policy changes you’ve helped usher through, or are currently working on?

Deer: I’m part of a committee on the enhanced participation of Indigenous peoples in the UN. That committee was formed in Quito, Ecuador, in January 2020. We already went through one cycle in 2016 and 2017 to get a new status for Indigenous people, something above an NGO, because we're not we're not non-government. We’re governments, so we need a higher status equal to permanent-observer status. That's the kind of status Indigenous peoples that are governing institutions should have.

Native News Online: How are you finding the Permanent Forum this year? Any noticeable changes from years past?

Deer: Normal sessions in the past have been three hours, 10 a.m. to 1 p.m. and 3 p.m. to 6 p.m. When the meetings went virtual, the interpreters said that it's much more difficult to do it virtually, so they shortened it to two hours.

I’m disappointed that we’re only having two-hour meetings, because we’re here in person. We lose hours, and that means a lot of people who are registered speakers won’t get a chance to speak because we run out of time. And not only that, but we're here in person. People who spend a lot of money to come here, they're in the room, and they don’t get to  speak. And some people who stay home and don’t spend any money are able to speak.

Native News Online: What do you see as the benefit of attending the Permanent Forum and other UN conferences?

Deer: We need avenues into the United Nations that are specific to Indigenous peoples. Access to the UN is limited, you have to depend on other forums, like women's rights and other campaigns. So there's nothing specific to Indigenous. That's why the Permanent Forum is important. And you can tell it's important because states are here making statements, because Indigenous people are here to criticize or complain about what's happening in their country. So it makes them show up.

It starts things, too. For instance, right now, you have a decade of the world's Indigenous languages initiative, and that came from here.

Native News Online: Any advice for Indigenous peoples–especially youth–interested in attending the UN, or even who are in attendance this year?

Deer: One of the things that's interesting about coming to the UN is that if you can't talk to your government at home, you can come here and meet the government here.

It’s important for people to know that… you’ve got to keep coming back. It's okay to go to a UN meeting and make the big speech, and then go home. But the real work is grinding it out and going back and getting to know the system, getting to know what to say and how to say it, and how to have an impact and build relations.