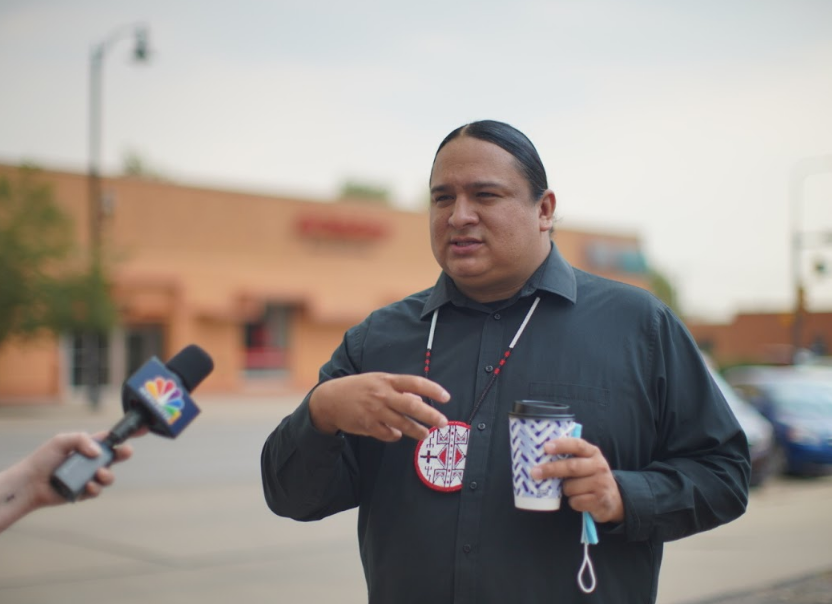 RAPID CITY, S.D. — Nick Tilsen (Oglala Sioux Tribe), the 38-year old president and chief executive officer of NDN Collective, will go to trial for three felony charges stemming from a July 3 protest in the Black Hills in the hours leading up to President Donald Trump’s visit to Mount Rushmore.

Tilsen was in court on Friday at the Pennington County Courthouse in Rapid City, S.D. for a preliminary hearing. Originally charged with two felonies last month, the county prosecutor added an additional felony against Tilsen for allegedly assaulting a law enforcement officer during the protest.

Tilsen’s charges include second-degree robbery and grand theft in the alternative, which means he can only be convicted of only one charge, not both. These charges stem from the riot shield that was taken briefly and spray-painted with the words “land back” on it. A law enforcement officer in riot gear was photographed using the shield as the militarized police line moved to contain and disperse the protesters.

“All that was determined in today’s hearing is that this case will go to trial, which we expected. I continue to stand strong alongside the other Land Defenders and as our cases progress we will continue to fight to get our #LandBack and tear down the system of white supremacy and racism in the process,” Tilsen said.

Two law enforcement officers testified during the preliminary hearing, alleging criminal actions by Tilsen: one being a male police officer, and the other a female member of the South Dakota National Guard who pushed back Land Defenders in what the Guard calls a “riot line.”

Tilsen is accused of stealing this riot shield that was apparently recovered in time to disperse the American Indian protesters. (Photo from Facebook)

“The cops aren't our enemy,” Tilsen assured viewers on a Facebook live video before the hearing. “But the systems of racism and what they represent are.”

Tilsen is being represented by Bruce Ellison, a Rapid City-based attorney, and Brendan Johnson, a former U.S. Attorney for South Dakota and son of former U.S. Senator Tim Johnson (D-SD).

“It is an honor to stand shoulder-to-shoulder with Nick in this case,” Johnson said. “We look forward to presenting our side of the story.”

The date for the trial was not determined on Friday but is expected to be announced this week.

Shortly after the hearing, Tilsen and a group of supporters walked together to deliver a petition with nearly 15,000 signatures to the office of State’s Attorney Mark Vargo urging him to drop the trumped-up charges against Tilsen. Tilsen’s father, Mark Tilsen Sr., handed the petition to Vargo and implored him to take the petition seriously and dismiss Nick’s charges.

“Nick is a father of four, a community leader who built the community at Thunder Valley dedicated to providing low-income housing. He’s dedicated to education, dedicated to the environment, to women and children, and has a huge national following,” Mark Tilsen Sr. said. “As his father, for our government to spend money to try to imprison community leaders like this, that’s the real crime.”

“These [Land Defenders] are community builders; these are the kind of young people we need working in our communities,” Mark Tilsen Sr. told Vargo. “I hope you take this request very seriously — it represents over 14,000 people in just a few days who signed this petition, and you’re going to see tens of thousands more in the months to come. I hope all these young peoples’ cases can be dismissed so they can get about their important work they’re doing to improve our community.”