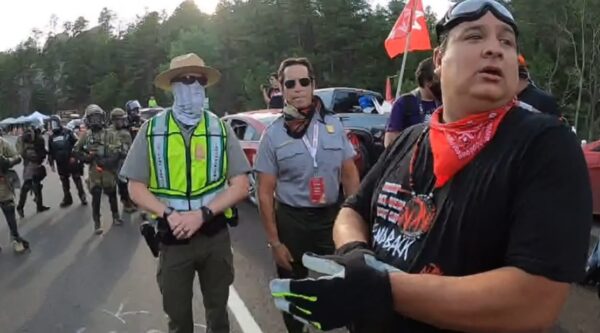 RAPID CITY, S.D. — One of the organizers of last Friday’s protest prior to President Donald Trump’s visit to Mount Rushmore was charged with multiple offenses at an arraignment hearing on Monday in Rapid City.

Nick Tilsen (Oglala Sioux Tribe), the 38-year old president and chief executive officer of NDN Collective, was one of more than 15 people arrested at the protest, which drew as many as 300 people.

Tilsen was charged with two felonies and three misdemeanors on Monday, including one count of robbery for allegedly stealing a riot shield from a police officer. The robbery charge, a felony, stems from the riot shield that was taken briefly and sprayed painted with the words “land back” on it. A law enforcement officer in riot gear was photographed using the shield as the militarized police line moved to contain and disperse the protesters.

Tilsen is accused of stealing this shield that was apparently recovered in time to disperse the American Indian protesters. (Photo from Facebook)Tilsen was also charged with simple assault, the other felony, after a law enforcement officer claimed she “feared for her life.”

The misdemeanor charges include one count of obstruction of highway; one count unlawful assembly; and alternating counts of disorderly conduct.

Tilsen’s lawyer Bruce Ellison and his family believe law enforcement and the state’s attorney office are targeting Tilsen for his role at the protest.

“He’s been treated in an unusual manner” because “he’s been identified as someone who had a leadership role,” Ellison said after the hearing, noting that Tilsen could have been released over the weekend like the other protesters who were arrested.

Based in Rapid City, S.D., the NDN Collective that Tilsen heads is a non-profit organization dedicated to Indigenous power through organizing, activism, philanthropy, grant making, capacity-building and narrative change.

In its news release, the NDN Collective quoted Tilsen before he was escorted away from the protest site Friday in handcuffs.

“Our people have fought for this land and we will continue to. This won’t be the last. Our goal isn’t just to resist, but to radically imagine a better future,” he said, according to the organization.

The news release also shared a comment from Krystal Two Bulls, a veteran and founder of Voices of the Sacred, who was also arrested on Friday. She said: “I’m a Native veteran, and here we have the national guard being deployed against U.S. citizens. The U.S. Military is the mechanism that upholds white supremacy and perpetuates militarism. We don’t need the military here, especially on this land, because this is Lakota territory. I’m a warrior, first and foremost I’m Oglala and Northern Cheyenne. Half of those soldiers down there probably don’t want to do this work. They have to follow orders. Deploying them on our own people, their neighbors and community members is wrong, and disgraceful. What I’m doing, in standing here for my people, that’s real service.”

Among those arrested on Friday, Tilsen was the only one held all weekend. He was released from jail Monday on a $2,000 bond. A resident of Porcupine, S.D., which is part of the Pine Ridge Indian Reservation, Tilsen faces 12 years in prison if convicted.

A trial for the charges against Tilsen has not been scheduled.