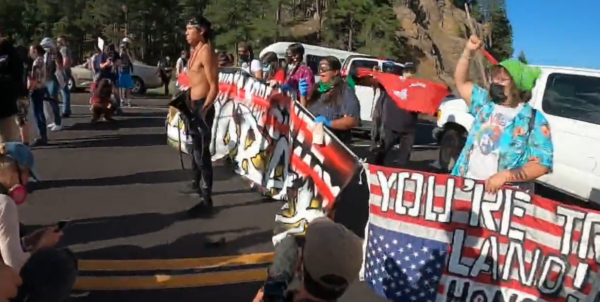 KEYSTONE, S.D. — In a twist of irony, American Indian protesters were met by Trump supporters yelling “go home” near the entry to Mount Rushmore on Friday.

The protesters were actually on their homeland as protected by the Treaty of Fort Laramie and upheld by a 1980 U.S. Supreme Court decision. The Sioux consider the Black Hills, where Mount Rushmore is located, sacred. They still refer to the sacred site as Paha Sapa.

“People were telling us to ‘go home’ and that’s where we were, on our sacred home lands. It shows how the american education system white-washes history and ignores the amount of injustice, genocide, and inequality that this country was built on,” Laura Ten Fingers (Oglala Sioux Tribe), one of the organizers, told Native News Online. 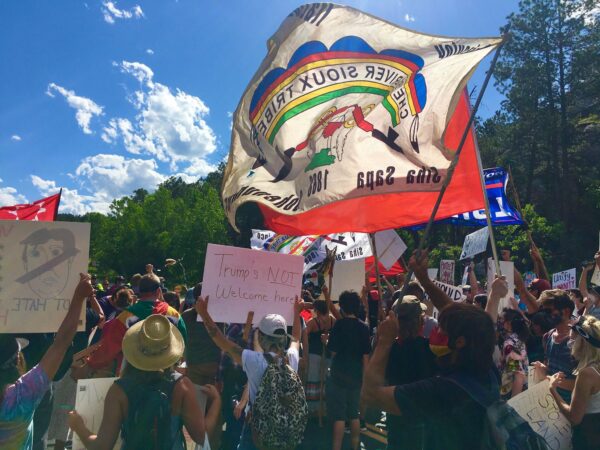 Photograph by Peter HillThe protesters, whose numbers approached 300 by late afternoon, began showing up hours before the president’s appearance to celebrate the United States’ 244th birthday at Mount Rushmore.

The protesters, mostly from South Dakota Sioux tribes, were there to let President Donald Trump he was not welcome in their homeland. However, the president flew into Mount Rushmore aboard Marine One with his wife.

During the demonstration, a group of Native women sang as police presence grew. In the crowd, some protesters carried signs with various messages. Among them were: “You’re on Stolen Land,” and “Land Water Defender,” and “Land back.”

Militarized police were on the scene and sprayed the protesters with pepper spray to disburse the crowd. By 7:15 p.m. (local time) 15 protesters were arrested for refusing to leave. Three vehicles that blocked the South Dakota highway were loaded onto flatbed towing trucks and impounded.

“The biggest message that we have been trying to send this entire time is that Mount Rushmore is a symbol of white supremacy and racial injustice in this country and that the four faces carved on that mountain are the four faces of colonizers who have committed genocide on Indigenous people,” Nick Tilsen (Oglala Sioux Tribe), the executive director of NDN Collective and one of the protest organizers, told the Rapid City Journal. 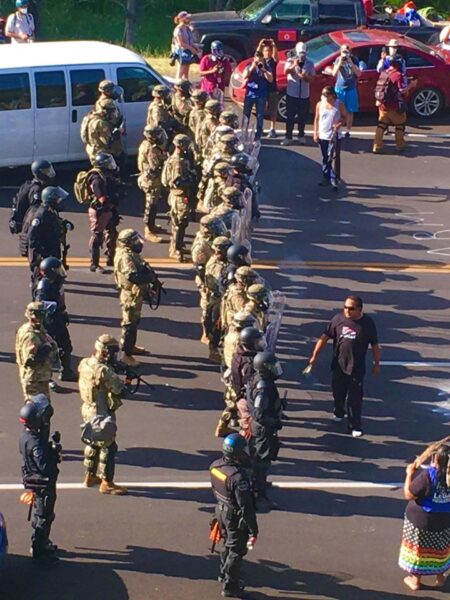 Lloyd Big Crow, Sr. smudged the military police. Photograph by Peter Hill.Tilsen was among those arrested defending their homeland.

“It was a day fueled prayers and resilience of our ancestors,” Ten Fingers said. “We were there protecting our lands from white supremacists and from the possibility of wildfires and water contamination in the Black Hills.”

Later, Trump delivered on the eve of the Fourth of July what several newspapers labeled a divisive speech aimed at garnering more support in the upcoming presidential election from his base.

Darren Thompson contributed to this story.