BELCOURT, N.D. — Renee Martin, the mother of Brandon Laducer, tells Native News Online that she feels the government has hid many details in the killing of her son by law enforcement on the Turtle Mountain Indian Reservation in North Dakota. 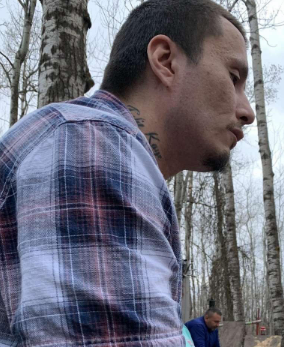 She says every governmental law enforcement agency, from tribal police, county police to the FBI, has given her the cold shoulder.

Other than what Martin has shared, there isn’t much information available to the public on what exactly happened on the evening of Saturday, Aug. 22, 2020. Native News Online previously reported that Laducer’s mother was notified by police that there were five shots fired in the incident, but according to witnesses at least 20 shots were fired.

Although not yet released to the public, Laducer was shot 11 times by law enforcement in the late evening on Saturday, Aug. 22, 2020, according to Martin, who saw his body after the autopsy in Rolla, N.D.

However, what she doesn’t know is who fired the fatal shot and if that person had jurisdiction to be on the Turtle Mountain Indian Reservation.

Scene of where Brandon Laducer was killed by a police officer on August 22, 2020 on the Turtle Mountain Indian Reservation. (Courtesy photo)

FBI spokesperson Kevin Smith shared in an email to Native News Online on Aug. 25, 2020 that the circumstance of the incident, including how Laducer died, the reason for the law enforcement response, and the officer’s identity who was placed on administrative leave, were still being investigated by the FBI.

A month later, on Sept. 30, E&E Daily reported an officer with the Bureau of Indian Affairs shot and killed 35-year-old Laducer at a private residence on the Turtle Mountain Indian Reservation in North Dakota.

Nearly four months later, Martin asks, “They don't want the truth to come out, and at the end of the day, he has two young children who are in shock that their father is no longer here.”

“He was a really good dad,” said Martin of her son.

In an email, Smith said, “It is quite typical for investigations like this one (and most of our FBI investigations, for that matter) to take much longer than people think they should.”

“There is a lack of humanity, a lack of compassion,” Martin said of the government in trying to find out more information about her son’s death. “I’ve never had experiences with law enforcement and since this has happened, my feelings have changed towards law enforcement.”

“It has been inhumane the way they treat us, especially tribal women,” Martin added.

“When we (FBI) are done, we will turn our investigation over to the U.S. Attorney’s office in North Dakota for any charging decision,” said Smith in an email.