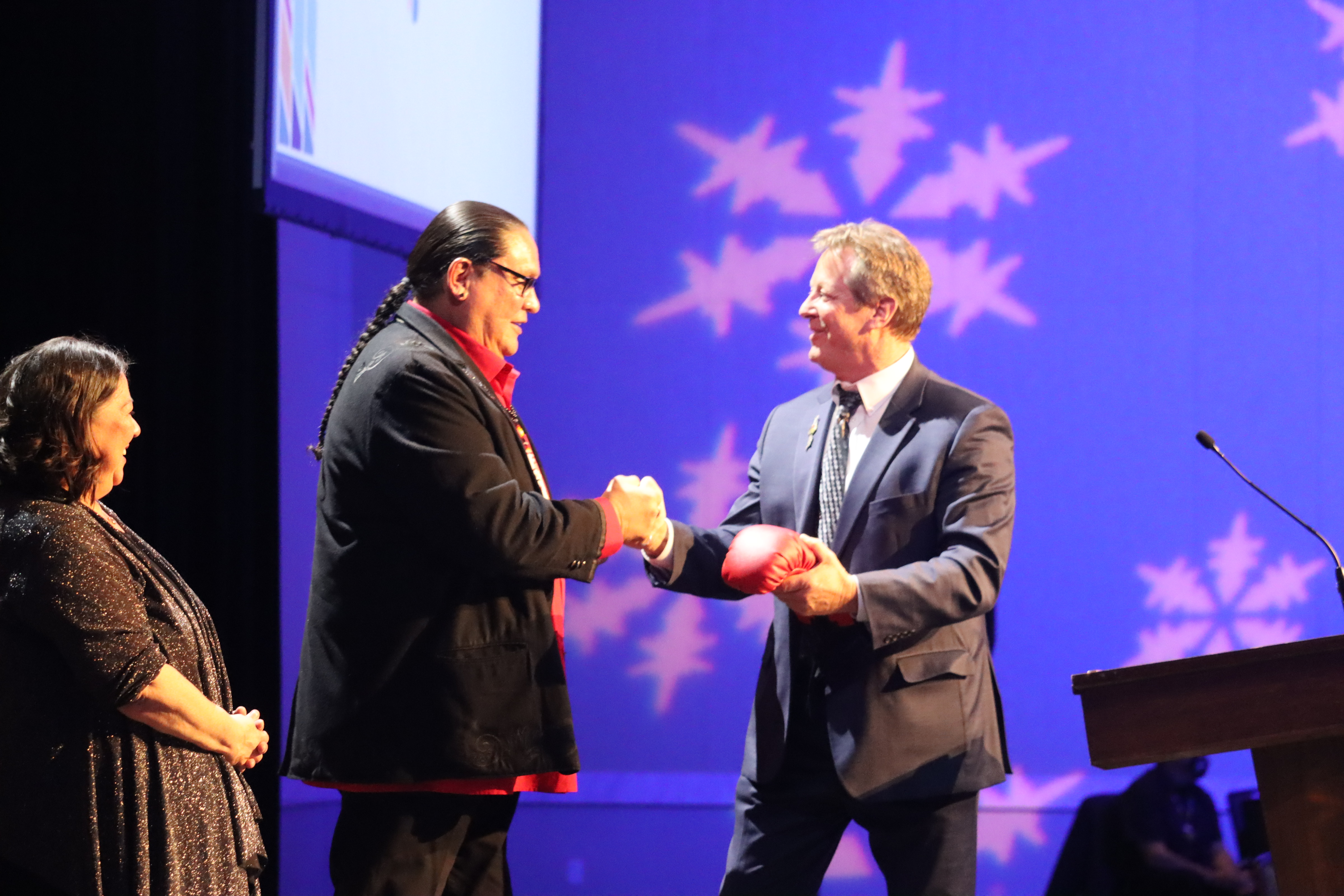 PRIOR LAKE, Minn. — After a two year hiatus due to the coronavirus pandemic, the Minnesota American Indian Chamber of Commerce (MAICC) hosted its 33rd annual dinner on Friday at the Mystic Lake Casino. More than 400 people attended the popular gala and awards show that highlights tribes, tribal leaders, and tribal entrepreneurs in Minnesota and beyond.

The dinner was opened with a prayer by Jerry Dearly, Sr. and comments about the pandemic during the last couple of years by MAICC’s Secretary and Treasurer Rebecca Crooks-Stratton. Joanne Whiterabbit, MAICC’s Executive Director, spoke about the evening’s event and requested an honor song by Spirit Boy Singers to be presented to Ernie Stevens, Jr., the National Indian Gaming Association’s long-standing chairman.

“There are so many people in this room who have benefitted from the leadership and generosity of Ernie Stevens,” said Whiterabbit during the presentation. She was presented a lifetime achievement award by the National Indian Gaming Association by Chairman Ernie Stevens, Jr.

After the honor song, Minnesota Lieutenant Governor Peggy Flanagan, a White Earth tribal member, introduced Minnesota Governor Tim Walz. “Our Tribal Nations have done better than our state in dealing with Covid-19,” said Walz during the dinner. “Over the last 163 years, there’s been a system that has been set up to not work for tribal nations. Our administration has tried to change that, and we codified into law that the state must deal directly with each of our 11 tribal sovereign nation—not when we feel like, but every time there is an issue.”

The MAICC later presented Stevens with a signed boxing glove by Muhammad Ali, who passed away in 2016.

“I only met Muhammad Ali one time, but his family requested I attend his funeral because when they needed American Indians to show up for him, they did,” said Stevens, Jr., when he received his award. “He showed up when we needed him,” Stevens said. Muhammad Ali joined the Longest Walk in 1978 and advocated for the rights of American Indian people for many years.

Whiterabbit shared with the event a new initiative and partnership with BIG3, a 3-on-3 basketball league founded by hip hop musician and actor Ice Cube. The league consists of 12 teams whose rosters include both former NBA players and international players. Ice Cube, and the executive leadership, have shared with Whiterabbit that the organization is organizing tournaments that will travel to various reservations to benefit youth in local communities. It will be aptly named after Ernie Stevens, Jr., a longtime basketball player, fan and supporter. More information will be shared when it becomes available.

“There’s nothing that could have gone better with tonight’s evening,” said Joanne Whiterabbit to Native News Online. “We have so much work to do and we’re so glad that we’re able to gather again.”