Lummi Woman Disappears in Las Vegas, on Trip with Fiancé and Friends 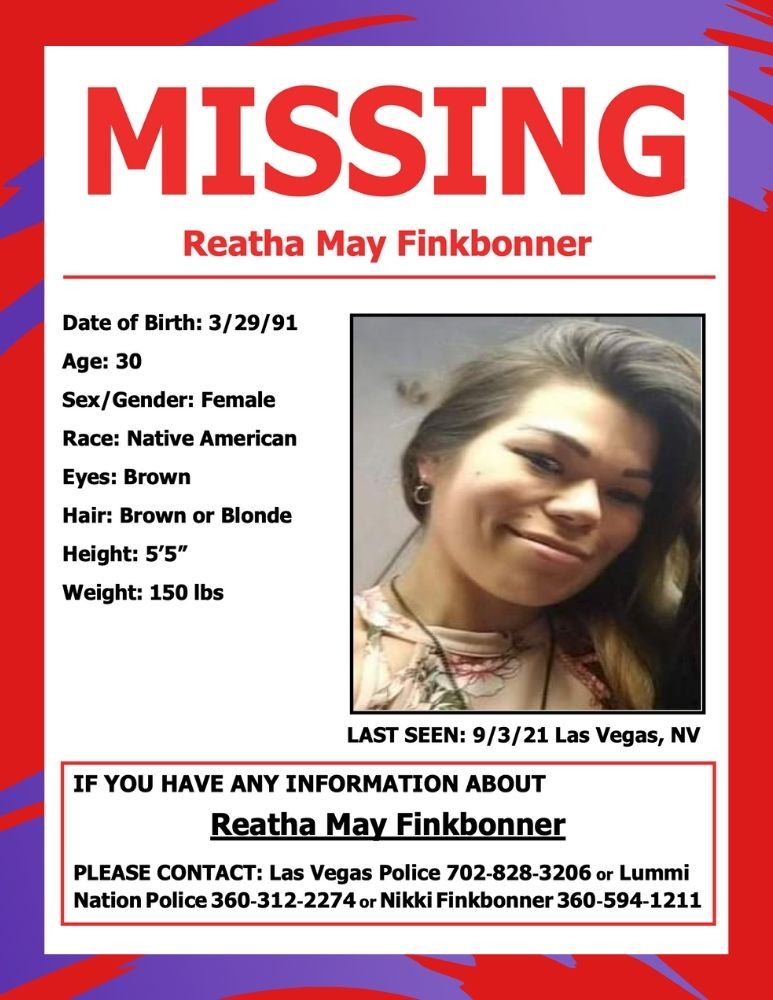 LAS VEGAS — What began as a vacation to Las Vegas has turned into another case of a missing Indigenous woman. Missing is Lummi Nation tribal citizen Reatha May Finkbonner, 30, who went to Las Vegas with her fiancé and friends.

[UPDATE:  Reatha Finkbonner has been found alive in Las Vegas.  We have published an update story.]

Finkbonner, who resides on the Lummi Nation in Bellingham, Wash., was last seen in front of Bridger Inn Motel at 301 S. Main St., Las Vegas, according to a witness who last saw Finkbonner.

“She is a Lummi tribal member, lives on the Lummi Nation, and is a daughter, niece, mother, friend and sister,” Nikki Finkbonner, aunt of Reatha, told Native News Online. “She’s human.”

When she filed the missing person report with the Lummi Nation Police Department,  she said was met with indifference and an uncaring demeanor. “The reporting officer who took my statement for my niece’s missing-person’s report told me that tomorrow is his Friday,” said Finkbonner. “I was met with uncaring law enforcement that generally said that my niece is off partying in Las Vegas.”

“At first, the police told me they couldn’t get involved because of jurisdictional reasons,” said Finkbonner. “It was back and forth with multiple law enforcement agencies.”

Since the national media coverage of Gabrielle Petito’s disappearance, and later discovery of her remains in the Grand Teton National Park in Wyoming, many questioned the bias in the media. Petito’s family filed a missing person report on Sept. 11 and a nationwide search by law enforcement found her remains on Sept. 19, only 8 days after her initial report was filed.

Since the story of Gabby Petito has flooded the nation, Finkbonner’s case has gained some attention among other media sources.

“I can’t believe how much attention this case is getting after the Gabby story,” said Finkbonner. “Before the story, there was nothing by any media and now CNN, ABC, CBS, NBC, and every other major publication has been reaching out to learn more.”

“All of our lives matter. I don’t understand how Indigenous women are always after the fact,” Finkbonner said of the growing media attention.

Reatha's fiance and friends are not cited as suspects and haven't been investigated, according to Nikki Finkbonner. "I'm so disappointed with the Lummi Nation Police Department."

According to the Las Vegas Police Department’s website, there are 200 individuals reported missing monthly in Las Vegas. Most are found or voluntarily return home within 48-72 hours after being reported.

Reatha Finkbonner is a mother of two children. She has brown eyes and brown or blond hair, is 5 feet, 5 inches tall and weighs approximately 150 pounds.

Anyone with information about Reatha Finkbonner’s whereabouts is asked to contact Lummi Nation Police Detective Sgt. Richard Hart at 360-312-2274 or Las Vegas police at 702-828-3111.

Finkbonner is on the Washington State Patrol’s list of missing Indigenous persons, which was released Monday, and the Lhaq’temish Foundation, a nonprofit that supports the Lummi Nation, is sharing information about Finkbonner.

A fundraiser to find Reatha Finkbonner has been organized by the Lhaq’temish Foundation and donations can be sent via Paypal.