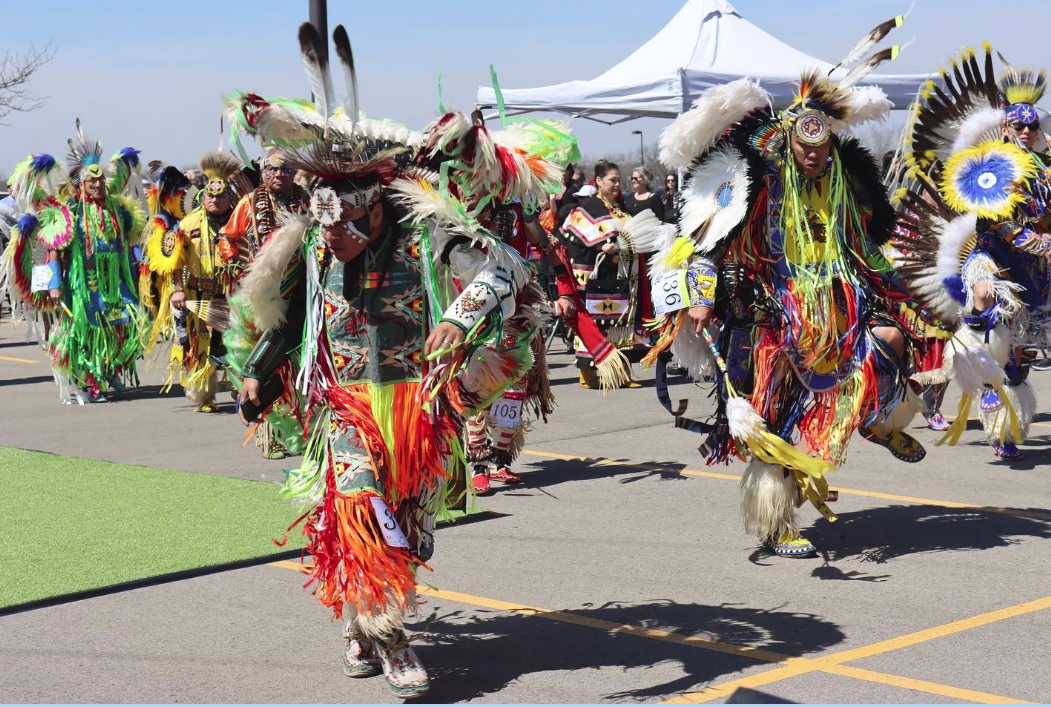 LAWRENCE, Kan. — The University of Kansas’s First Nations Student Association (FNSA) hosted its 33rd annual powwow and 5th annual Indigenous Cultures Festival at the University's Lied Center on Saturday, April 9 to a crowd that numbered in the thousands.

The powwow featured more than 100 registered dancers, the Haskell Color Guard, and several drum groups including Southern Boyz (Lawton, Okla.) as the host drum, Motown Singers (Red Lake, Minn.) as invited drum, Moose Hill and Jesse St. John, Crow Creek Dakota as the powwow’s Master of Ceremonies. The powwow grounds had dozens of vendors selling art, crafts, clothing, food, and other merchandise. Due to space needed for the entire day’s event, the powwow was hosted outside in the parking lot.

“COVID-19 interrupted a lot of our plans and wasn’t sure if the powwow would happen this year,” said KU Powwow Master of Ceremonies Jesse St. John to Native News Online. “It was a privilege to be asked again this year.”

Rep. Davids, who is a tribal citizen of the Ho-Chunk Nation, read her book, “Sharice’s Big Voice: a Native Kid Becomes a Congresswoman,” co-authored with Nancy K. Mays to a group of youth on the Lied Center’s main stage. Her book tells her personal story of how Davids was one of the first Native American women elected to Congress, and the first LGBTQ congressperson to represent Kansas.

The evening’s grand entry featured an honor song for Rep. Davids, with many joining the powwow circle to shake the congresswoman’s hand. University of Kansas’s Director of Basketball Operations Fred Quartlebaum also made an appearance with the NCAA Men’s Basketball Trophy, allowing people to see and take pictures with the trophy that was won on Monday against the University of North Carolina.

“As a basketball announcer and a powwow MC, it was awesome to announce at the University of Kansas, especially as they are the National Champions this year,” said St. John. “Once in a lifetime opportunity to even be in the presence of the [National Championship] trophy.”

Organizers said that it’s possible that next year’s powwow will have its own grounds on the University’s campus due to the growing of the event.