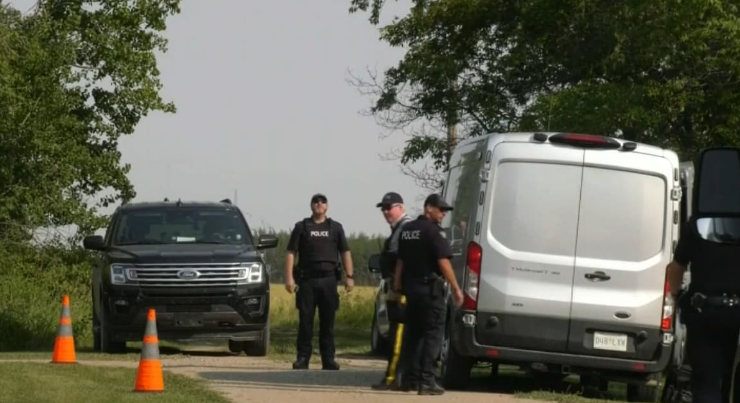 UPDATE: The main suspect in a mass killing in Canada is not hiding on James Smith Cree Nation, the Royal Canadian Mounted Police said on Tuesday afternoon.

The update reverses an RCMP alert earlier in the day telling residents of Cree Nation to take shelter after a reported sighting of Myles Sanderson, 32, the primary suspect in the in the mass stabbing deaths of 10 people and injuries of 18 others in over the weekend.

Canadian law-enforcement authorities said the Sanderson's location is still unknown and are urging the public to remain cautious.

The other suspect in the killings, Damien Sanderson, 31, was found earlier Monday dead. Details of his death were not announced during a law enforcement press conference.

His brother, Myles, is still at large and should be considered armed and dangerous, according to Saskatchewan RCMP Commanding Officer Assistant Commissioner Rhonda Blackmore, who spoke at a press conference late Monday afternoon.

[READ: 10 Dead, 15 Others Injured in Multiple Stabbings On or Near James Smith Cree Nation in Saskatchewan]

Blackmore said law enforcement believe Myles Sanderson, 30, sustained unspecified injuries. She did not elaborate on when or how he became injured.

“His injuries, we can’t confirm those injuries, but we do have strong reason to believe that he has sustained some injuries. We’re not exactly sure what those injuries are,” Blackmore said.

"But we do want the public to know this because there is a possibility he may seek medical attention,” she added. “Even if he is injured, it does not mean he is not still dangerous.”

Law enforcement officials said Myles Sanderson has an extensive criminal record that involves crimes both personal and property related. The personal related crimes involved violence. He has had a warrant out for his arrest since May 2022.

An investigation is underway into the horrific killings that took place on the James Smith Cree Nation and village of Weldon, Saskatchewan. Law enforcement officials say a motive is not yet known as to why the brothers went on the stabbing spree.

Native News Online reached out to the James Smith Cree Nation on Monday with no response by press time.