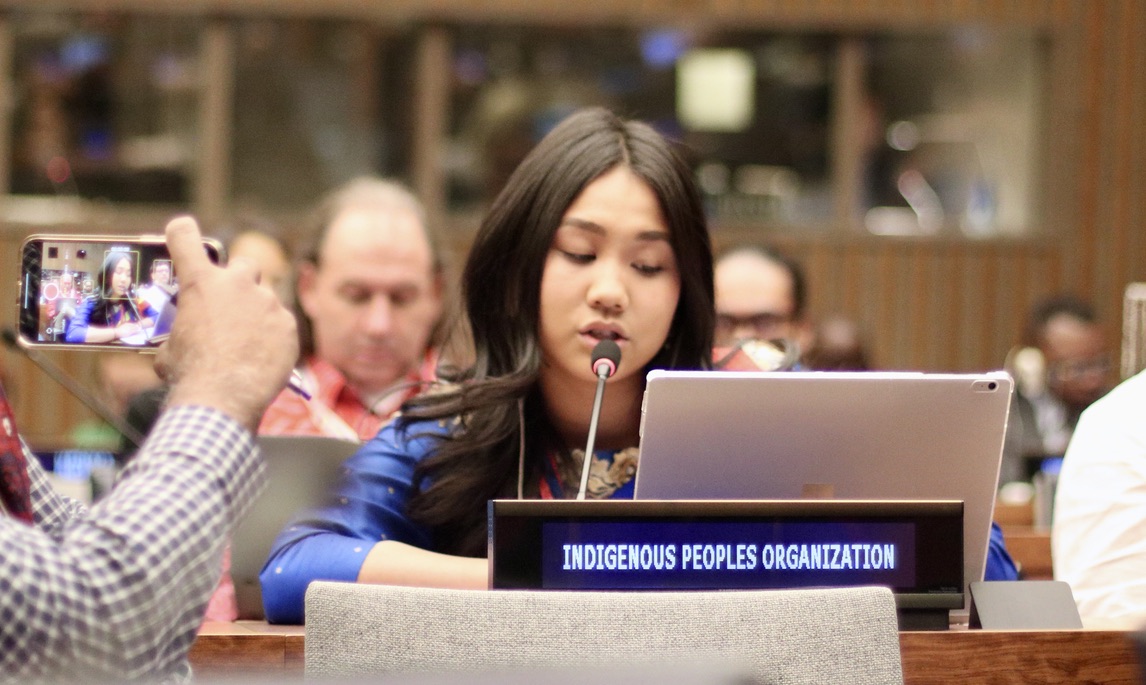 NEW YORK—On the floor of the United Nations Permanent Forum on Indigenous Issues at its New York headquarters, there are many apparent divides between nation-states and participating Indigenous peoples and their institutions.

First, physically: In the main conference room where discussions were held from April 25 through Friday, May 6, the UN’s 193 member states sat on the right side of the room, while representatives of Indigenous peoples—including those with their own governments—sat on the left.

Second, the member states and the “permanent observers,” such as the Vatican and Palestine, each had a name card on their desk specifically identifying them. The Indigenous groups, including the Cherokee Nation, the Shawnee Nation, the National Congress of American Indians, the Assembly of First Nations, and many other tribal governments and entities, were all grouped together, labeled simply as “Indigenous Peoples Organization.”

“There are groups here that are communities that come together in common cause, like the… [Union of Reindeer Breeders of Yamal-Nenets autonomous Okrug]. I’m equal to that?” Chief Ben Barnes of the Shawnee Nation told Native News Online.

Kenneth Deer (Mohawk Nation of the Haudenosaunee) has worked to increase Indigenous participation at the UN in various capacities since 1987. During preparations for the World Conference on Indigenous Peoples in 2014, he said, the Indigenous peoples’ representatives felt they had no avenue to speak on issues that affected them, so they “expressed themselves very clearly that they needed a status in the United Nations that recognizes [their] right to self-determination.”

Three years later, the UN General Assembly adopted a resolution on enhancing the participation of Indigenous peoples, including recognizing “the need to find ways and means of promoting the participation of Indigenous peoples’ representatives and institutions within the United Nations system on issues affecting them, given that they are not always organized as non-governmental organizations.”

What are the different statuses granted by the United Nations General Assembly?

Each of the UN’s branches and agencies has its own participation requirements. In the General Assembly, where the Permanent Forum on Indigenous Issues takes place, the hierarchy is a member state that represents a country and votes on resolutions; a permanent observer, such as the Holy See and Palestine, that has the right to speak at General Assembly meetings, but not to vote on resolutions; and a non-governmental organization (NGO), which has restricted speaking rights and no voting rights.

During the Permanent Forum on Indigneous Issues, member states can reply to statements at any time, whereas NGOs and Indigenous peoples’ organizations have to sign up to speak days beforehand and submit their statements in advance, and they are allowed to speak only once during each session.

“If we can't be full members with a vote, then we should have a status one step below that, equivalent to permanent observer status,” Deer said during a regional consultation for North America on May 3. “We are not non-government entities. We are governments in our own right, so the term NGOs does not suit Indigenous peoples. NGOs don't have self-determination, people have self-determination.”

In January 2020, just before the COVID-19 pandemic took hold of the world, a Temporary Committee on Enhanced Participation of Indigenous Peoples met during the UN forum held in Quito, Ecuador. Its mission was to breathe new life into the campaign for “Indigenous Representative Institution” status that had lapsed three years earlier, after several member states, including Russia, India, China, Vietnam, Pakistan, and Egypt, petitioned to oppose elevated status for Indigenous peoples.

Deer is the North American representative on the temporary committee (“temporary” meant until the next Permanent Forum met), which includes Indigenous representatives from each of seven “Indigenous socio-cultural regions” around the world: Africa; the Arctic; Asia; Central and South America and the Caribbean; Eastern Europe, Russian Federation, Central Asia and Transcaucasia; North America; and the Pacific.

“Our role is to organize and coordinate the campaign for enhanced participation,” Deer said.

“If you're not at the table, you're likely on the menu.”

The campaign has widespread support from Indigenous peoples’ governments and organizations, and from countries such as Mexico, Canada, Finland, Norway,  New Zealand, Australia, Ecuador, and Bolivia. Deer said The United States also expressed support for the enhancement of Indigenoos People in the UN.

Assembly of First Nations Chief RoseAnne Archibald, participating in the meeting hosted by Canada on May 3, said gaining the enhanced status is a matter of human rights, as outlined by the United Nations Declaration on the Rights of Indigenous Peoples.

“The truth is that member states continue to grow rich and benefit from the suppression and oppression of Indigenous nations around the world,” Archibald said. “I've always said this— and our Prime Minister has said it, as well—that there must be truth before reconciliation. And this means having a seat at the table, a chance to self-determine our present and future realities consistent with the principles of free, prior, and informed consent.”

Quoting Wilton Littlechild, a longtime First Nations participant at the United Nations, among people from other movements who often preach it, she said: “If you're not at the table, you're likely on the menu.”

Deer said Indigenous peoples have a lot to gain by enhanced participation in international institutions.

“If we abandon the international level, then it will be a loss because states will make decisions that impact us and not take us into consideration,” he said. “We have to be there, win or lose. We have to be there to fight to protect our rights as Indigenous peoples.”

Despite the UN appearing dominated by Indigenous peoples in their intricate and specific regalia last week, Andrea Carmen (Yaqui Nation), executive director of the International Indian Treaty Council, told Native News Online that the UN is not an Indigenous body.

“This is not an indigenous body, it's a United Nations body. It belongs to the states,” she said. “I do a big training for the Permanent Forum, and all the Indigenous people come to this training, and I tell them, ‘do not go under the illusion that this is our body here. This belongs to the states, and we've learned how to use it very well.’”

Carmen served as the North American representative for enhanced participation of Indigenous Peoples on the Temporary Committee before Deer.

Next, the Temporary Committee will negotiate with states and Indigenous peoples to set the criteria for enhanced-participation status.

In October, it will host a four-day workshop in Geneva, Switzerland with states and indigenous peoples to discuss who will receive the enhanced status, what the requirements to gain it will be, who will decide who gets it, and what having that status will enable them to do (for example, will permanent observers be able to participate in negotiations).

Stacey Lambert, Crown-Indigenous Relations representative for Canada, told Native News Online that Canada has been advocating for enhanced participation for Indigenous peoples since the World Conference in 2014.

“It has been a difficult issue in terms of convincing member states that are not excited about the idea of expanding membership in the United Nations to come on board with the idea, but we continue advocacy with Indigenous partners,” Lambert said, “Essentially, to try to help other member states to understand that no sky falls when Indigenous people speak for themselves at the United Nations. They are doing so already, they just aren't given the access that they should be given and the voice that they should be given.”

Deer said that the campaign’s objective is to get at least one body within the UN—either the General Assembly or the Human Rights Council—to recognize a status for Indigenous peoples equivalent to that of a primary observer.

“If you get one of them, other members of the UN can follow suit,” he said. “It gives leverage for Indigenous people to say, ‘Hey, we got the status and the Human Rights Council, we want it at the General Assembly, we want it at the World Bank, we want it at UNESCO. That's how you open the door. You create a wage and you push that wedge deeper and deeper so it gets the door wider and wider.”